Yesterday The Conservative Treehouse posted an article that illustrates what the investigation into the misuse of government agencies for political purposes is up against. One Judge, Judge Emmet Sullivan, is requiring the Mueller team to provide records regarding their investigation.

Among other evidence, the judge ordered the government to file on the public docket “the transcript of the voicemail recording” from President Trump’s attorney John Dowd to Michael Flynn.  The transcript of that voicemail recording was cited in the Mueller report as evidence that team Trump was trying to obstruct justice by shaping witness testimony.

Below are the original and edited transcripts: 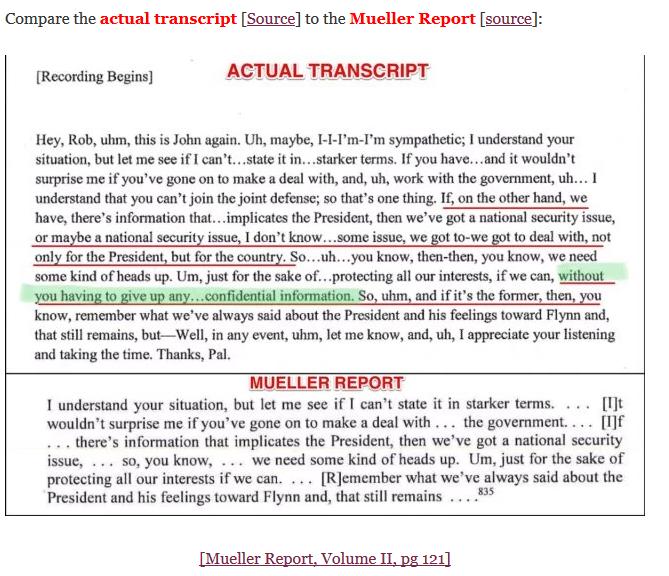 Notice how Mueller leaves out (via edits) the context of the call, and the important qualifier: “without you having to give up any confidential information.”   Clearly Dowd does not want to interfere in Flynn’s cooperation with the special counsel, which is opposite to the twisted claim presented by Weissmann and Mueller’s report.

The article includes the text of some emails between Peter Strzok and Lisa Page:

♦Strzok replies: “I know. I just talked with John, we’re getting together as soon as I get in to finish that write up for Andy (MCCABE) this morning.” Strzok agrees with Page about being stressed that “THIS” could go off the rails… (Strzok’s meeting w Flynn the next day)

So what is that about?

Why would Page & Strzok be stressed about “THIS” potentially going off the rails?

The answer is simple: they knew the content of the phone call between Mike Flynn and Sergey Kislyak because they were listening in, and they were about to exploit the Pence statement to CBS.  In essence they were admitting to monitoring Flynn, that’s why they were so nervous.  They were planning and plotting with Andrew McCabe about how they were going to exploit the phone-tap and the difference in public statements by VP Mike Pence.

There’s a good possibility Flynn was honest but his honesty contradicted Pence’s national statement on CBS; and Flynn likely tried to dance through a needle without being overly critical of VP-elect Pence misspeaking.   Remember, the alternative: if Flynn is brutally honest, the media now runs with a narrative about Vice-President Pence as a national liar.

It is becoming more and more obvious that the deep state entities in the government were using the tools of government to overturn the will of the American voters–they were engaged in a coup. I don’t know if we still hang people, but everyone involved needs to go to jail.

Joe DiGenova Victoria Toensing have an unmatched track record in explaining the events we see in the media and predicting the forthcoming revelations. The American Thinker posted an article today highlighting Joe DiGenova’s Monday appearance on WMAL radio’s Mornings on the Mall radio show.

This is the audio ofJoe DiGenova discussing declassification on Fox News (posted at YouTube):

Some highlights from Joe DeGenova’s comments made on the radio program as reported in The American Thinker:

The basic story is that Admiral Mike Rogers, who was head of the NSA in the spring of 2016, discovered that the NSA’s comprehensive database collecting all electronic communications in the United States was being searched by unauthorized FBI “contractors” and moved to cut off that access.  He also visited Donald Trump, after which Trump moved his campaign HQ out of Trump Tower.  Trump’s much derided claim that his campaign was “wiretapped” likely also was the result of gaining this insight from Admiral Rogers.

Sundance at The Conservative Treehouse is quoted in The American Thinker article:

Tens of thousands of searches [of the NSA database] over four years (since 2012), and 85% of them are illegal. The results were extracted for?…. (snip)

OK, that’s the stunning scale; but who was involved?

And as noted, the contractor access was finally halted on April 18th, 2016.

[Coincidentally (or not), the wife of Fusion-GPS founder Glenn Simpson, Mary Jacoby, goes to the White House the next day on April 19th, 2016.]

None of this is conspiracy theory.

All of this is laid out inside this 99-page opinion from FISC Presiding Judge Rosemary Collyer who also noted that none of this FISA abuse was accidental in a footnote on page 87: “deliberate decisionmaking“: (snip)

All of this is expected to be confirmed as the declassification ordered by President Trump occurs. It is unfortunate that the only way to get the truth out (if the media chooses to report the truth after it is exposed) is through declassification. Those attempting to take down President Trump buried their tracks fairly well. It is unfortunate that some of the people who betrayed the American people held high offices in the government and should have protected the American people from unauthorized surveillance instead engaged in that surveillance for political gain. I have a feeling that the next shoe will be dropping soon.