On December 3, 2019, the Center for Security Policy posted the following Press Release:

The Center for Security Policy is pleased to announce the publication of a new monograph by Stephen M. Kirby Ph.D. entitled Islamic Doctrine versus The U.S. Constitution: The Dilemma for Muslim Public Officials. Dr. Kirby’s timely book anticipates the 2020 election season to come with a consideration of how starkly Islamic Law differs from the U.S. Constitution in a work that is at once informative, sober, and scholarly.

Building on a series of essays that author and scholar Dr. Kirby first published at PipelineNews.org, this new book from the Center expands on the myriad ways in which Islamic Law (shariah) is antithetical to the U.S. Constitution. After introducing an overview of Islamic doctrine in brief form, Dr. Kirby then focuses on six key Amendments to the Constitution as enshrined in the Bill of Rights. In choosing these six, he both educates and horrifies any who may not have been aware of the sheer physical brutality of shariah, even aside from its explicit and tyrannical antipathy to individual liberty, free speech, and concepts such as equality of all before the rule of man-made law and government by consent of the governed.

The Center’s publication of Dr. Kirby’s book could hardly be more timely, as Muslim Brotherhood/HAMAS front groups such as CAIR (Council on American Islamic Relations) and its affiliate at Jetpac, Inc. make no secret of their intention to seed this country’s political electoral process with selected, vetted, and groomed candidates who are aligned with the Brotherhood’s jihadist agenda to foist shariah on an unwilling—but all-too-often unaware–-American electorate. Written in a lucid, readable style that takes the Bill of Rights Amendments 1, 2, 4, 8, 13, and 14 in turn to contrast them with the utter lack of those Amendments’ protections under shariah,  Islamic Doctrine versus The U.S. Constitution: The Dilemma for Muslim Public Officials provides a useful handbook for the patriot citizen who understand that shariah is antithetical to the Constitution, but would like some additional pointers to rebut the plethora of Islamic apologists and taqiyya operatives out there.

The final chapter of the monograph offers even more specific ideas for those who may attend an upcoming rally, speech, or townhall featuring a Muslim candidate for office at whatever level, from local to the U.S. Congress. Here, Dr. Kirby provides a set possible questions that might be posed (with courtesy and respect) to such a candidate to help discern exactly where that candidate stands with respect to the obligatory adherence to shariah that is binding on all Muslims.

The monograph is included in the article, along with links to buy the paperback or Kindle version or download the free PDF. Considering the many conflicts between the Quran and the U.S.  Constitution and the principle of taqiyya, this is a very timely work. The Quran advocates shariah law, which is totally antithetical to the rights of women and general personal freedom. As voters, we need to make sure we do not open the door for shariah law to come to America.

This is how women dressed in Iran before the Revolution: 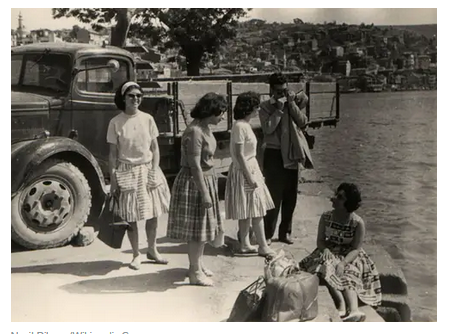 Now dressing like that would get you arrested. We don’t want that here.

This is the video of part of President Obama’s final speech to the United Nations. The video is posted on YouTube:

On the surface, cooperation among nations is a really good idea to fight terrorism, but let’s look closely at what he said.

We have to put our money where our mouths are. And we can only realize the promise of this institution’s founding to replace the ravages of war with cooperation if powerful nations like my own accept constraints. Sometimes I’m criticized in my own country for professing a belief in international norms and multilateral institutions, but I’m convinced in the long run giving up some freedom of action, not giving up our ability to protect ourselves or pursue our core interests but binding ourselves to international rules, over the long-term, enhances our security.

Note the words “if powerful nations like my own accept constraints.” Let’s take a close look at that idea. Remember President Obama’s statement, “The future must not belong to those who slander the prophet of Islam.” One of the major political blocs in the United Nations is the Organization of Islamic Cooperation (OIC). The ultimate goal of the OIC is to institute Sharia Law around the world–on Muslims and non-Muslims alike. They are subtle in their approach to this and began with the Cairo Declaration, which came into play during the United Nations’ work on the Universal Declaration of Human Rights. Please understand that not everyone has the same definition of Human Rights.

This is the quote from the Cairo Declaration regarding free speech:

(a) Everyone shall have the right to express his opinion freely in such a manner as would not be contrary to the principles of the Shari’ah.

(b) Everyone shall have the right to advocate what is right, and propagate what is good, and warn against what is wrong and evil according to the norms of Islamic Shari’ah.

The OIC routinely orchestrates a “Day of Rage” when they believe Islam has been insulted. A ‘crisis event’ is chosen, appropriate flags or banners are obtained, rioters are assembled, and the riots begin. What President Obama is saying is that in order to bring peace, Americans may have to give up their freedom of speech, expression, etc. That is the imposition of one of the principles of Sharia Law on a non-Muslim country. The Muslim Mayor of London has moved to ban all scantily dressed models in advertising, citing the concept of ‘body shaming,’ a new word introduced for purposes that will be obvious down the road. Again, the Mayor is beginning to impose modesty standards (a step toward Shari’ah Law) on a non-Muslim population.

The YouTube video below tells us all we need to know:

You have a choice in this election–do you want to continue the policies of President Obama or is it time for a change of direction?

On Thursday, the Detroit Free Press posted an article about Umar Farouk Abdulmutallab, also known as the underwear bomber, who has asked to be released from prison because, as he states, “all Muslims should only be ruled by the law of the Quran.” That is a very interesting statement when you look at it.

Abdulmutallab, who has insisted on representing himself, is scheduled to go to trial Oct. 4 on charges he tried to blow up a passenger airliner with 279 passengers and 11 crew members on Christmas Day 2009 with a bomb in his underwear.

Au­thorities have said that Abdulmutallab is an al-Qaida operative trained in Yemen for the sui­cide mission, which was foiled when a passenger subdued Abdulmutallab. He is facing nu­mer­ous criminal charges, including conspiracy to commit terror­ism.

One of the tenets of the law of the Quran is jihad. The Hadiths (sayings of Mohammed) and interpretations of the Quran command Muslims to carry out jihad until all of the Dar al-Harb (the House of War, where shariah law is not enforced) is brought under the domination of Dar al-Islam (the House of Islam, where shariah law is enforced). In other words, Abdulmutallab was obeying shariah law when he tried to blow up that airplane. Under shariah law, he is not only not guilty of a crime, he is to be commended.

It will be interesting to watch this case unfold. What was needed here was the military trial of a terrorist. This man is a soldier in the war against the infidels. Unfortunately, under the Obama administration, he will be tried in a civilian court.