Unfortunately the Democrat party is very skilled at using the media to destroy Republican candidates who are a threat to Democrats in future elections.  Actually, it’s not much of a challenge, because the media tends to lean left anyway. In the past, Mitt Romney was painted as an uncaring, wealthy snob, although in Massachusetts he was known for his compassion and generous giving to those less fortunate. Sarah Palin never said, “I can see Russia from my back porch.” Tina Fey said that on Saturday Night Live, yet the quote was made to illustrate that Sarah Palin was an idiot, which she is not. The Republicans were accused on waging a ‘war on women,’ when more than one Democrat was accused of sexually harassing or groping his staff. Somehow that was overlooked. Anyway, the list goes on. The latest attempt to take out a Republican before he becomes dangerous is currently going forward in Texas. The tactic that was used to remove Tom DeLay from the political scene is now being used on Rick Perry.

Yesterday John Hinderaker at Power Line reported on the indictment of Rick Perry. He noted that the Travis County district attorney’s office was also the office that indicted Tom Delay. The article notes that it took Tom DeLay years to clear his name, and by that time, his political career was ruined. That is what the Travis County district attorney’s office is attempting to do to Rick Perry.

A grand jury in Travis County, Texas, indicted Governor Rick Perry today. Why? For exercising his constitutional prerogative by threatening to veto, and then vetoing, an appropriation to support the public corruption unit in Travis County’s district attorney’s office. This followed the arrest of the county’s district attorney, Democratic Party activist Rosemary Lehmberg, for drunk driving, after she was found “with an open bottle of vodka in the front passenger seat of her car in a church parking lot in Austin.” Ms. Lehmberg served 45 days in jail.

…Conservatives should respond to this indictment by rallying around Perry. The indictment is a bad joke, intended simply to generate negative publicity. As with the bogus DeLay indictment from the same source, years may go by before it is finally proved baseless. In the meantime, conservatives should stand behind Perry and denounce the politically-motivated machinations of Texas Democrats.

The politics of personal destruction has worked for Democrats in the past. It will continue to work until Republicans learn to recognize it and expose it for what it is. It’s up to conservatives to stop this attack on Rick Perry. It is quite possible that the country-club Republicans will not join us in exposing this as a political attack. Rick Perry has done and is doing a good job in Texas. He does not deserve this sort of nonsense.

One of the recent ideas to come out of the White House is that Republicans want to impeach President Obama. Admittedly, Sarah Palin has made that statement, but the silence from other Republicans is deafening. There’s a reason for that.

Yesterday John Hinderaker at Power Line posted an article with a picture that tells us everything we want to know about impeaching President Obama. 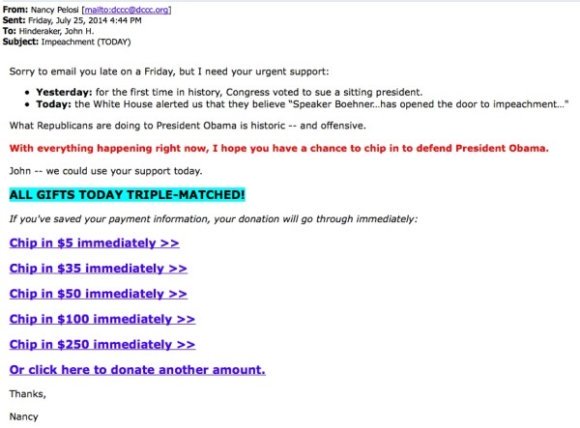 Impeachment talk makes great fundraising. It also distracts people from the domestic and foreign failures of President Obama. The biggest mistake the Republicans could make right now would be to attempt to impeach President Obama. Impeachment is probably the only way the Democrat party can be competitive in the mid-term elections.

One of the problems in America right now is politicians who value their political party more than they value their country. As a result of that values system, statements from the other party that should be heeded are mocked and ignored. We saw this principle in action with Sarah Palin in the 2008 presidential campaign and with Mitt Romney in the 2012 presidential campaign.

Breitbart.com posted an article yesterday reminding us of the events in 2008:

After the Russian Army invaded the nation of Georgia, Senator Obama‘s reaction was one of indecision and moral equivalence, the kind of response that would only encourage Russia’s Putin to invade Ukraine next.

Levin (conservative talk radio host Mark Levin) said her comment was “dismissed as a very strange comment by the eggheads in and out of Washington.” And Levin mocked those who derided Palin for not thinking that “Russia’s our friend… they would never go into Ukraine.” As Breitbart News reported, Blake Hounshell, who was then at Foreign Policy magazine and is now at Politico, wrote that Palin’s comments were “strange.”

Her comments may have been “strange,” but they were obviously 100 percent accurate.

Because she was running on the Republican ticket, Sarah Palin’s comments were ignored and mocked. No one on the Democrat side of things was willing to listen to her.

When Mitt Romney ran against President Obama, something very similar happened. Steven Hayward at Power Line posted the story yesterday (along with the video):

John (John Hinderaker at Power Line) noted before how the Obama campaign attacked Mitt Romney in 2012 for saying Russia was our most important adversary, but it’s also worth taking in Obama mocking Romney in their third debate, saying that “the 1980s want their foreign policy back.”  That’s actually starting to sound pretty good.

I don’t know what difference it would have made if Sarah Palin and Mitt Romney had been listened to, but I can’t help but think that we would have been able to react in some way had we been prepared for the Russian invasion of Ukraine. One analyst I was listening to this morning felt that if America does not do something to help the Ukrainians, Russia will turn its sights to Latvia, Estonia and Lithuania. The world is getting very complicated, and we have a President who is so convinced he knows everything that he is not paying attention to what is going on around him. Putin is playing chess and President Obama is playing checkers. President Obama needs to listen to people on both sides of the aisle–it might avoid some serious mistakes.

America has three branches of government–the Executive, the Legislative, and the Judicial. The idea is to divide the power so that no one branch takes control of the government. There is also the added benefit that each branch protects its own interests by keeping an eye on what the other branches are doing. Thus, we have Congressional hearings when the Executive branch gets a little feisty. The purpose of these hearings is to hold everyone accountable. The process works when everyone is held accountable. The process does not work when information is withheld from Congressional committees and the committees cannot properly do their work.

The article reports the following testimony:

“Most of the 5,000 documents you turned over are emails,” Issa said to Holder. “Mr. Attorney General, I have a question for you. Not one of these emails, in fact, is yours. Aren’t you a prolific emailer?”

Holder responded that, “No,” he is not a “prolific emailer.”

Issa followed up: “Don’t you email?”

“I have an email account at the Justice Department, yes,” Holder equivocated.

If I remember correctly, the press went after former Alaska Governor Sarah Palin for using her personal email account for business when she was governor. Somehow the major press is not noticiing that the Attorney General seems to have done the same thing.

Holder continued to avoid the line of questioning, and said that he’s provided an “unprecedented” amount of documents to Congress. But, he still wouldn’t cite a legal reason why he’s refusing to comply with congressional subpoenas and requests.

“In making production determinations, we have followed what attorneys general in the past have always used — applicable standards, whether these are Republican or Democrat attorneys general,” Holder said. “The information we’ve provided you has been responsive, has been, I think, wholesome and also unprecedented.”

I think this is political-speak for I am not going to willingly give you the information you are looking for–you are going to have to come after it. I hope Committee Chairman Representative Darrell Issa will do just that.

Yesterday Andrew Breitbart’s Big Journalism site posted an article yesterday about the new book about Sarah Palin written by Joe McGinniss. Joe McGinniss was the author who rented a house next to the Palins in Alaska in order to watch them closely for his book. I know that was legal, but it definitely was tacky. Well, it seems that spying on the Palins did not give Mr. McGinniss all the negative stories he was seeking, so he went to some rather unreliable sources.

The article at Big Journalism includes a memo written by Mr. McGinniss to Jesse Griffin, Mr. McGinniss admits that he cannot prove some of the more extreme allegations against the Palins that he related in his book. In the memo, Mr. McGinniss states:

Neither from you, the Enquirer, AlaskaWTF, palingates.com or anyone else, have I seen a credible, identified source backing any of the salacious stories about the Palin family.

Thus–as Random House lawyers are already pointing out to me–nothing I can cite other than my own reporting rises above the level of tawdry gossip. The proof is always just around the corner, but that’s a corner nobody has been able to turn. Maybe Jeff Dunn has, in which case I’ll be the first to congratulate him. But frankly, at this point, I’m tired of it, and I’ve run out of time.

This is ridiculous. I know the goal is to write a book in a timely manner and then sell it, but based on that statement, the book should be sold in the Fiction section of the bookstore.

I am sorry that so much money is wasted on attacking a family just because the wife and mother is a threat to liberal politics. Wouldn’t it be more civil just to discuss issues? I think every American should resent this type of