Newsbusters posted an article today confirming something President Trump has been asserting for quite some time.

President Donald Trump’s strategic silence on Puerto Rico’s earthquakes, while greenlighting billions of dollars in aid and a new major disaster declaration for the stricken U.S. territory, is forcing the liberal media into a most uncomfortable place…acknowledging that he was right all along.

Earlier this week, The Washington Post attempted to redeploy ye olde Hurricane Maria playbook, in order to commoditize human suffering for Democrat political gain. This ham-fisted close to their editorial gave the game away:

Still, it is worth remembering that many Puerto Ricans were forced to leave the island after Maria and are now living — and will be able to vote — in swing states such as Florida and Pennsylvania. Presumably many of them will remember how the island has been treated.

It is important to recall that the national media was asleep at the switch during the initial aftermath of Hurricane Maria –devoting coverage instead to the president’s tweets regarding the NFL. In fact, the liberal media didn’t begin to cover Maria’s terrible aftermath until there was a clear anti-Trump angle as embodied by the radical, separatist mayor of San Juan, who rode her post-Maria notoriety all the way to Bernie Sanders’ presidential campaign — where she now serves as national co-chair.

Additionally, the island was roiled by news that much-needed relief supplies sat in a warehouse as earthquake victims suffered- which only serves to bolster the president’s charge (one with which many Puerto Ricans agree, by the way) that the island’s government is corrupt and incompetent. Per CBS News:

Puerto Rico Governor Wanda Vázquez Garced fired the island’s emergency management director on Saturday, after a video showing aid sitting unused in a warehouse went viral on social media. Some of the aid has allegedly been sitting in the warehouse since Hurricane Maria struck in 2017.

“There are thousands of people who have made sacrifices to help those in the south, and it is unforgivable that resources were kept in the warehouse,” Vázquez said in a statement.

With no obvious anti-Trump angle to chase, the liberal media (with the continued exception of CBS’s David Begnaud) is forced to cover the issue itself, to wit: the earthquakes that have rattled Puerto Rico, and the local government’s continued inability to adequately respond to an emergency due to institutionalized corruption and incompetence. Trump was right after all.

The start of the 2020 Atlantic hurricane season is four and a half months away.

This is typical of countries where corruption reigns–many of the famine problems around the world have more to do with the distribution of food rather than a shortage of food. Dictators around the world have often used food as a weapon to keep their populations under control. In this case, the corruption in Puerto Rico was such that the aid never reached the people who needed it–it remained in warehouses. Meanwhile, the Mayor of San Juan has moved forward to work on the Bernie Sanders campaign.

During the hearings for Justice Kavanaugh, there were charges that he was too political or too biased in one direction. The implication was that Supreme Court Judges should not be political. That is a reasonable standard, but is it applied evenly?

On Thursday, Newsbusters posted an article that included the following:

Despite acknowledging that she should not do so, on her current book tour United States Supreme Court Justice Sonia Sotomayor nevertheless waded into politicking, bashing both the Federal Government’s response to Hurricane María in Puerto Rico and exhorting Latino voters to go to the polls “to change this life for us Latinos.”

…That same evening on Univision’s national evening newscast, Sotomayor was featured bashing the Federal Government’s massive response to Hurricane María in Puerto Rico. She even prefaced her criticism that “help…is not being received” by acknowledging she was wading into political matters.

…Evidently for Sotomayor, the fact that following Hurricane María Puerto Rico was the object of the largest disaster commodity federal response and the largest generator installation mission in U.S. history was not enough, nor was the fact that the U.S. Department of Housing and Urban Development alone has allocated to Puerto Rico $20 billion in Community Development Block Grants, a figure more than twice the size of the U.S. Caribbean territory’s annual budget for its entire government.

At least Sotomayor was wise enough, during her interview with Univision, to remain diplomatic about fellow Associate Justice Brett Kavanaugh’s recent arrival to the Court, saying that “Among colleagues there is always a welcome. He is a new member of our Court. We have to work with him and now we are beginning our new family. We work together, so let’s let this time pass.”

The problem in Puerto Rico was not the amount of aid–it was the corruption involved in distributing the aid.

FBI agents raided municipal offices in San Juan, Puerto Rico, on Tuesday, seizing documents and digital records as part of an investigation into fraud allegations related to the city government.

Special agent in charge Douglas Leff said federal investigators are also looking into potential obstruction of the investigation. According to Leff, agents believe documents tied to the reported irregularities in the city’s purchasing procedures might have been taken from the building or falsified.

If Justice Sotomayor is going to get involved in politics, she should at least do us the courtesy of getting her facts right. The problem is not the Trump administration–it is the corruption in Puerto Rico.

The Conservative Treehouse posted a story today about the crisis in Puerto Rico following hurricane Maria. The mainstream media is making all sorts of charges against President Trump’s handling of the relief effort. Well, it seems that there is a little more to the story.

…They have the generators, water, food, medicine, and fuel on the ground, yet the supplies are not moving across the island as quickly as they’re needed.

“It’s a lack of drivers for the transport trucks, the 18 wheelers. Supplies we have. Trucks we have. There are ships full of supplies, backed up in the ports, waiting to have a vehicle to unload into. However, only 20% of the truck drivers show up to work. These are private citizens in Puerto Rico, paid by companies that are contracted by the government”.. (link)

The ports are so full of relief supplies they can’t fit any more on the available space.

This is a report posted on Twitter from someone who is there: 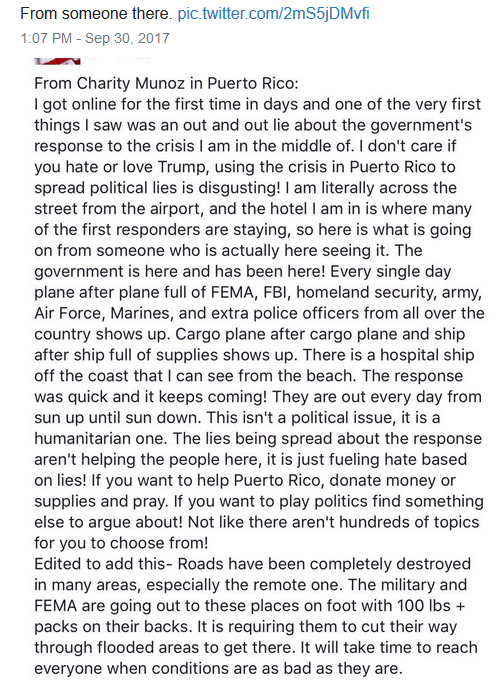 There is nothing that President Trump could do in any situation that would make the media report on him favorably. I wonder if they are even aware of what is actually happening in Puerto Rico.  It’s just a shame that the union drivers won’t help in the effort to help Puerto Rico recover from this massive hurricane.