On Monday, Hot Air posted an article about the quality of life in Portland, Oregon.

I know you’ll be shocked to hear this but voters in the city which saw a string of nightly riots, beatings and even a murder by an Antifa mob over the past 18 months feels quality of life is on the decline. An annual survey of registered voters in Portland and the surrounding area funded by the Portland Business Alliance found 88% of respondents felt that way. The poll also included a right-track, wrong-track question which found that nearly 3/4 of respondents in Portland felt the city was going in the wrong direction.

Maybe the voters need to ask themselves who voted for the current leadership of Portland. However, it does seem as if the voters have learned their lesson.

In other words, even in the city of Portland, voters have rejected “defund the police.” It never made sense that it was necessary to cut police funding in order to fund other priorities. The activist left has now lost this argument in the city that was probably most prone to agree with it.

Finally, it looks like voters haven’t forgotten who was pushing those issues. City Councilwoman Jo Ann Hardesty who has been the loudest proponent of defunding the police is going to be facing a tough reelection. Just 18% of respondents support her while 54% say they are ready to vote for someone else. 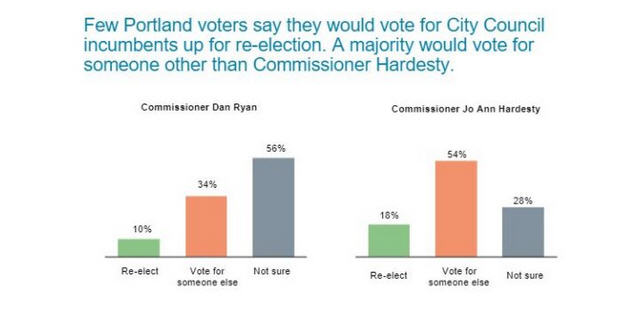 I think all Americans have learned in the recent past that elections have consequences.