MyWay News reported yesterday that Palestinian President Mahmoud Abbas is seeking Palestinian admission to the International Criminal Court. The intention is for Palestine to charge Israel with war crimes.

Abbas made the announcement in the West Bank on Wednesday, a day after the U.N. Security Council failed to pass a resolution that had aimed to set a deadline for Israel to end its occupation of territories sought by the Palestinians.

Abbas had warned that if the resolution failed, he would resume a Palestinian campaign to join international organizations to put pressure on Israel.

Abbas’ decision is expected to trigger a harsh response from Israel.

Israel says all disputes should be resolved through peace talks, and such actions are aimed at bypassing negotiations.

This is a very interesting move.

This is a chart showing rocket attacks on Israel from the Gaza Strip since 2001. It is from the Israeli Defense Forces blog: 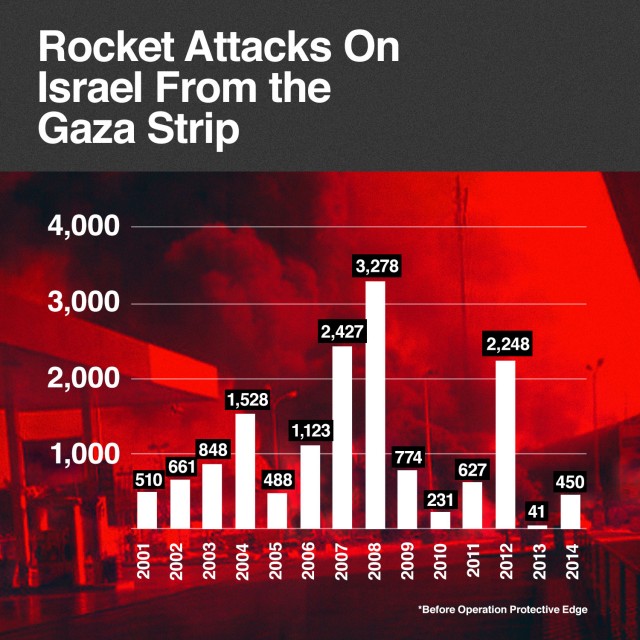 The fact that the originators of these rocket attacks on civilian targets want to charge Israel with war crimes would be laughable except that the International Criminal Court is so anti-Semitic the charges would probably be taken seriously.

As the Palestinians seek to charge Israel with war crimes, we might also remember the tunnels discovered in their recent war with Israel. In July 2014, I reported (rightwinggranny.com) that the Palestinians plan to use the tunnels to hide until schools and kindergartens were occupied. The terrorists would then attempt to kill the children first, and then kill and kidnap as many Israelis as possible.  This plot was set to take place during Jewish New Year, on September 24.

Israel is not the one who should be charged with war crimes.

The General Assembly today voted to grant Palestine non-member observer State status at the United Nations, while expressing the urgent need for the resumption of negotiations between Israel and the Palestinians leading to a permanent two-State solution.

The resolution on the status of Palestine in the UN was adopted by a vote of 138 in favour to nine against with 41 abstentions by the 193-member Assembly.

“We did not come here seeking to delegitimize a State established years ago, and that is Israel; rather we came to affirm the legitimacy of the State that must now achieve its independence, and that is Palestine,” the President of the Palestinian Authority, Mahmoud Abbas, told the Assembly before the vote.

Mr. Abbas noted that the world was being asked today to undertake a significant step in the process of rectifying the “unprecedented historical injustice” inflicted on the Palestinian people since 1948.

This statement works only if you don’t know your history.  In 1919 a formal agreement was signed in London regarding the Jewish homeland. The agreement was signed by His Royal Highness the Emir Feisal ibn-Hussein, representing and acting on behalf of the Arab Kingdom of Hedjaz, and Chaim Weitzman, representing and acting on behalf of the Zionist Organization. A Jewish state was to be established as soon as Jewish immigration and development was sufficient in the wilderness known as Palestine. The boundaries of the nation were codified and approved unanimously by the League of Nations. The land included in this agreement included what is now Jordan and much of the land won back by Israel in the 1967 war.  In 1921, 75 percent of the land given to Israel was taken away from her by the British and given to Abdullah, the brother of Feisal ibn-Hussein. Abdulah was a Hashemite. The Hashemite tribe had just been driven out of Mecca and Medina by the Wahabi Muslims, so the Hasemites took over what was to be the Palestinian homeland (Jordan). So as you can see, the historical injustice against the Palestinians took place in 1921 and was perpetrated by the Wahabi Muslims–not the Jews. But facts are so inconvenient.

Israel responded to the vote:

Israel’s Ambassador to the UN, Ron Prosor, said his delegation could not accept today’s resolution. “Because this resolution is so one-sided, it doesn’t advance peace, it pushes it backwards,” he stated, adding that peace could only be achieved through negotiations.

“There’s only one route to Palestinian statehood and that route does not run through this chamber in New York. That route runs through direct negotiations between Jerusalem and Ramallah that will lead to a secure and lasting peace between Israelis and Palestinians,” he added. “There are no shortcuts. No quick fixes. No instant solutions.”

As I have said before, until the Palestinians begin to build the infrastructure of an ordered society and stop teaching their children to hate, they should not be given a state. Creating a Palestinian state in its current form would simply be creating a base for terrorism against Israel.