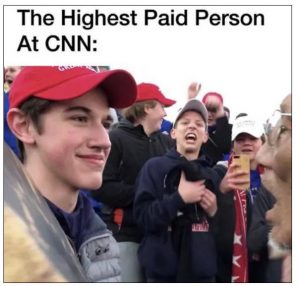 Yesterday Ed Morrissey posted an article at Hot Air about the latest chapter in the saga of Nick Sandmann and the settlements reached with CNN and The Washington Post.

Big mistake, Sandmann attorney Lin Wood made clear almost immediately. “I know how to deal with liars,” Wood tweeted, and warned that new lawsuits would be filed unless “heads rolled” at both outlets:

…This started with speculation that Sandmann had indeed gotten paid nothing more than “nuisance value.” Law & Crime wrote a pretty comprehensive overview of the social-media discussion of that premise after some attorneys unconnected to the case tried to read the tea leaves from various announcements in both cases. It’s worth reading, at least for the legal theories behind the speculation. That included a rather anodyne statement from Wood expressing his opinion that the speculation was “uninformed, errant nonsense,” but added that “questions about confidentiality and the timing of the settlement will have to be directed to others.” Wood didn’t threaten anyone over the speculation — because they were not party to the confidentiality agreement, and neither was Law & Crime.

That isn’t the case with Stelter, Rangappa, and Zak. They work for the respondents in these lawsuits and act as their agents. As soon as they published and expanded on the speculation, they characterized the settlement in terms their employer specifically agreed not to do. Not only does that open up new avenues for Sandmann against the Post and CNN, it might allow Wood to add the three as respondents in a new libel/defamation action.

This may seem like a minor thing, but it is important that both parties act in accordance with the agreement they signed. I can understand why CNN and The Washington Post would want people to think that the settlement was small–they want to discourage future lawsuits. I can understand why Lin Wood would want to give the impression of a large settlement–it might discourage future character assassination of innocent people by the media.

Stay tuned. There may be more coming.

Yesterday Julie Kelly at  American Greatness reported that Lin Wood, the attorney who represented Nick Sandmann and the other Covington High School students in their defamation lawsuits against various media outlets, has been hired by Carter Page.

On Sunday, Wood confirmed he will represent another innocent person maligned and defamed by the American news media: Carter Page, the Trump campaign associate who James Comey’s FBI accused of acting as an agent of Russia.

Page was the target of four Foreign Intelligence Surveillance Act warrants. The most powerful, invasive government tools—usually reserved for suspected foreign terrorists—were unleashed against Page as a way to infiltrate and spy on Team Trump.

But the FISAs were only part of Page’s personal hell. Tipped off by Democratic operatives as a way to seed the concocted Trump-Russia collusion hoax before the presidential election, journalists started harassing Page in the summer of 2016.

His first call, Page told me in 2018, was from a Wall Street Journal reporter hounding Page about an alleged meeting with a “senior Kremlin official” and the existence of compromising material that Russia allegedly had on Trump and Hillary Clinton. (Fusion GPS chief Glenn Simpson was a Journal reporter for years.)

In an interview with Page in 2018, he told me that his real nightmare began in September 2016 after Michael Isikoff, a veteran political journalist and writer for Yahoo News, reported that Page was under federal investigation for his ties to the Kremlin.

“U.S. intelligence officials are seeking to determine whether an American businessman identified by Donald Trump as one of his foreign policy advisers has opened up private communications with senior Russian officials—including talks about the possible lifting of economic sanctions if the Republican nominee becomes president,” Isikoff disclosed on September 23, 2016. “The activities of Trump adviser Carter Page, who has extensive business interests in Russia, have been discussed with senior members of Congress during recent briefings about suspected efforts by Moscow to influence the presidential election.”

The article includes a tweet from Lin Wood which lists the targets of the lawsuits he is planning. Please follow the link to the article to see a list of targets the author of the article thinks should be added to the current list.

Yesterday Power Line Blog posted an article about Nick Sandmann and his lawsuit against CNN.

Nick Sandmann is an innocent kid who was waiting for a bus with a group of his fellow high school students in Washington, D.C., when he was accosted by an Indian activist who, accompanied by a gang of his followers, aggressively and obnoxiously beat a drum in his face. Sandmann committed the apparently unpardonable sin of standing still in the face of this activist onslaught, which caused him to be viciously smeared by media outlets like CNN and the Washington Post. Happily, Sandmann’s family retained a good lawyer and has sued several of the media outlets that lied about him.

Now the first domino has fallen: CNN has settled Sandmann’s case against it:

The amount of the settlement was not made public during a hearing at the federal courthouse in Covington, Kentucky.

The amount of the settlement has not been disclosed, which is evidently not unusual in this type of court case.

In this instance, I am pretty sure that it was CNN, one of the main malefactors, that didn’t want the world to know how much it paid Sandmann as a result of its pathetically biased reporting. Now Sandmann’s lawyers can use CNN’s contribution, likely in the mid six figures, to fund their ongoing battle against the Washington Post, NBC and any others who slandered the boy. That is how the system works, and in this case, it appears to be working for the good.

This may actually be the only way to deal with fake news.