Investor’s Business Daily posted an article on Friday about the growth of regulations under the Obama Administration. 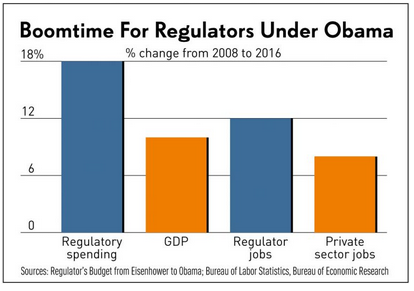 The growth of regulations under President Obama has been astounding.

Total spending on federal regulatory activity has jumped almost 18% in real terms since Obama took office, reaching $56 billion this year. That outpaced overall economic growth, which has climbed a total of 13% since 2008.

Over those same years, the number of jobs at these regulatory agencies climbed by 11.8% — to almost 280,000 workers — while the number of private sector jobs has growth by 8.5%.

To put these numbers in perspective: If GDP had grown as fast as the federal regulatory budget, the economy would be $696 billion bigger today. If private sector employment had kept pace with the growth in regulatory jobs, there would be 3.7 million more people at work.

The study, published jointly by the Weidenbaum Center at Washington University in St. Louis and the Regulatory Studies Center at George Washington University, also breaks down regulatory spending into “social” and “economic” categories. Social regulations cover health, safety and environment, and include agencies such as the FDA, Homeland Security, the EPA, the National Highway Traffic Safety Administration.

The thing to remember here is that regulations cost money. They are an extra burden on small businesses and slow down the growth of the economy.

Based on the administration’s own figures, these Obama-imposed rules cost the economy a total of $108 billion a year, but as Heritage notes, the actual costs are much higher because federal regulators routinely lowball compliance costs.

This is no way to run an economy.

There are at least 59 potential class-action lawsuits in the works seeking economic loss damages, but to get them, they will have to unwind the liability shield somehow.

The court proceedings mark the sixth ongoing probe of GM, following investigations launched by Congress, an undisclosed state attorney general, the U.S. Attorney’s office, the SEC, and the NHTSA. GM also has an internal probe trying to determine who knew or should have known about the problem that has claimed at least 13 lives and cost GM car owners millions of dollars.

There are some real questions about who knew about the ignition problem and when they knew, but the bankruptcy proceedings of General Motors were not your ordinary bankruptcy proceedings from the beginning. Taxpayers lost nearly $10 billion in the bailout (see rightwinggranny.com). The rules of bankruptcy were not followed, and essentially the company was turned over to the unions. Evidently the unions had no more regard for the safety of the average American than did the corporate executives. 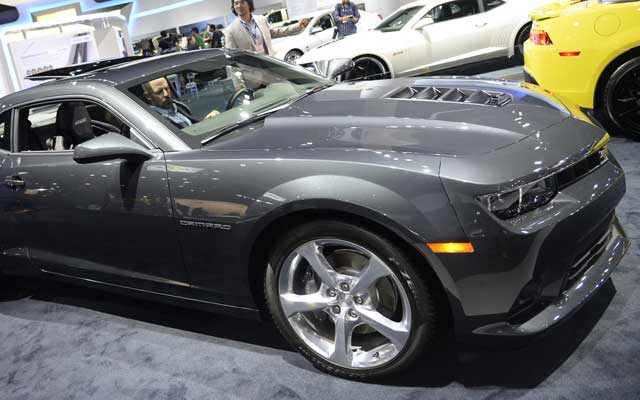 Bypassing Congress, the Obama administration has issued a proposed administrative rule, which if adopted, would mandate the installation of “black boxes” in all automobiles and light trucks beginning in 2014.

The U.S. Department of Transportation’s National Highway Traffic Safety Administration (NHTSA) proposed the regulation on Dec. 7, which it said “would capture valuable safety-related data in the seconds before and during a motor vehicle crash.”

I can understand the value of the event data recorders (EDRs) in case of an accident, but what about the other things they record? According to Horace Cooper of the National Center for Public Policy Analysis,  “EDRs not only provide details necessary for accident investigation, they can also track travel records, passenger usage, cell phone use and other private data — who you visit, what you weigh, how often you call your mother and more is captured by these devices.” Logically, with an EDR, you could determine which people are associating with each other, where they are meeting, and begin to control personal and political activity among Americans. I think this is a really bad idea.