On July 16, 2014, the North Carolina General Assembly ratified SB812 (follow link for full text). The bill charges the State Board of Education with the task of conducting a comprehensive review of all English Language Arts and Mathematics standards adopted under G.S.115C 12(9c) and propose modifications to ensure that those standards will improve the students’ level of academic achievement, meet and reflect North Carolina’s priorities, and other goals. The law sets up the Academic Standards Review Commission composed of eleven people who are charged with reviewing  current standards and making recommendations. Unfortunately the way the law is written, the Commission is simply going through the Common Core standards line by line (by hearing a presentation of the Department of Public Instruction [DPI], which supports Common Core). There is no objectivity in the presentation, and there is no factual information at this point that indicates Common Core does anything to raise academic standards.

In May of last year, I wrote an article about the introduction of Common Core in Massachusetts. The article cited a Wall Street Journal article detailing the changes in Massachusetts education during the 1990’s. Education in the state was reformed in 1993, and SAT scores rose for thirteen consecutive years. In 2005 Massachusetts scored best in the nation in all grades and categories on the National Assessment of Educational Progress. They have repeated that performance every time they have taken the test.  Massachusetts is doing very well educationally right now.

On October 1 of this year, I wrote another article about Common Core in Massachusetts. The article was about the Lincoln-Sudbury School Board‘s decision to decline a chance to offer the PARCC (Common Core) to students next spring, sharply criticizing the standardized test that could end up replacing the MCAS in the state.

That article quotes a Massachusetts newspaper article that states:

One board member equated the trial run of the exam as making “guinea pigs” out of students, whom he said wouldn’t see any worthwhile benefit from the dozens of hours they would put into practicing for and taking the test.

Lincoln-Sudbury, like all public high schools in Massachusetts, had a choice to administer the PARCC, short for Partnership for Assessment of Readiness for College and Careers, in ninth and 11th grade later this year. The new test, which was introduced in a small pilot roll-out this past spring, was developed by a consortium of states to closely conform to the new Common Core standards adopted by most schools in the nation.

…Several committee members also bemoaned the PARCC’s potential effect of putting increased emphasis on standardized testing, arguing Lincoln-Sudbury on its own is able to come up with much more effective measures of students’ grasp of learning standards.

No matter how hard the Department of Public Instruction tries to sell it, Common Core is untested. If the Commission is truly concerned about the education of North Carolina students, they will look to other states that have successfully improved the academic achievement levels of their students. I am sure there are many communities in Massachusetts who would be willing and able to help with this task.

Meanwhile, today’s meeting was a biased, self-serving presentation by the Department of Public Instruction–a department that was not interested in changing anything (except possibly the name Common Core). That is unfortunate.

If the parents and grandparents of North Carolina students are truly concerned about their students’ education, they need to get involved very quickly. There will be a meeting next month in which the DPI will do a presentation of the mathematics section of Common Core similar to the one they did today on the English Language Arts section. So far there has been no public examination of any set of standards other than the unproven Common Core standards. If that continues, the students of North Carolina will be the victims of an exercise in futility that accomplished nothing.

Last night I attended a forum on Common Core at the Worcester Public Library. The forum was sponsored by the Back to Basics Caucus, a coalition of school committee members from across Massachusetts. The speakers were Sandra Stotsky, an ELA Curriculum Author, and Ted Rebarber, a Costs and Accountability Expert.

Common Core is a controversial initiative to align curriculum standards among all 50 states. It is being attacked from both the left and the right for many reasons, but mainly because it is seen as a top down Federal takeover of state and local education programs. It is a “one size fits all” curriculum.

Yesterday’s Wall Street Journal posted an article by James Gass and Charles Chieppo (I have not linked to the article because it is subscribers only) entitled, “Common Core Education Is Uncommonly Inadequate.” The story they tell hits very close to home–it’s about Massachusetts, where I live and sent my children to school.

The article in the Wall Street Journal cites the changes in Massachusetts education during the 1990’s. Education in the state was reformed in 1993, and SAT scores rose for thirteen consecutive years. In 2005 Massachusetts scored best in the nation in all grades and categories on the National Assessment of Educational Progress. They have repeated that performance every time they have taken the test.  Massachusetts is doing very well educationally right now.

In 2010 Massachusetts joined Common Core, which is supposed to be fully implemented by Spring of 2014. Common Core has some serious problems–scholastically and legally.

…Three federal laws explicitly prohibit the U.S. government from directing, supervising or controlling any nationalized standards, testing or curriculum. Yet Race to the Top, a federal education grant competition that dangled $4.35 billion in front of states, favored applications that adopted Common Core. The Education Department subsequently awarded $362 million to fund two national assessments and a “model curriculum” that is “aligned with” Common Core.

Academically the standards for Common Core are lower than those currently in effect in Massachusetts–so why in the world would we want to change? Therein lies the question.

The Heritage Foundation posts a picture that is worth a thousand words: 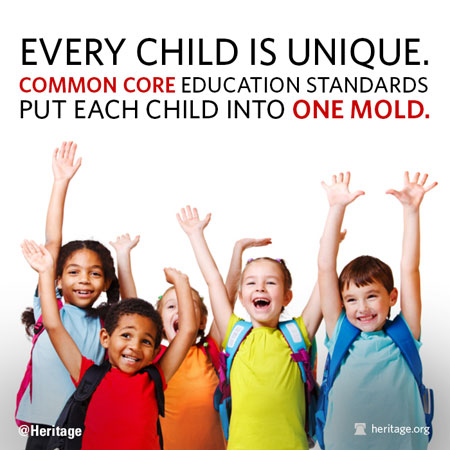 The article at the Heritage Foundation concludes:

Common Core takes the path toward centralization, and state leaders should seize the moment to resist this latest federal overreach. National standards and tests are a challenge to educational freedom in America, and state and local leaders who believe in limited government should resist them.

Common Core was put together without the input of the teachers who educate our children. Some of its backers are the Gates Foundation and the Pearson company.

At the present time there are no reliable cost estimates for the change to Common Core. There is no cost-benefit analysis.