One America News posted an article today about Congressional attempts to extend the Foreign Intelligence Surveillance Act (FISA). Frankly, I don’t think it should be extended until those who abused it in the past are held accountable for their actions. FISA was used (just as the Watergate break-in was attempted to be used) to spy on an opposing political campaign. If the act is extended and no one is held accountable, it is a pretty safe bet that political parties that are in power could do the same thing that the Obama administration did–use the law to spy on the political campaign of their opposition. That is not acceptable. That sort of action puts us on the road to having a two-tiered justice system with the government having almost unlimited authority to spy on Americans.

The Senate voted on a temporary extension of recently lapsed intelligence programs to provide time for discussion on major provisions in the renewal process. The extension was passed Monday, just minutes before a scheduled procedural vote on the matter.

The move came as a way to give lawmakers more time to consider the bill, which would reauthorize the controversial Foreign Intelligence Surveillance Act (FISA). However, the extension for the Senate was unanimously agreed to in order to give members more time to debate on the House’s revisions.

Specifically, there is bipartisan push-back to FISA, which senators on both sides of the aisle fear violates people’s privacy rights. Two of the most vocal opponents to the act are Sen. Rand Paul (R-Ky.) and Mike Lee (R-Utah).

“The secret FISA court should be forbidden from allowing spying on political campaigns ever again, period,” said Sen. Paul. “…History has proven just how dangerous it can be when we sacrifice our rights to create a temporary and ultimately false sense of security.”

Until I see indictments of people who knowingly lied to the FISA court, I don’t want to see FISA renewed.

This post is not directly related to the Senate hearings yesterday, but it may be an indication of the ethics of the people involved.

The Washington Post posted an article yesterday about something that happened to the Republicans on the Senate Judiciary Committee as the hearings were going on.

Several Republicans on the Senate Judiciary Committee had their home addresses and phone numbers released to the public on their Wikipedia pages during Thursday’s hearing on Judge Brett Kavanaugh’s nomination.

According to Caleb Hull, editor of the Independent Journal Review, the wife of Mr. Hatch “has been receiving calls nonstop ON HER BIRTHDAY and their home address was made public.”

The article explains what happened:

CongressEdits, a bot account that for four years automatically retweets edits to Wikipedia made anonymously from IP addresses associated with the U.S. Congress, said the information was also posted on Mr. Lee and Mr. Graham “from US House of Representatives.”

The article auto-posted screen shots supporting the edits being made and noting the inclusion of private information, a practice known as “doxxing.”

The private information on the Republican Senators is coming from a computer from the House of Representatives!

Congress reporter for Politico Burgess Everett tweeted: “Someone is doxxing GOP senators on a computer from the House of Representatives, began shortly after the Graham speech. I’m not going to retweet the account where this is posted.”

The person who leaked this information needs to go to jail. He has put members of Congress at risk.

This is a new low in American politics, and one has to wonder what it is about. What is the threat that confirming Judge Kavanaugh represeents? Why are the Democrats willing to go to such lengths to block him?

I suspect that if Judge Kavanaugh is confirmed, we will know the answers to those questions fairly quickly. We have watched the Advise and Consent process turned on its head. A strategy that failed with Anita Hill was retried. Hopefully it will fail again. The politics of personal destruction should not be a part of the confirmation process–particularly when an allegation is not able to be proved. If you are going to make a charge that has the potential of ruining a man’s career, come with evidence.

The Daily Signal posted an article today about President Obama’s latest Executive Order. The President claims that the order will bar federal contractors from practicing “discrimination” on the basis of sexual orientation and gender identity. That sounds good, but there are some problems with it.

Today’s executive order does not contain any religious liberty protections—though it does retain an older federal regulation that permits religious organizations that favor employment of co-religionists to continue such practices. But there is no protection for organizations that hire based on mission—not on affiliation—to continue to do so. This in effect excludes taxpayers who hold conscientious beliefs about sexuality that run counter to Obama’s from being eligible for federal contracts funded with their own tax dollars.

The article also explains the solution for this Executive Order:

In response to this executive order, Congress has an opportunity to protect religious liberty and the rights of conscience. Policy should prohibit the government from discriminating against any individual or group, whether nonprofit or for-profit, based on their beliefs that marriage is the union of a man and woman or that sexual relations are reserved for marriage. The government should be prohibited from discriminating against such groups or individuals in tax policy, employment, licensing, accreditation, or contracting.

The Marriage and Religious Freedom Act—sponsored by Rep. Raul Labrador, R-Idaho, in the House (H.R. 3133) with more than 100 co-sponsors of both parties and sponsored by Sen. Mike Lee, R – Utah, in the Senate (S. 1808) with 17 co-sponsors—would prevent the federal government from taking such adverse actions. Protecting religious liberty and the rights of conscience fosters a more diverse civil sphere. Indeed, tolerance is essential to promoting peaceful coexistence even amid disagreement.

We have always had transgendered people with us. They should be treated with respect. However, people with religious convictions should also be treated with respect. The right of conscience has always been a part of American law–from abortion law to gender issues. The Executive Order President Obama signed today is an affront to the freedom of all Americans–it does not respect their First Amendment right to practice and live according to their religious beliefs. Someone needs to read the U.S. Constitution to all of the people in Washington .

Integrity should not be a partisan issue, but unfortunately in the Eric Holder Justice Department it is. Yesterday’s Washington Times reported that the Justice Department has blocked a full investigation concerning corruption charges against Senate Democrat Harry Reid and Senate Republican Mike Lee.

The probe, conducted by one Republican and one Democratic state prosecutor in Utah, has received accusations from an indicted businessman and political donor, interviewed other witnesses and gathered preliminary evidence such as financial records, Congressional Record statements and photographs that corroborate some aspects of the accusations, officials have told The Washington Times and ABC News.

But the Justice Department’s public integrity section — which normally handles corruption cases involving elected figures — rejected FBI agents’ bid to use a federal grand jury and subpoenas to determine whether the accusations are true and whether any federal crimes were committed by state and federal officials.

Please follow the link to the article to see the details of the charges and the lack of cooperation from the Justice Department.

It does neither political party good to have corrupt people remain in office and not be held accountable for their misdeeds. It would behoove the Justice Department to move forward with both of these investigations and either convict or clear the air.

Today’s Weekly Standard posted an article about the recent indictment of author and filmmaker Dinesh D’Souza. There is some real question as to whether or not Mr. D’Souza is under indictment because of his open criticism of President Obama and President Obama’s policies. Senators Charles Grassley, ranking member of the Judiciary Committee, Jeff Sessions, Ted Cruz, and Mike Lee have written a letter to FBI director James Comey asking questions about the indictment. 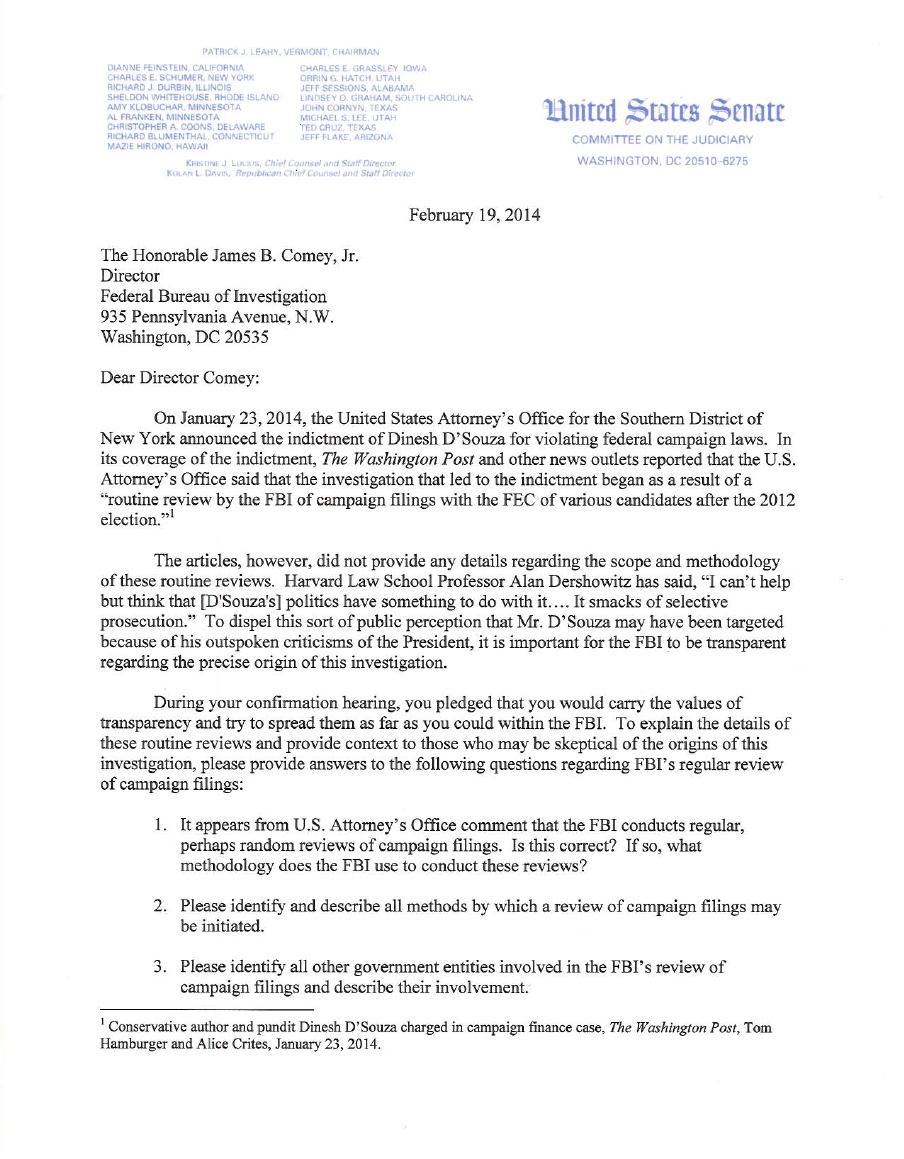 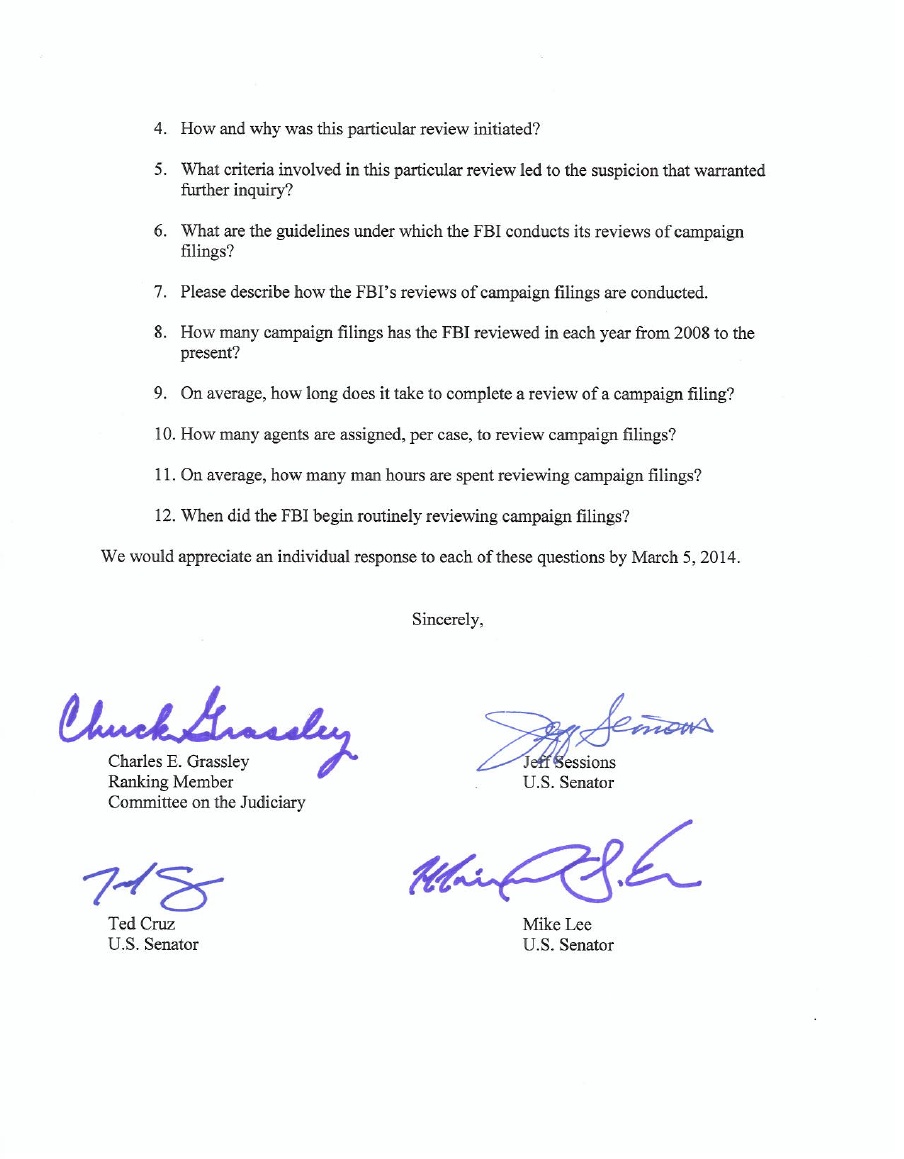 These are questions that need to be answered. The Obama Administration has shown a very uneven hand in its administration of justice. The New Black Panthers were never prosecuted for voter intimidation, and the only person who was ever arrested in relation to Benghazi was the filmmaker who had nothing to do with the incident. This Justice Department has not upheld its duty of administrating justice equally.

The article cites some examples:

Sen. Marco Rubio of Florida won’t take sides in GOP incumbent primaries because of his own experience of running against the establishment’s pick. Neither will Sen. Mike Lee of Utah, who rode tea-party support to take down a three-term incumbent. Sens. Rand Paul of Kentucky and Ted Cruz of Texas are also unlikely to back any of the conservatives taking on Republican senators; in fact, Paul is committing heresy in the eyes of tea-party hard-liners by endorsing two Washington insiders, Kentucky Sen. Mitch McConnell and Wyoming Sen. Michael Enzi.

This show of decorum from senators who instigated the unpopular government shutdown is striking at a time of mounting friction between the establishment and tea-party wings of the Republican Party. So what’s behind it? The upshot of the tea-party caucus’s largely staying on the sidelines—and, in Paul’s case, endorsing two of his colleagues—is that of all the protocols the conservative insurgency has trashed on Capitol Hill, a member endorsing a colleague’s opponent remains strictly taboo.

Note to Republicans–it’s not a club–it’s a government, and right now it isn’t working very well.