Townhall posted an article today which illustrates how some media outlets skew their reporting in order to advance a political agenda.

The article notes a change in a CNN headline about the Democrats’ blocking of a bill to add more funding for paycheck protection for small businesses. 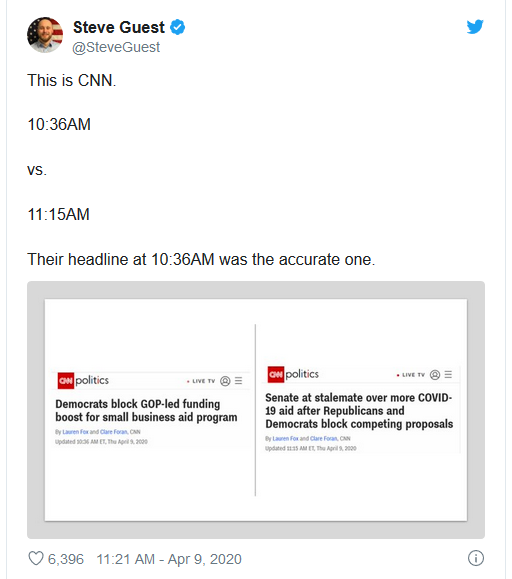 This misrepresentation is not only inaccurate, but also dangerous for Americans seeking information. The American people deserve to know which lawmakers put aside ideology in order to alleviate economic distress, and which party chose partisanship over relief for small businesses during a global health pandemic. Despite CNN’s virtue signaling in defense of Democrats, the delay of additional funding for the Paycheck Protection Program is at the hands of Senate Democrats, and Americans will suffer because of their delay.

I have very mixed emotions about the amount of money we are spending. The only silver lining here is that at least the money is aimed at businesses who need it–not destined to be lost in corporate kickbacks to Congress or subsides to companies that are not able to stand on their own such as Solyndra.

Yesterday The Gateway Pundit posted an article about a letter sent from a group of Republican Congressmen to Adam Schiff. It seems that when the Democrats put together their rules for impeachment, they forgot to cross out a portion of those rules that they did not plan to include.

In his letter Rep. McCarthy cites House Rule XI, Cause 2(j)(1) The Minority Rule on calling witnesses. This rule allows the Minority to call any witnesses they want on at least one day of a congressional hearing, upon notifying the Committee chairman, which the Republicans did this morning.

…Pelosi and her Lawfare crew of condescending coup criminals overlooked the rule and didn’t change or strike it when they changed the other House rules for impeachment!

This is the rule:

The Minority Witness Rule (Clause 2(j)(1) of Rule XI) – The Minority is entitled to one additional day of related hearings at which to call their own witnesses if a majority of the Minority Members make their demand before the committee�s hearing is gaveled closed.

Yesterday the Daily Caller posted an article about a recent statement by the Environmental Protection Agency (EPA) Administrator Gina McCarthy.

McCarthy is referring to the EPA’s proposed rule that would limit carbon dioxide emissions from existing power plants. The agency says the rule will not only help fight global warming, but will also improve public health as coal-fired power plants are shuttered. McCarthy, however, put special emphasis on how the rule would reduce asthma rates, which affect African-American children.

Rush Limbaugh said once that if the world were going to end tomorrow, the New York Times headline would be, “World Ends Tomorrow–Women And Children Most Effected.”

If we have any doubt that the climate-control movement was the new home of the communists and socialists, the above statement by Ms. McCarthy should remove all doubt.

“Green For All acknowledges the need to disrupt the current economy, because we understand that our current economy was based upon human trafficking, the exploitation of labor, and violent racism,” according to the group’s website. “We are safe enough to be invited into spaces where power-building groups are not, and radical enough to push a deeply justice-based agenda in those spaces. We are radical enough to partner with grassroots organizations when other national groups are turned away, and enough of an ally to offer resources and support in those spaces.”

The article reminds us that the disruption in the economy would hit the very people the movement claims to be helping the hardest. The higher energy costs would impact small businesses, causing people to lose their jobs. Lower paid and unskilled workers would be impacted. Low income people would be devastated by higher energy costs.

Wealth redistribution never accomplishes anything good. It simply makes more people poor. It also allows certain people who are in control to be immune from having their wealth redistributed. Generally speaking, it is a really bad idea. Socialist and communist countries have a much lower standard of living than countries where people are free and have property rights. To move in the direction of socialism or communism is to move toward poverty–not toward economic equality or freedom.

The Blaze is reporting today that another government agency has lost certain emails that Congress is seeking. There seems to be an epidemic of ‘the dog ate my homework’ in Washington. The epidemic needs to stop–NOW!

EPA Administrator Gina McCarthy told Rep. Mark Meadows (R-N.C.) that the EPA is still wrestling with how to recover emails from a former EPA official based in Alaska, who was involved in decision to block a proposed mining operation. Meadows pressed McCarthy on how progress was coming along, and McCarthy admitted there are problems.

“I don’t believe this is a missing hard drive issue. There’s a challenge getting access to the data,” she said. ”We’re increasingly getting information in different ways and we’re taking a look at it.”

McCarthy never attributed it to a computer crash, like the IRS did in the case of Lois Lerner. Instead, she said it’s a problem that involves multiple failures.

…When Meadows asked if the EPA has told the National Archives, McCarthy said the EPA did take that step.

When did America become a banana republic? Where is the accountability? Is Congress even aware that they are being totally dissed and their oversight committees mocked? This has got to stop.

I will not attempt to highlight or summarize the article by Andrew McCarthy at National Review. I know it is a long article, but please follow the link and read the entire article. It is worth it. Mr. McCarthy is one of the few people in our country that truly understands terrorism and how it works. He knows what he is talking about.