On Friday, PJ Media reported that a Volkswagen Jetta with a bumper sticker depicting Trump as Hitler crashed through the store window of a Lets Go Brandon shop in Easton, Massachusetts. There have been a number of Lets Go Brandon shops opened up in Massachusetts in Bellingham, Easton, Hanson, Somerset, and North Attleboro. I recently visited the one in North Attleboro, which is located in a building that was formerly a florist shop.

The store window was full of Trump flags. The car damaged or destroyed racks and tables of t-shirts, hats, and various forms of Trump plunder, but missed the one person who was nearby.

The police are still investigating the “accident” and no charges have been announced against the driver, a 46-year-old man from the nearby town of Raynham. He was taken to the hospital with non-life-threatening injuries. No one else was hurt.

In a twist of suh-weet irony, the car also had a sticker with a quote by French author Voltaire: “Those who can make you believe absurdities, can make you commit atrocities.”

I hope this was an accident. I fear it was not.

This is the video of the incident:

Sometimes I am really glad that I drive an old car. Some of the technology in newer cars is getting scary. It is no comfort to me that an insurance company can put a device in your car to monitor whether or not you are a safe driver. There are also other electronics that can be added to your car with questionable capabilities. I am posting the following article not knowing if it is true or possible. However, it does provide some insight as to where we might be headed.

As a result of this protest in Canada truckers in the United States have followed suit and have assembled a trucker’s convoy in Washington DC.

And it looks like some of the corporate heads are showing their true colors in the United States just like they did with Canada.

It’s being reported by at least one trucker that the Penske Corporation remotely shutdown a trucker’s vehicle because they do not support this sort of protest.

A Burkburnett man taking part in a national truck convoy protest found himself without a ride Friday.

Jeff Sandberg has been vocal in his support of the convoy on social media and was driving a rig bearing a banner covered in slogans.

“We’re just trying to show what the people who back us believe — and our own beliefs — of what our country needs to go back to,” Sandberg told the New York Times Wednesday.

By Thursday night, Sandberg was sidelined because the company he rented his truck from, Penske, shut down his truck remotely.

“Penske does not support the people’s convoy movement,” Sandberg said on a Facebook stream. “So, I’m in a situation where I’m not going to be able to continue on.”

There are some questions surrounding this story, however:

Penske said that they didn’t cut the power to the truck, but instead they pulled him as one of their drivers because he had a “Let’s Go Brandon” banner on his truck.

According to one man, that’s not the truth because he has a good friend who is higher up in the company and relayed that information, but I guess we can’t truly know for sure.

On Monday, The Daily Wire posted an article about some recent decisions in the National Association for Stock Car Auto Racing (NASCAR). As I am sure you remember, the slogan “Lets go, Brandon” began at a NASCAR race when an NBC announcer misheard what the crowd was chanting. Well, the race car driver the chant was supposedly for was Brandon Brown, who recently was having trouble finding sponsors because the chant has gone viral and is not universally appreciated. Well, Mr. Brown’s decided to make lemonade out of the lemons he was handed and has formed the LGBcoin racing team. NASCAR initially approved the sponsorship, but seems to be having second thoughts.

“According to Max Marcucci, a spokesperson for Brown’s team, NASCAR gave the team written approval on the sponsorship and paint scheme late last year and said the team went through the usual sponsorship approval process,” CNN reported. “Marcucci said NASCAR called following the announcement and acknowledged to the team that it had received approval and ‘apologized for any confusion and miscommunication,’ but said that the deal “needs to be reviewed at a higher level.”

In a statement provided by Marcucci, Brandonbilt Motorsports received approval on the sponsors from a NASCAR Racing Operations official on Dec. 26.

According to the statement, the approval of the partnership was “unambiguous” as an opening portion of the email from the official said “The sponsors are approved…”

The statement acknowledged that the NASCAR official offered feedback on a minor graphic design change “to ensure legibility on the track at 170mph.”

“We will continue to work with NASCAR and look forward to resolving this matter and clearing the air as soon as possible,” the statement read.

NASCAR fans tend to be conservative. NACAR is running the risk of turning off its fans just as the NFL and NBA have in recent years. It would be better to let the team continue and let the chips fall where they may.

From my friends at Townhall: 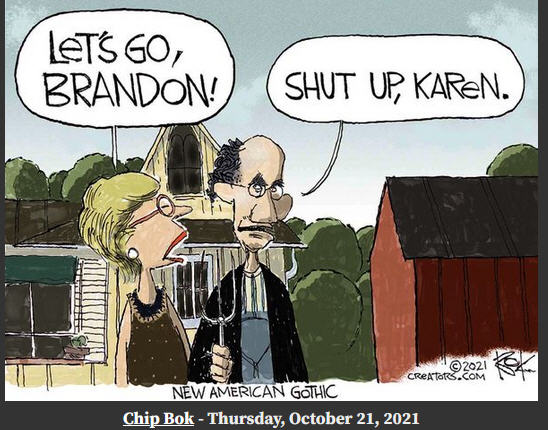