I wondered what was going on when I heard that Nancy Pelosi was going to take a vote in the House on impeachment. That doesn’t make sense–it forces Representatives in swing districts to go on the record on an issue their constituents do not support. It would also allow the President to call witnesses and to cross examine witnesses. Yesterday The Conservative Treehouse posted an article explaining what is going on. I strongly suggest that you follow the link and read the entire article–it is complicated and includes a lot of lawyer concepts.

On Thursday of this week Speaker Pelosi is bringing to the floor a resolution to affirm her previous declaration of an “Official House Inquiry”.  Mrs. Pelosi is very purposefully and carefully telling reporters this is not a “House resolution on impeachment”. 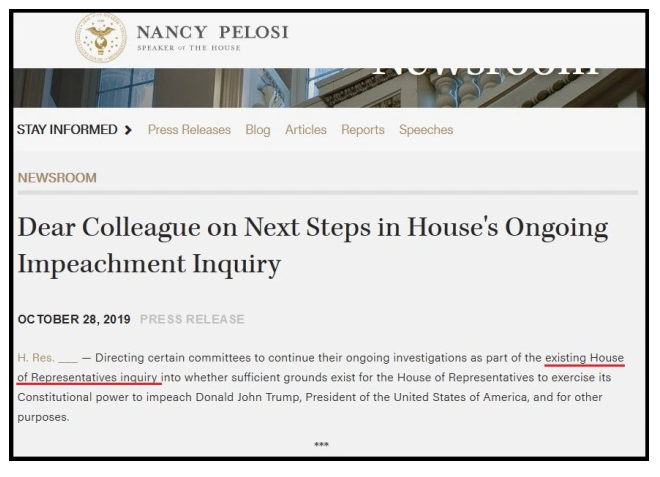 Speaker Pelosi is holding a vote, a resolution, to affirm her previous declaration of a House “inquiry”.  The resolution is currently being written by Lawfare. Pelosi is not delivering a House “Resolution on Impeachment” for a vote, because if she did hold a vote on an impeachment resolution, the minority and the Executive branch would gain rights therein.

This is a House vote to show support for Pelosi’s previous unilateral decree.   Right now the rules committee is adding language to the resolution that will provide additional one-sided support for a completely partisan process: “and for other purposes”.

Note in this video, Pelosi is careful to say “this is not an impeachment resolution”:

…It is not an “impeachment resolution”, it is a resolution to support the already existing “impeachment inquiry”. Pelosi and the Lawfare crew are playing games.

This is the money quote:

It’s all smoke and  mirrors, folks.

While the United States Constitution‘s First Amendment identifies the rights to assemble and to petition the government, the text of the First Amendment does not make specific mention of a right to association. Nevertheless, the United States Supreme Court held in NAACP v. Alabama that the freedom of association is an essential part of the Freedom of Speech because, in many cases, people can engage in effective speech only when they join with others

It is not too much of a stretch to say that this includes the right of a business to do business (or not do business) with whomever they choose (excluding national security issues and things like that). Is that still true in America?

Yesterday PJ Media posted an article about a recent poll of students at the University of Wisconsin-Madison regarding the rights of people engaged in business.

Students told ADF (Alliance Defending Freedom) that it was okay for a dress designer to turn down Melania Trump for political reasons. “You should be able to control your business in that regard, yeah,” one young man said. “I mean, it’s a free market, that’s what most conservatives want anyway,” another student chimed in. When asked if the dress designer has the right to do that, a young woman replied, “Absolutely.”

ADF also asked students what should happen if a church approached a Muslim singer for an Easter service. Students unanimously said that such a singer has a right to “opt out” of that arrangement. “That seems like such an unusual circumstance that they would want them … like a Christian church would force a Muslim singer to sing at their church if they didn’t want to,” one young woman said. Students agreed that no law should force someone to serve another person against their religious convictions.

But when asked if a Christian has the right to opt out of serving a same-sex wedding, the students hesitated.

The question behind this poll is something that is going to continue to arise in our country as we take in more refugees that choose not to assimilate and as Christianity is no longer respected in our culture. What about the Muslim who refuses to drive a truck that transports beer? What about the Muslim taxi driver that refuses a fare because the man is blind and has a seeing-eye dog? What about the checkout person at the supermarket who refuses to scan bacon? Generally speaking, these are employees–not the business owner. Does the business owner have to allow the limitations on their ability to do their job? If these people are given a pass on the basis of their religious beliefs, should Christians also get a pass?

One of the dangers of bringing people into America with a different culture and no desire to assimilate is that it opens the door for lawfare. Lawfare is the use of frivolous lawsuits to advance a political agenda. It is a primary tool of organizations like CAIR (The Council on American-Islamic-Relations) to bring American laws in compliance with Sharia Law. CAIR will create a situation to be used as a test case to further its agenda.

There was a recent instance of a situation where a person who spoke the language needed probably has prevented a lawsuit that was being planned (here). Please follow the link and read the story. We don’t know exactly what was being planned–whether it was a lawsuit or something more serious–but thanks to a lady who spoke the appropriate language, whatever was planned was stopped in its tracks!