The Associated Press posted a story about the cold weather and snow that has hit the southeastern part of America. This is a picture of our neighborhood in eastern North Carolina. The weather is unusual and has temporarily crippled the local area. 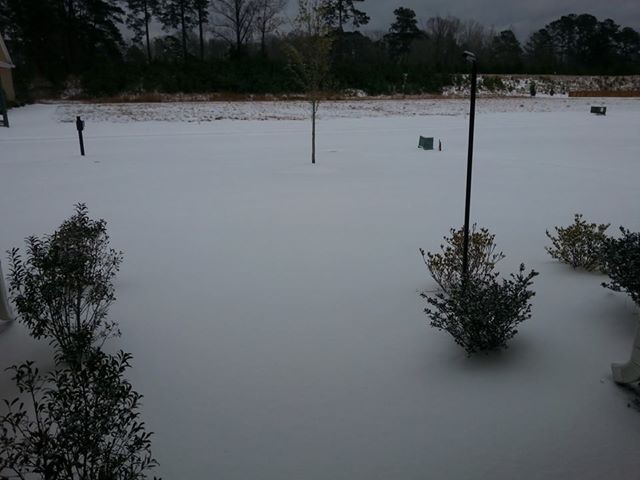 The article reported how people were impacted by the storm and how they coped:

Overnight, the South saw fatal crashes and hundreds of fender-benders. Jackknifed 18-wheelers littered Interstate 65 in central Alabama. Ice shut down bridges on Florida’s panhandle and the Lake Pontchartrain Causeway, one of the world’s longest spans, in Louisiana. Some commuters pleaded for help via cellphones while still holed up in their cars, while others trudged miles home, abandoning their vehicles outright.

Linda Moore spent 12 hours stuck in her car on Interstate 65 south of Birmingham before a firefighter used a ladder to help her cross the median wall and a shuttle bus took her to a hotel where about 20 other stranded motorists spent the night in a conference room.

“I boohooed a lot,” she said. “It was traumatic. I’m just glad I didn’t have to stay on that Interstate all night, but there are still people out there.”

No one knew exactly how many people were stranded, but some employers such as Blue Cross Blue Shield in Alabama had hundreds of people sleeping in offices overnight. Workers watched movies on their laptops, and office cafeterias gave away food.

The good news is that it will be above freezing in most places tomorrow and in the upper 50’s and lower 60’s by Saturday.