There is a drama being played out here, and it will continue to be played out until Americans and the courts put an end to it. The drama includes what is happening in Kenosha and it also includes the recent threatening of the Mayor-elect of New York City by an activist. The activist essentially told the Mayor-elect that if the Mayor-elect chooses to enforce the laws in the city when he takes office, there will be riots. There are those among us who would rather destroy what others have built than successfully build things themselves.

At this point I need to mention that if I were Kyle Rittenhouse’s mother, I would have tied him to the bed to prevent him from going to Kenosha during the riots regardless of how noble his intentions were. However, that is not the question. The fact that he was open carrying a weapon in a riot (legal, but probably not smart) is not the question. Just for the record, of the four people in the incident who were carrying guns, Kyle Rittenhouse was the only person legally entitled to own a gun. The legal question (and the only question that should be asked at this trial) is whether or not Kyle Rittenhouse had the right to defend himself when threatened. During the trial, it was revealed that one of the men shot drew his gun to fire at Kyle Rittenhouse. That evidence alone should be enough for the jury to protect Kyle Rittenhouse’s Second Amendment rights.

So why are we going on day three of jury deliberations? Let’s back up and look at the whole picture. The mainstream media (with no evidence) has portrayed Kyle Rittenhouse as a white supremacist (despite the fact that the three people he shot were white). The media has failed to mention that Kyle Rittenhouse’s father and much of his family lives in Kenosha and that Kyle Rittenhouse when to Kenosha after being asked to help protect private property. Neither of these facts should have any bearing on the verdict, but the omission of these facts is being used to manipulate public opinion. Since the members of the jury have not been sequestered, it is quite likely that they are aware of the media spin and the unrest that spin is fomenting.

Remember, the verdict should be determined by the facts and the law in any case brought before a jury. A verdict should not be influenced by threats of violence against the jury, the judge, or the city. To bow to those threats of violence is mob rule and will only result in future verdicts based on fear of the mob rather than the evidence and law.

Yesterday The Washington Free Beacon posted a list of some of the violence and intimidation engaged in by the political left this week. The article included the following picture: 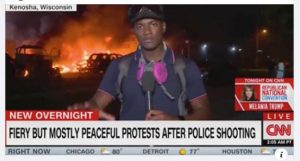 I have a problem with the phrase ‘fiery but mostly peaceful,’ but here is the list of noteworthy events:

6. Left-Wing Protesters Bring Back the Guillotine | The Independent

1. Seattle Rioters Use Rebar and Quick-Drying Concrete to Try to Trap and Burn Cops | KING5 News

It is past time to deal with this foolishness. I need someone to explain to me what a dinosaur museum has to do with any protest. Please follow the link to the article to read the details of these incidents.

The American Thinker posted an article yesterday about a ‘food truck’ supplying rioters’ needs in Kenosha, Wisconsin. The article is based on an article in The Washington Post on Thursday.

A Seattle-based nonprofit group that serves food to protesters said Thursday that several of its members were still in police custody in Kenosha, Wis., after law enforcement officers sprang from unmarked cars and arrested them ahead of Wednesday night’s demonstrations in the city.

The arrests were recorded by a bystander and shared widely on social media, renewing concerns that unidentified officers could be shielded in crackdowns on demonstrators. The organization, known as Riot Kitchen, was a fixture at protests in Seattle this summer.

Cellphone footage of the incident showed officers rushing out of black SUVs and surrounding a silver Toyota minivan belonging to the nonprofit near a Speedway gas station. One officer aimed a gun at the van while another bashed through the passenger-side window. Officers could be seen pulling two people out of the vehicle and handcuffing them.

Sounds pretty radical until you hear the rest of the story.

Turns out the “Riot Kitchen” — yes, it’s really called that — may have had some unusual cuisine on its menu:

…Now, it’s unclear from the report whether the bus used to slop the rioters was transporting incendiary devices or these items were found in the Riot Kitchen’s second vehicle, or there were yet other vehicles, which the Post didn’t go into, given that it was just covering the supposedly dreadful police treatment of this “non-profit” with its underserved clientele.  Most likely, based on the report, the “vehicles” described were the Riot Kitchen’s two vehicles, having raised lots of money (but not quite their goals) on GoFundMe, which is turning out to be quite a useful means of getting cash from anonymous and small fry donors, under the banner of “mental health support” with this pitch to the gullible and maybe not so gullible:

Hey everyone!! We’re RIOT KITCHEN, and we are a no charge kitchen serving protestors, activists, movements and those in need in Seattle WA.

We were founded by Maehem, a queer black woman who started out by wanting to help feed the protestors at The George Floyd protests in Seattle, WA

During CHOP we built a full functioning kitchen in Cal Anderson, with a experienced kitchen staff and a array of vegan, gluten free, vegetarian and other dishes

We want to continue RIOT KITCHEN on and into the future to keep serving our community!

To do that, we need a food truck and licensing. We need about $40,000 to make this happen!

This fundraiser is run by direct supporters of Maehem and her work, namely Maehem’s right hand “Grandpa” as well as Jennifer Scheurle.

Please support us in enabling this wonderful project and its caring people to enrich Seattle’s community now and in the future.

The article at The American Thinker concludes:

The project is a signal of the vast logistical network of these rioters, something that shows they’re organized, and as their aim is to support criminals, part of a conspiracy.  An army marches on its stomach, as Napoleon once said, and Antifa itself is the army; RiotKitchen206 is the food.  Update: Glenn Reynolds at Instapundit has more here.

This “non-profit” got its start, not surprisingly, in Seattle’s CHOP zone.  They have a history of going to Portland for assorted projects, and now they claim they were on their way to feed the rioters in Washington, D.C. when the Kenosha riots happened, and by coincidence, they just happened to be right there.

Their YouTube is an entire collection of gaslightings, trying to tell Americans that they just want to feed people, they’re all about peace, just a Summer of Love, really, persecuted by the Seattle cops, too (putrid language warning), and pay no attention to their name, those knives and fist in their logo, or what the Kenosha cops found in their trucks.

It’s time to investigate totally the funding of the riot bus and bring the people funding the chaos up on RICO (Racketeer Influenced and Corrupt Organizations Act) charges. What is happening in our cities is not spontaneous. It is planned for a purpose.

Unfortunately, political campaigns in America have an awful lot to do with money. The Citizen’s United case in the Supreme Court balanced out the money to some extent, but an unbelievable amount of money still goes directly from union dues to Democrat campaign coffers.
John Hinderaker at Power Line posted an article today about some changes that may be coming to the political landscape because of legal challenges to the role of unions. The article includes the following chart from Open Secrets: 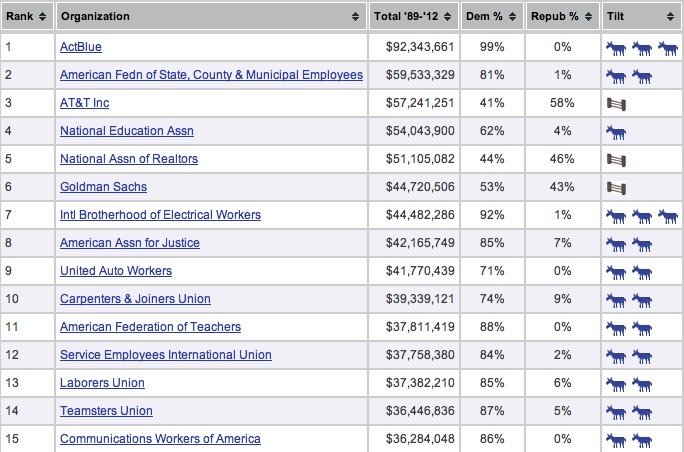 The chart shows the overwhelming disparity between union contributions to Democrat campaigns versus Republican campaigns. Some recent events in Wisconsin may be the beginning steps toward leveling the playing field.

Now that Wisconsin’s educators have been given the right to choose whether or not to belong to a labor union, the unions are struggling to attract enough members to stay afloat. Proving all along that the union leaders didn’t really represent their members, as much as sponge off of them.

Under a provision of Act 10, public employee unions are required to file for annual re-certification by August 30 if they wish to remain a recognized bargaining unit. Thursday Afternoon, Mark Belling broke the news that only 37 percent of the teachers in the Kenosha Unified School District voted to reauthorize the union in a recent vote.

Now, given Brey’s (Christina Brey, speaking for the Wisconsin Education Association Council) comments in the Journal Sentinel, Kenosha is a trend setter, not an outlier.

So what does this mean? Most of Wisconsin’s public employee unions have lost between 30% and 60% of their members in the past two years. Obviously this seriously limits the amount of money they will be donating to political campaigns.

The time has come, I think, to end the preferential treatment under which unions have long operated. Under the law, unions get a special deal: Section 7 of the Clayton Act exempts them from the antitrust laws. Absent that exemption, labor unions would be subject to the Sherman Act’s ban on combinations or conspiracies in restraint of trade. Repealing Section 7 would have one of two consequences: either unions would be deemed illegal per se as price-fixing conspiracies, or they would be subject to the Sherman Act’s Rule of Reason, under which they would have to prove that their net effect is pro-competitive rather than anti-competitive. Either way, unions would be fighting for their lives and would be in no position to dominate the political landscape.