Today The Washington Examiner posted an opinion piece about what can happen when the media refuses to report the obvious. The piece deals with President Franklin D. Roosevelt and his health as he was running for his fourth term as President.

On August 18, 1944, Senator Harry S. Truman met President Franklin D. Roosevelt for lunch at the White House. Truman had just been nominated to be Roosevelt’s running mate that year, and the two men dined on the White House lawn and chatted about the upcoming campaign.

Truman had not seen the president for over a year and was shocked at Roosevelt’s haggard appearance. He noticed that FDR was so ill that he couldn’t even pour cream into his coffee. Despite seeing direct evidence of Roosevelt’s poor health, Truman told reporters afterwards that Roosevelt “Looked fine…He’s as keen as a briar.”

Truman was lying. Roosevelt was a dying man, which was evident to everyone who saw him. But during the 1944 campaign, a conspiracy of silence reigned about his health. Roosevelt had a physical in the summer that showed he had high blood pressure and was suffering from congestive heart failure, but the results were kept from the public.

With the assistance of a compliant media that was overwhelmingly sympathetic to FDR, the issue of Roosevelt’s ability to serve four more years never materialized as a serious campaign issue.

We know what happened as a result of Roosevelt serving as President while his health was failing and he was not at his best.

In February 1945, a dangerously ill Roosevelt traveled to Yalta to meet with Winston Churchill and Josef Stalin to discuss the future of post-war Europe. At Yalta, FDR effectively surrendered Poland and most of Eastern Europe to the Soviets. During the conference, Roosevelt lacked the stamina to keep up Stalin, and the agreements they reached reflected the poor state of FDR’s health.

No one knows how different the course of history would have been if America had elected a President who was in good health during these negotiations.

We now face a similar problem as former Vice-President Joe Biden is set to become the Democrat presidential nominee for 2020. The former Vice-President has always been known for questionable remarks, but we are watching him forget where he is and show unusual aggression toward voters who have come to hear him speak. Either one of these things could be an early sign of dementia. It is ironic that Bernie Sanders, after heart surgery, looks more energized than the former Vice-President.

We live in a complex world with complex problems. Many Americans rely on the mainstream media as a news source (I think that’s a mistake, but that is simply my opinion). If America is to continue as a republic, we need well-informed voters–we can’t afford to be lead by propaganda. Electing a President who is not physically or mentally capable of doing the job because the media refused to tell voters the truth would have major consequences. History tells us that. We can’t afford to repeat history.

Lavrentiy Pavlovich Beria, head of Stalin’s secret police, is said to have told Josef Stalin,  “Show me the man and I’ll find you the crime.”

That is the story of the Democrats and President Trump. This is getting ridiculous. The only good thing about this latest escapade is that it brings into light some of the dealings that Joe Biden had with the Ukraine regarding a prosecutor. The transcript of the telephone conversation between President Trump and Ukrainian President Zelensky creates more of a problem for Joe Biden than it does for President Trump. There is also the YouTube video of Joe Biden bragging about causing the firing of a Ukrainians prosecutor (posted here).

It is time for the Democrats to realize that the presidential election is about a year away and that if the American voters don’t like President Trump, they will vote him out of office. Until that election, the Democrats need to try to do something helpful that is actually supported by the American people. 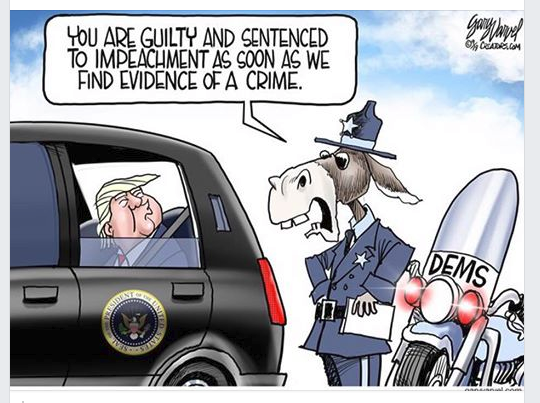