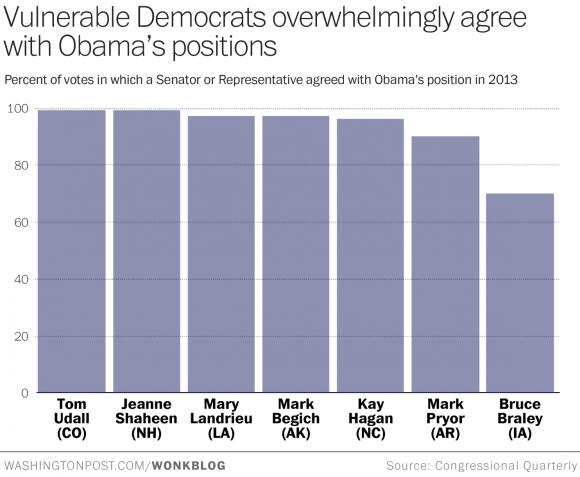 The graph was also posted at Power Line by Scott Johnson. So what is the value of this graph?

On two occasions this campaign season, against all the odds, President Obama has said something useful and, even more improbably, something true. On those occasions he advertised the fact that the Democratic Senate candidates running for election or reelection in states such as Colorado, New Hampshire, Louisiana, Alaska, North Carolina, and Arkansas are in the bag for him. When their vote is needed, Obama can count on it, and when they tell the voters of their states they wake up every day thinking how best they can protect their interests, as Jeanne Shaheen did last night in her debate with Scott Brown, they are playing the voters for chumps.

The article at Power Line also includes the following footnote:

FOOTNOTE: The layers of fact checkers and editors at the Post apparently failed to observe that the Colorado Senator’s first name is Mark, not Tom (who is Mark’s first cousin and the Senator from New Mexico). Tom Udall is not to be confused with Mark Udall. Tom Udall only votes with Obama 94 percent of the time.

The current Democrat party does not allow for voting independence on the part of its elected officials–they are required to follow the party line. If we want a Congress that represents the people it is supposed to represent, we need to change our voting habits.

On Monday, The Corner at National Review posted an article citing actual facts about Hobby Lobby and the benefits it provides for its employees.

The article includes some of the comments the political left has made about the decision:

“This is going to turn the dial back,” Representative Debbie Wasserman Schultz warned on MSNBC. The Democratic party’s national chairwoman added: “Republicans want to do everything they can to have the long hand of government, and now the long hand of business, reach into a woman’s body and make health care decisions for her.”

The article also includes some facts about Hobby Lobby:

That really doesn’t sound like she is being denied healthcare. The article reminds us that Hobby Lobby offers medical coverage for 16 different kinds of birth control for its employees. The legal case was to exclude four methods that are seen to cause abortions. Again, there is no ban on employees using these four methods, but Hobby Lobby will not pay for them.

Those who are screaming themselves hoarse after the Hobby Lobby decision would agree that Yeshiva need not serve unkosher food, and PETA need not include calf meat on its menu. Yes, somehow, Hobby Lobby is evil because it pays for 16 kinds of contraceptives, and expects its employees themselves to purchase four others that might kill human babies.

I disagree with the writer’s conclusion. This is not about free stuff. It’s about convincing the low-information voter that there is a ‘war on women’ in conservative politics and that they need to vote for Democrat candidates. There are very few Americans who will do their homework and get the facts on this case–most will rely on news that quotes the type of statement quoted in the beginning of this article as fact. Would it be fair to say that Democrats regard women’s healthcare as the right to kill babies and that right must be protected?