I posted an article this morning about Jame O’keefe’s video showing how easy voter fraud is in Washington, D. C.  This is the link to the video at YouTube showing exactly what happened (or scroll down two articles and watch it there). Please watch until the end to hear what the person assumed to be impersonating Eric Holder says as he goes to get his identification. It’s brilliant! Anyway, enough of that.

Breitbart.com posted an article today giving the response of the Justice Department to the video.

Desperate to prove that voter ID should not be presented in order to obtain a ballot, the DOJ fired back at O’Keefe and Project Veritas today, with a DOJ official telling tried-and-true media ally Talking Points Memo, “It’s no coincidence that these so-called examples of rampant voter fraud consistently turn out to be manufactured ones.”

Please follow the link to the Breitbart.com story and read the entire article. Also read the comments–they are also very interesting.

Sometimes voter fraud is so poorly done it’s amazing anyone gets away with it. Recently James O’Keefe pulled off one of his sting operations in Washington, D. C., that should have been a total failure. Unfortunately, it wasn’t.

National Review Online reports today that last Tuesday in the Washington, D. C., primary election, James O’Keefe was given a ballot after misleading the person at the ballot box to believe that he was Eric Holder.

The video of this and various other related incidents can be found at YouTube:

The article at National Review points out that James O’Keefe never actually committed fraud because he never specifically claimed to be Eric Holder. If you watch the video of the incident carefully, you can see how carefully worded his statements were. When I posted this article on Monday morning, only 39 people had seen the video. If Americans want an honest election in November, that number needs to increase exponentially.

There will be a response from the Justice Department to this video. I suspect that the first thing they will try to do is charge James O’Keefe with some sort of illegal activity for making his point about voter fraud. Next, they will continue to proclaim that voter fraud does not exist, even though the video shows that it does. They will NOT have an honest discussion of voter fraud and the need for strong voter identification laws. 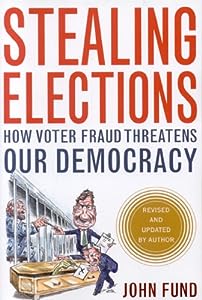 As I mentioned on March 14th at rightwinggranny.com, James O’Keefe was in Vermont filming people getting ballots to vote after claiming to be people who were dead. No member of his crew who asked for a ballot actually voted, but they could have–that is the point.

So what is the Vermont Secretary of State James Condos going to do about this problem? Investigate James O’Keefe of course!

“Same day voter registration is a major incentive to commit fraud. It allows you to register and vote on election day,” explains journalist John Fund, author of Stealing Elections: How Voter Fraud Threatens Our Democracy, which is something of a Bible for election fraud analysts. “Once your ballot is put in with all the others, detecting the fraud is almost impossible. In Vermont, the possibilities of voter fraud are so real that it almost sends the invitations in the mail.”

Condos is threatening O’Keefe for doing his job. “My next phone call is to [Attorney General] Bill Sorrell’s office,” Condos told the Burlington Free Press after learning about O’Keefe’s video.

Still, in the event that O’Keefe were to be arrested, prosecuted, and jailed in Vermont, he need not worry about casting a ballot to replace Condos. In Vermont and Maine, you can even vote from a jail cell.

It should not be news (based on the name of this website) that I am hoping for a new President to be sworn in next year. However, more than that, I am hoping for an honest election where each person’s vote is a legal vote and has equal value. I think voter identification laws are a part of that package.

At the risk of tooting my own horn, I started this website to report on some of the things that seem to be overlooked in the mainstream media. Well, sometimes it seems as if I am reporting things that seem to be purposefully overlooked by the Obama Administration. Sometimes when I read reports of the actions of this administration and compare them with obvious facts, I wonder if I have entered an alternate universe. This article represents one of those times.

In March 2001, I posted an article about voter fraud in Texas (rightwinggranny.com). The article reported that out of 25,000 voters registered by a group called Houston Votes, only 1,793 of those voters were actually people who existed and were eligible to vote. Texas is now in the process of putting a voter ID law in place that will prevent that sort of thing in the future.

CNN reported on March 12 of this year:

A controversial new Texas law requiring voters to present personal identification before going to the polls has been blocked by the Obama administration.

In a letter Monday to state officials, the Justice Department said the legislation could have a discriminatory effect on Hispanics and other minorities.

…The department concluded there is little evidence of voter fraud in Texas warranting the legislative changes.

Meanwhile, James O’Keefe is at it again in Vermont. Big Government posted a video yesterday showing evidence of voter fraud in Vermont. As he did in New Hampshire, James went into the polls and attempted to vote using the names of various dead people. As in New Hampshire, he was successful.

Why is the Obama Administration unwilling to protect the integrity of the ballot box?

The Daily Caller is reporting today that the New Hampshire Senate has passed a bill requiring voters to show identification when they vote.

This is in response to the following video:

The video was done by James O’Keefe and shows people giving the names of people who had recently died receiving ballots to vote. The legislation still has to be passed by the New Hampshire House.

Earlier today I posted an article about the James O’Keefe and Project Veritas video showing how easy it is for dead people to vote in New Hampshire. I would think that after watching the video, the people who monitor elections would be hanging their heads in shame. I guess shame is something of a lost emotion.

The Blaze reported today that the New Hampshire Attorney General’s office is investigating James O’Keefe and Project Veritas. What?! How about investigating election procedures in New Hampshire and figuring out what actions can be taken to prevent dead people from voting? This is a true instance of shoot the messenger.

Has our political system in America become so corrupt that we won’t even attempt to protect the integrity of the vote?

Yesterday John Hinderaker at Power Line posted an article about the dead people who attempted to vote in the New Hampshire primary. Yes, you read that correctly. None of them actually did vote (that would be a felony), but in most cases they would have been able to vote.

Here is the story. James O’Keefe of Project Veritas wanted to show that voter fraud is easy:

On January 10th, Project Veritas reporters walked into New Hampshire Polling Locations during the Presidential Primaries, saying dead people’s names. We stated the name of a dead person we got from the NH obituaries. The names of the deceased were both Registered Republican and Democrats And in almost every case, saying a dead person’s name, we were handed a ballot to cast a vote. We used no misrepresentation and no false pretenses. in fact, in almost every case, we insisted we show ID and they insisted that we vote without showing ID.

There is a video at Power Line showing a number of these encounters.

John Hinderaker concludes at the end of his article:

How much does this kind of fraud go on for real? I think the best evidence that it is widespread is the Democrats’ hysterical reaction to every effort to protect ballot integrity–including, now, threats by Obama’s Department of Justice to persecute states that try to prevent voter fraud.

It sounds as if we need to demand voter ID if we want an honest election in 2012. Otherwise we are taking another step in the direction of becoming a banana republic.