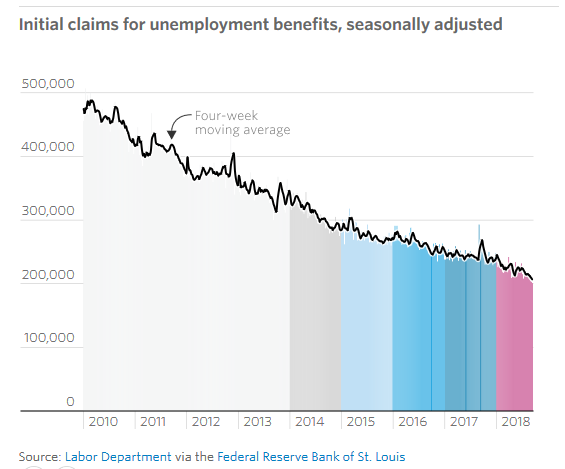 The unemployment numbers just released are good–they are not great because of some of the underlying factors. Investor’s Business Daily reported that in April the unemployment rate dropped to 3.9 percent. That is good news, but there are some other numbers that are cause for concern.

According to the Bureau of Labor Statistics, the workforce participation rate in April was 62.8 percent. That number has roamed between 62.7 and 63 percent since the end of 2015.

The Bureau of Labor Statistics found that the economy added 164,000 jobs in April, and the unemployment level dropped to 3.9%. It was 4.8% when President Trump took office.

Since Trump took office, the economy has added a total of 2.7 million jobs, and since his tax cuts took effect we’ve seen an average 200,000 new jobs each month. Initial jobless claims are at decades long lows as well.

The report also finds, however, that wages rose slightly less than expected in April — with hourly earnings climbing at a 2.6% annualized rate.

…According to the Census household survey, the biggest contribution to the drop in the unemployment rate wasn’t people getting jobs — that survey registered a gain of just 3,000 in April. It’s due mainly to the fact that 410,000 dropped out of the labor force — and no longer count as unemployed.

The article cites some figures explaining changes in the Workforce Participation Rate in various age groups:

The population not in the labor force — they don’t have jobs and aren’t looking — has climbed a stunning 25.3 million over those years.

Think about it this way. If the labor force participation rate were the same today as it was in December 2000, the unemployment rate wouldn’t be 3.9%. It would be 10%!

Yes, many who’ve left the labor force over the past 18 years are baby boomers entering retirement. But that doesn’t come close to explaining the massive increase in labor dropouts.

From my perspective, there are a number of reasons for this change–the federal government has made not working too comfortable. Our safety net has gotten too comfortable for many people, creating multi-generational welfare recipients. We did go through a recession after the housing bubble burst, but we are coming out of that now, and it is time for people to resume their job searches. Another reason for the fact that the workforce participation rate is so low might be that we are graduating students from college with no marketable skills or with the idea that since they just graduated, they can start their careers at the top of the corporate ladder. Some of these graduates refuse to look for jobs outside of their chosen degree field or refuse to begin any place other than at the top. There is also the matter of whatever work ethic students may or may not have learned in college.

The economy is looking better, but we have a long way to go before we can be considered actually prosperous–we need to deal with the debt and we need to shrink government drastically.

Guy Benson posted an article today at Townhall about the American economy under President Trump.

The number of Americans claiming new unemployment benefits has never been so low for so long.  Initial jobless claims, a proxy for layoffs across the U.S., decreased by 9,000 to a seasonally adjusted 233,000 in the week ended April 7, the Labor Department said Thursday. This means claims have now held below 300,000 for 162 consecutive weeks, cementing the longest streak for weekly records dating back to 1967...The current streak eclipsed the previous longest stretch that ended in April 1970. Taking into account the size of the labor force, claims today compared to the late 1960s and early 1970s are much lower…The consistently low claims levels point to labor market health because they mean relatively few Americans are losing their jobs and applying for benefits to tide them over until they can find new employment. After several years of consistent job growth, firms are reluctant to let employees go in a tightening labor market in which many available workers are quickly snapped up.

Trump’s speech came amid surging optimism among American manufacturers thanks to the after-effects of the GOP’s recently-implemented tax reform law. More than 93% of manufacturers have a positive outlook on their company’s prospects in the U.S. economy – the second-highest level ever recorded by the National Association of Manufacturers –  its most recent quarterly survey revealed. Meanwhile, optimism among small manufacturers was at its highest level ever recorded throughout the survey’s 20 year history; 94.5% of companies reported that they were positive about their future. Wage growth among those manufacturers surveyed also rose at the fastest pace in 17 years…The survey showed that manufacturers expected full-time employment to increase by 2.9% on average over the next year, an all-time high by the survey’s standards. Companies also said capital investments are likely to rise by 3.9% over the next 12 months, while inventories are expected to rise by 1.7%.

The two main causes for the economic boom are cutting the regulations that make it difficult for businesses to grow and changing the tax codes so that Americans get to keep more of what they earn. Small business is one of the main engines of job growth in America, and changing the way small businesses pay taxes has a very positive impact on job growth. One other factor in the economic boom is the move toward American energy independence. Low energy costs and low taxes are two things that attract foreign businesses. Because America now has both of these assets, we are more attractive as a place for foreign business to relocate. We are more competitive in the global marketplace because of the policies of President Trump. That is a really good thing.