On Friday, Townhall posted an article that should (but won’t) give pause to the global warming advocates.

Global warming is not a serious topic. No one cares, but the left wants us all to suffer in order to drop the Earth’s temperature by less than a degree or whatever.

These are the most miserable people on Earth. The problem is fighting back against their climate lies is hard when you have the shield of Big Tech there to flag and censor stories that shred their narrative. Before that crackdown, we used to torch the climate change crew. I’ll do so again.

There are some other inconvenient truths noted in the article:

…The accumulation of sea ice was documented here several years ago. Scientists had trouble reaching their research stations in Antarctica in 2015 due to the amount of ice. In fact, in 2013, some 19,000 Manhattan-sized islands of sea ice were created. It’s been noted for its resilience in these heated times.

In that same year, the Arctic Ice Cap was supposed to be gone. By 2013, no more ice cap, right? It grew by over 533,000 square miles. These people are wrong. They were wrong in the 1970s when global cooling was the t-shirt of the week. Global warming is such a non-threat that the CIA’s operation and research into it were terminated in 2015.

Should we be concerned about conservation? Sure—that’s an entirely different thing. Hunters are very keen on this subject as well. That’s not what the green warriors want, however.

Notice how all these global warming policies center on controlling the means of production. They’re not even hiding it anymore, folks.

The earth’s climate is always changing. Evidence of plant life has been discovered under the ice cap in Greenland. That plant life could not exist there today. I believe in doing what we can to keep the air clean and the earth unpolluted, but I also believe in allowing people to eat what they want, stay warm in winter, stay cool in winter, and be relatively free from government control. I am not sure many of the people running around with their hair on fire because the earth is warming understand what is actually behind the movement.

In April 2015 TruthorFiction posted an article stating the following:

It’s true that newspapers across the country published a story about climate change in the Arctic Ocean in 1922.

The article appeared on page 2 of the Washington Post on November 2, 1922, under the headline, “Arctic Ocean Getting Warm; Seals Vanish and Icebergs Melt.” The text of the article reads:

“The Arctic Ocean is warming up, icebergs are growing scarcer and in some places the seals are finding the water too hot, according to a report to the Commerce Department yesterday from Consul Ifft, at Bergen, Norway.

“Reports from fishermen, seal hunters and explorers, he declared, all point to a radical change in climate conditions and hitherto unheard-of temperatures in the Arctic zone. Exploration expeditions report that scarcely any ice has been met with as far north as 81 degrees 29 minutes. Soundings to a depth of 3,100 meters showed the gulf stream still very warm.

“Great masses of ice have been replaced by moraines of earth and stones, the report continued, while at many points well known glaciers have entirely disappeared. Very few seals and no white fish are found in the eastern Arctic, while vast shoals of herring and smelts, which have never before ventured so far north, are being encountered in the old seal fishing grounds.”

The article, which was written by the Associated Press, appeared in scores of newspapers around the country in November of 1922. A researcher named John Lockwood found the article archived at the Library of Congress in 2007.
The article was based on a report that appeared in the November 1922 edition of the Monthly Weather Review. The original report says an expedition was sent by the Norwegian Department of Commerce to the Arctic Circle to survey land and to make “oceanographic investigations.” According to excerpts from the report:

“Ice conditions were exceptional. In fact, so little ice has never before been noted … This is the farthest north ever reached with modern oceanographic apparatus.”

“…It is of interest to note the unusually warm summer in Arctic Norway and the observations of Capt. MartinIngebrigstaen, who has sailed the eastern Arctic for 54 years past. He says that he first noted warmer conditions in 1918, that since that time it has steadily gotten warmer, and that to-day the Arctic of that region is not recognizable as the same region of 1868 to 1917.”

The article notes that this article does not prove that climate change is a hoax. It notes that changes in temperature from year to year can result in significant changes in ice levels. I posted this article to prove that we really don’t know as much as we like to think we do about how climate works. I suspect that the amount of carbon emissions flowing into the atmosphere in 1922 was considerably less than it is today. We can therefore conclude that there might be other factors involved in our changing climate. Put simply, man is not important enough to control the climate.

CBS Local in Minnesota posted a picture on Saturday of icebergs on Lake Superior. This is the picture. 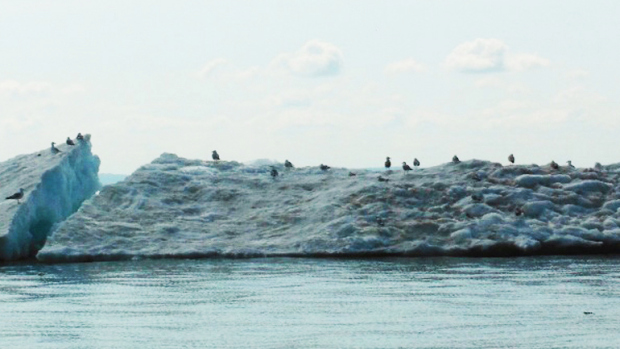 According to a National Geographic report, the summer temperatures of the Great Lakes are expected to be colder this year because more than 90 percent of the lakes had been covered in ice during this past winter.