The Democrats seem to be intent on resurrecting and reinventing the events of January 6th. They continue to investigate while avoiding any evidence that might actually lead to the truth, and there is even a movie that emphasizes the Democrat narrative. 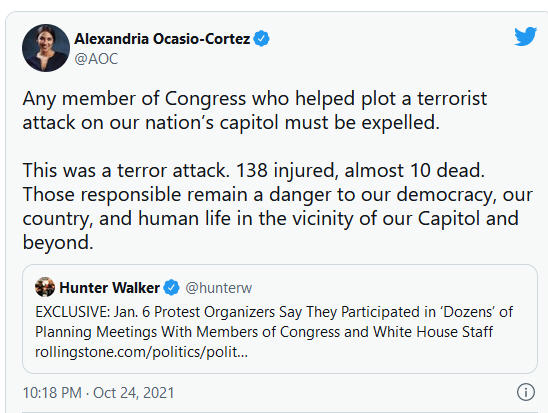 Just for the record, none of that is true.

Undoubtedly, the pro-Trump crowd at the Capitol engaged in a politically motivated riot. Beyond that, however, there is not much else to say. Despite claims to the contrary, the evidence has shown those present were not insurrectionists or terrorists.

None of these facts have stopped Rep. Alexandria Ocasio-Cortez from claiming otherwise, however. In fact, in a tweet published on Sunday, Ocasio-Cortez made the claim that the Jan. 6 riot was a “terror attack” that left “almost 10 dead.”

…In truth, there were four deaths that occurred during the Jan. 6 riot, not “almost 10.” All four of the dead were pro-Trump demonstrators.

Both Kevin Greeson, 55, and Benjamin Phillips, 50, died of heart attacks; Roseanne Boyland, 34, died of “acute amphetamine intoxication” and Ashli Babbitt, 35, died from a gunshot wound to her left shoulder, according to a KOKI-TV report of the D.C. medical examiner’s findings.

Two of the four deaths were of natural causes, a third died from an accidental drug overdose and the fourth — Ashli Babbit — was shot by Captiol police. And, again, all four were among the pro-Trump crowd.

So why are we still talking about this, and why is there so much emphasis on a false narrative? It’s called politics. As we experience supply chain disruptions, unlimited illegal immigration, and inflation, the Democrats needs a winning issue. If they can convince American voters that Republicans (especially Trump supporters) are lawless neanderthals, they might be able to hold their own in the coming gubernatorial and congressional elections. It’s that simple.

There is a very insightful article about January 6th posted in the Hillsdale College magazine Imprimis. Please follow the link to read the entire article.

Hayek’s (Friedrich Hayek, who wrote The Road to Serfdom) overriding concern in The Road to Serfdom was to combat the forces that were pushing people further along that road to servitude. His chief concern was unchecked state power. In a new preface to the book’s 1956 edition, Hayek noted that one of its “main points” was to document how “extensive government control produces a psychological change, an alteration in the character of the people.”

“This means,” Hayek wrote, “that even a strong tradition of political liberty is no safeguard if the danger is precisely that new institutions and policies will gradually undermine and destroy that spirit.”

This dismal situation, Hayek continues, can be averted, but only if the spirit of liberty “reasserts itself in time and the people not only throw out the party which has been leading them further and further in the dangerous direction but also recognize the nature of the danger and resolutely change their course.”

Note the power of that little word “if.” It was not so long ago that an American could contemplate totalitarian regimes and say, “Thank God we’ve escaped that.” It’s not at all clear that we can entertain that happy conviction any longer.

That’s one melancholy lesson of the January 6 insurrection hoax: that America is fast mutating from a republic, in which individual liberty is paramount, into an oligarchy, in which conformity is increasingly demanded and enforced.

Another lesson was perfectly expressed by Donald Trump when he reflected on the unremitting tsunami of hostility that he faced as President. “They’re after you,” he more than once told his supporters. “I’m just in the way.”

Beware the rewriting of the history of January 6th.