There has been some media criticism of the fact that Pat Smith, whose son Sean was killed at Benghazi, spoke at the Republican National Convention. Democrats in particular criticized the fact that she was allowed to speak. Well, the Democrats have upped the ante.

The Washington Times is reporting today that relatives of victims of police shootings have been invited to speak at the Democrat Convention. Wow. Of course the Democrats at the convention expect all the benefits of police protection as they conduct their convention.

John McNesby, president of the Fraternal Order of Police Lodge 5, said the union was “shocked and saddened” by the planned choice of speakers at the convention, which opens Monday in Philadelphia.

“The Fraternal Order of Police is insulted and will not soon forget that the Democratic Party and Hillary Clinton are excluding the widows and other family members of police officers killed in the line of duty who were victims of explicit and not implied racism,” Mr. McNesby said in a statement.

He said it’s “sad that to win an election Mrs. Clinton must pander to the interests of people who do not know all the facts, while the men and women they seek to destroy are outside protecting the political institutions of this country. Mrs. Clinton, you should be ashamed of yourself, if that is possible.”

The Clinton campaign has scheduled former President Bill Clinton to speak Tuesday night with members of Mothers of the Movement, a group that includes relatives of black men killed by police such as Eric Garner of New York and Michael Brown of Ferguson, Missouri. Former Philadelphia Police Commissioner Charles Ramsey, who said the nation is a “powder keg” over the police-involved shootings and assassinations of officers, is also scheduled to speak.

I would like to remind anyone reading the above paragraphs about the details of the death of Michael Brown. Witness who said that he was surrendering have admitted to lying in their original statements.

Ferguson Police Officer Darren WIlson’s account of the confrontation in which Michael Brown was fatally shot has reportedly been leaked, with an independent medical examiner’s report backing up his version of events.

Brown had marijuana in his system and was shot at close range in the hand, backing up claims by a police officer that that there was a violent struggle between the Ferguson, Mo. teen and the cop, an independent medical examiner told the St. Louis Post-Dispatch.

The report supports Wilson’s account, given after he shot and killed the 18-year-old on Aug. 9. Witnesses claimed the teen was surrendering when the cop fired. Police maintained Wilson only used his gun after Brown tried to take it – a life-and-death fight inside a police SUV.

The Democrats are continuing their war on police. It will be interesting to see if this wins them support.

Last month Maureen Faulker, the widow of murdered Philadelphia Police Officer Daniel Faulkner, requested a chance to give testimony against President Obama’s nominee to head the Department of Justice Civil Rights Division. Her husband was killed in 1981 by former Black Panther Mumia Abu-Jamal, who was convicted of murder in 1982. Thirty years after the conviction, nominee Debo Adegbile voluntarily took up Abu-Jamal’s case and the cause in the name of race during his time as the head of NAACP Legal Defense Fund. Republican Senator Chuck Grassley asked for Faulkner’s request to present testimony be granted, but Democrats have blocked her from doing so. The Senate Judiciary Committee will vote today on Adegbile’s nomination.

In January of this year, I posted a copy of the letter from the Fraternal Order of Police (rightwinggranny.com) regarding the appointment of Debo Adegbile. That letter explains why Mr. Adegbile is simply the wrong man for the job.

Mrs. Faulkner has written a letter to the Senate regarding the nomination. Her letter is posted at the Townhall.com link above. Please read the letter. If the Senate approves this nomination, it will be a slap in the face to all of the policemen in America. This appointment is a disgrace.

Judicial Watch posted an article today about President Obama’s nomination of Debo Adegbile to be Assistant Attorney General for the Civil Rights Division.

Adegbile is best known for heading up the NAACP Legal Defense Fund’s race-based assault on the integrity of a dead Philadelphia police office in a quest to get his murderer, Mumia Abu-Jamal, off of death row.

Judicial Watch posted the letter written to President Obama by the Fraternal Order of Police regarding the nomination: 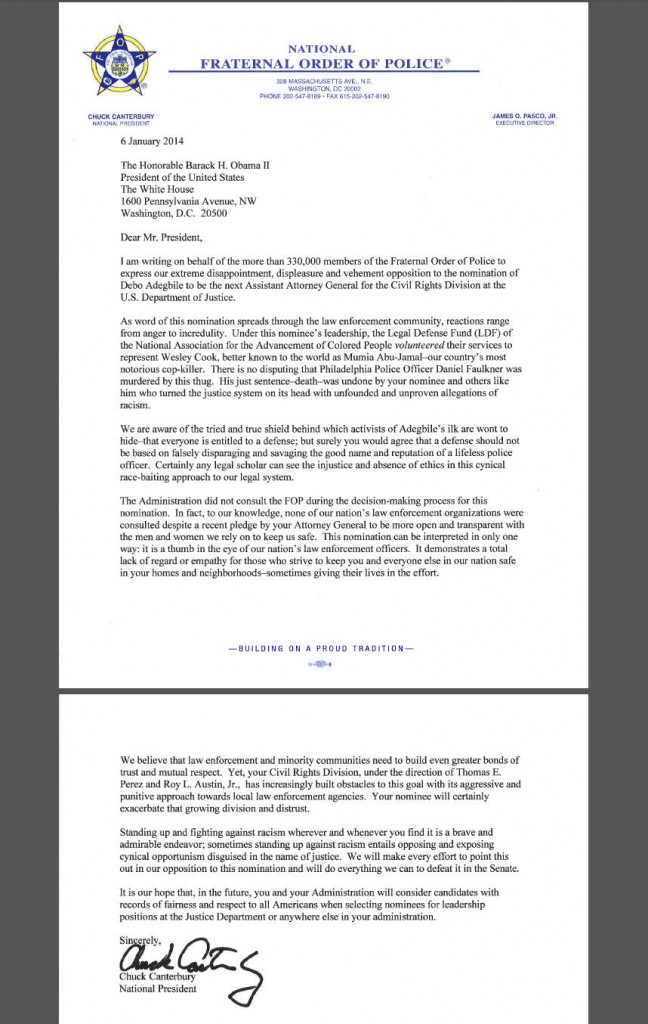 This nomination is an insult to every policeman who has ever served. Hopefully it will not stand.