I have been following the story of the California water crisis for about five years now (rightwinggranny), including posting vacation pictures of the destruction the environmentalists have caused to the Central Valley farmers in the name of saving the Delta Smelt. Well, today The Wall Street Journal posted a story about the Delta Smelt. The Delta Smelt is not doing well, despite the fact that in order to protect the smelt from water pumps, government regulators have flushed 1.4 trillion gallons of water into the San Francisco Bay since 2008.

The agency (the U.S. Fish and Wildlife Service) acknowledges that its “existing regulatory mechanisms have not proven adequate” to arrest the fish’s decline since its listing under the Endangered Species Act in 1993 and that “we are unable to determine with certainty which threats or combinations of threats are directly responsible.”

Let me get this straight–the environmentalists have dumped 1.4 trillion gallons of water into the San Francisco Bay since 2008 in order to save the Delta Smelt. The article reminds us that the amount of water dumped would have been enough to sustain 6.4 million Californians for six years.

The article gives a more plausible explanation for the decline of the fish:

The smelt’s decline might not seem such a mystery today had government regulators more closely examined the science. For instance, a 2008 study by San Francisco State University researcher Wim Kimmerer—a paper used by the Fish and Wildlife Service to support its pumping restrictions—found that the sporadic population losses attributed to pumping during the winter and spring when smelt are spawning failed to take into account “subsequent 50-fold variability in survival from summer to fall” when the young fish are growing.

Other studies have noted that the biggest driver of species abundance in the delta is precipitation, which may explain why the smelt population has plummeted over the past four years of drought after rebounding in 2011—a wet year.

California should be a case study of what happens when extreme environmentalists demand drastic solutions to problems they do not fully understand. The damage they have done to the Central Valley, the former breadbasket of America, may be permanent, and all Americans have been negatively impacted by higher food prices as a result of government policies based on false conclusions drawn by extreme environmentalists. As these same environmentalists declare that global warming is caused by man and is an immediate threat to all of us, we should remember how flawed their science was in regard to the Delta Smelt. It’s time someone stood up for people and their right to exist.

In 2010, I posted some pictures of my summer vacation (It’s my blog–I can do that). The pictures were of the California Central Valley, once the breadbasket of America, now a politically created dust bowl. This is one of the pictures: 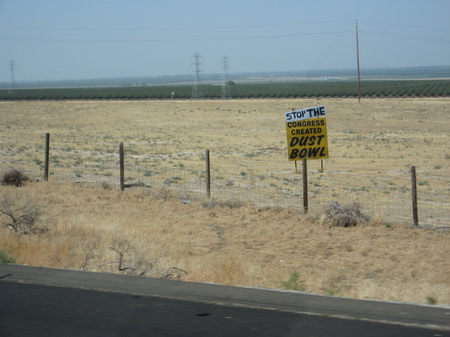 Today’s Sacramento Bee reported that the state and federal water agencies that control most of Northern California’s water are negotiating the details of Governor Jerry Brown’s plan to build two massive water diversion tunnels in the Delta with 279 farm and urban water buyers. These contracts will govern those relationships – and extend the government’s obligation to provide water – for decades.

How the new contracts are shaped will affect water rates for millions of Californians. It also will change how taxpayers at large continue to subsidize the many dams and canals that deliver water.

The process is a kind of house-cleaning for the giant financial investment required to build the proposed tunnels in the Sacramento-San Joaquin Delta. If the $25 billion project is approved next year, the state will be selling bonds for decades to pay for it; and the bond buyers, before committing, will want to see that the state has a solid contractual foundation with water agencies.

The U. S. Bureau of Reclamation this spring cut water deliveries to farmers and the two-thirds of Californians who live south of the Sacramento-San Joaquin Delta to between 20% and 35% of their contractual allocations. The reason? Because 300 three-inch smelt were caught int he pumps at the south end of the delta. Since smelt is designated “threatened” under the Endangered Species Act, it’s being protected at literally all costs.

I am not a scientist, but common sense tells me that you don’t destroy the breadbasket of America for 300 fish. Governor Brown’s solution to the Central Valley’s water problem is very expensive. However, if the voters don’t kill the project because of the expense, the environmentalists will kill it because it will promote growth in an area that is losing people because of unemployment.

In the past four years I visited California about twice a year (my military children were stationed there). It is a beautiful state with a wonderful climate (I live in New England. To me, most other places have a wonderful climate). It was truly sad to drive through the Central Valley (on my way to a family reunion in Santa Rosa) and see the dust bowl that had once been abundant farms that supplied America’s food.

This is a video of a Fox News report about some stuffed animals removed from a California bar. Employees of the bar stated that the animals involved had both been on the wall at the bar for possibly fifty years.

It seems as if the animals involved are illegal to own in California whether they are dead or alive. The obvious questions is, “Were they dead before the law was passed, and if so, does the law still apply?” From what I could find out, the Endangered Species Act was passed in 1973. If these animals have been on the wall for 50 years, then they have been there since 1962. I can’t see how the law could be stretched to apply to them as they were there before the law.

Anyway, watch the video and ask yourself, “Are the stuffed animals in the bar the biggest problem California has right now?”