Kamala Harris is currently considered the up-and-coming Democrat candidate for President in 2020. She achieved that status after an attack on Joe Biden that stretched the truth more than a little. Well, Ms. Harris is serious about her campaign. The Washington Examiner is reporting today that the Harris campaign hired Marc Elias, who heads Perkins Coie’s political law group.

…Elias, who held the same position in Clinton’s campaign, is named in two pending Federal Election Commission complaints and in a recent federal lawsuit alleging that the Clinton campaign broke campaign finance laws when it used Perkins Coie to hire Fusion GPS.

Fusion GPS went on to hire British ex-spy Christopher Steele, who compiled an unverified dossier allegedly based on sources close to the Kremlin which was disseminated to the media and used by the FBI to obtain Foreign Intelligence Surveillance Act warrants targeting former Trump campaign associate Carter Page. Justice Department Inspector General Michael Horowitz is reviewing alleged FISA abuse related to the dossier and Attorney General William Barr launched his “investigation of the investigators” earlier this year.

Clinton’s former presidential campaign manager Robby Mook said in 2017 that he authorized Elias to hire an outside firm to dig up dirt on Trump’s connections with Russia. “I asked our lawyer and I gave him a budget allocation to investigate this, particularly the international aspect,” he said.

Mook said Elias was receiving information from Fusion GPS or directly from Steele himself about the research into Trump and Russia in 2016, and that Elias then periodically briefed the Clinton campaign about the findings.

Neither the Harris campaign nor Elias responded to the Washington Examiner’s request for comment.

I wonder if Mr. Elias’ name is going to come up during the release of the Inspector General’s Report or the questioning of Robert Mueller. Stay tuned. 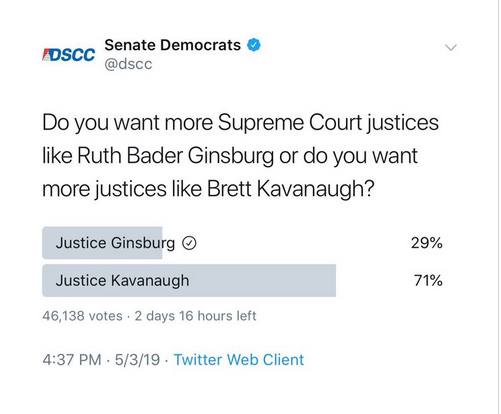 The Washington Examiner posted an article today about Senator Harry Reid‘s announcement that he is retiring. The article lists some of the highlights of Senator Reid’s career.

With his signature ruthless political style, Reid was also instrumental in winning a Senate majority for Democrats in 2006, steering his party through a changing campaign finance landscape, and helping Senate Democrats weather the 2010 Republican wave.

In 2006, shortly after Reid became leader, Democrats wrested back the Senate majority from Republicans, netting a six-seat gain — in no small part due to Reid’s influence on the Democratic Senatorial Campaign Committee and his work with its chairman, Sen. Chuck Schumer, who is expected to succeed Reid as the Democratic leader.

Harry Reid, unfortunately, was a Democrat before he was an American. He did some serious damage to the Senate in recent years–refusing to allow any controversial legislature to reach the floor so that Democrats would not have to vote on anything that might negatively impact their reelections. He also simple removed the filibuster for confirmation of some judges–allowing some very controversial nominations to go through the Senate.

When the history is written after a few years, I don’t think history will be kind to Senator Reid. He did his party’s bidding and aided President Obama whenever possible, but I don’t believe that he acted for the good of America. I wish him the best in his retirement, but I am glad to see him go. I don’t think Senator Schumer will be much of an improvement. What we need are leaders who put their country first and their party second. I am not sure we have very many of those.

National Review posted an article today about the Obama Administration’s support of the DISCLOSE Act. The DISCLOSE Act seeks unprecedented disclosures from private individuals, organizations, and corporations as the price of participating in public debate.

But the administration and its congressional allies hardly need a statute to make public participation in civic life difficult for private citizens. The Obama Campaign and the Democratic Senatorial Campaign Committee have filed complaints against a major conservative social-welfare organization, Crossroads GPS, arguing it should be required to disclose it donors. Even worse, the IRS has responded to dozens of tax-exemption applications by tea-party groups with astonishingly intrusive document demands, seeking not only donor lists but also lists of volunteers.

Some recent problems with disclosing the names of everyone who chooses to take part in the public discourse:

It’s a sad reality of our decayed political discourse that too many dissenting citizens face similar dangers even today. Since 2008, we’ve seen intimidation of religious organizations, death threats, and extreme economic reprisals after disclosures of financial support for allegedly offensive causes. In recent months, formerly anonymous bloggers have been targeted for “SWATings” (where someone calls the police to fraudulently report a violent crime at a person’s home, resulting in a potentially dangerous police intervention). And frivolous lawsuits against controversial speakers have become so common that more than 20 states have adopted protective legislation.

No doubt the Obama administration would condemn the intimidation tactics its reckless “transparency” efforts enable. Yet the government still bears responsibility for the harm that results. The Supreme Court recognized this simple concept: “It is only after the initial exertion of state power . . . that private action takes hold.” In other words, without the government-mandated disclosure, bad actors would be on a tighter rein and have fewer targets.

Please note. My name is nowhere on this blog. The domain name is registered to someone other than myself. That was the agreement I made with my husband and children when I started the blog–they were afraid of repercussions if I said anything that upset anyone. They did not want to see some crazed political zealot attack a little old lady. I tend to share that opinion and thus went along with their request.

Generally transparency is a good idea, but when it endangers people who speak out, it needs to be stopped. See rightwinggranny.com for the story of  Frank VanderSloot, a major contributor to Mitt Romney‘s campaign. His is an example of government intimidation of a donor in a political campaign.