Investors.com posted an article today analyzing the jobs report that was released today. It is a mixed picture. 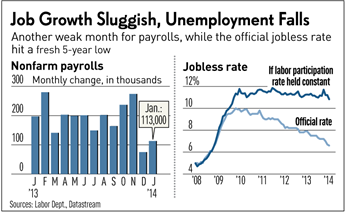 To further muddle the picture, January’s employment report showed a gain of 21,000 manufacturing jobs. Construction added 48,000 workers, the most since the recession, after a sharp weather-related drop in December. Meanwhile, retailers shed 12,900 jobs and cut the average workweek to 29.7 hours.

“We shouldn’t be surprised that the job gains are not at the level that they were in October and November,” said Keith Hembre, chief economist with Nuveen Asset Management. “But I am surprised we didn’t get more of a bounceback.”

Other unexpectedly weak data in the past few weeks include sharp drops in durable goods orders as well as new- and pending home sales.

Federal Reserve policymakers noted the housing pause at their January meeting, but decided other improvements in the economy were enough to justify continuing to taper asset purchases.

At some point the Federal Reserve policymakers are going to have to taper their asset purchases. The longer they postpone that, the more of a shock it is going to be. Unfortunately, the Federal Reserve has propped up the dollar and the stock market to the point where there will not be a soft landing. Because of the financial policies of the Federal Reserve for the past ten or twelve years, we will probably experience a very bumpy landing some time in the next six months. I believe we will come through it, but I also believe it will be very bumpy.