Yesterday The Epoch Times posted an article about people being hospitalized for Covid.

The article notes the following:

As reported by the Associated Press, “The CDC itself has not estimated what percentage of hospitalizations and deaths are in fully vaccinated people, citing limitations in the data.”

At the same time, data collection is done on a state by state basis. In most states, a person is only considered fully vaccinated fourteen days after they have had the full series of the vaccine.

This means that anyone coming into an American hospital who has only had one dose, or who has had both vaccines but had the second one less than two weeks prior, will likely be counted as “unvaccinated.”

So what information is the CDC basing its decisions about Covid on? The only honest numbers we are getting are coming from Israel. 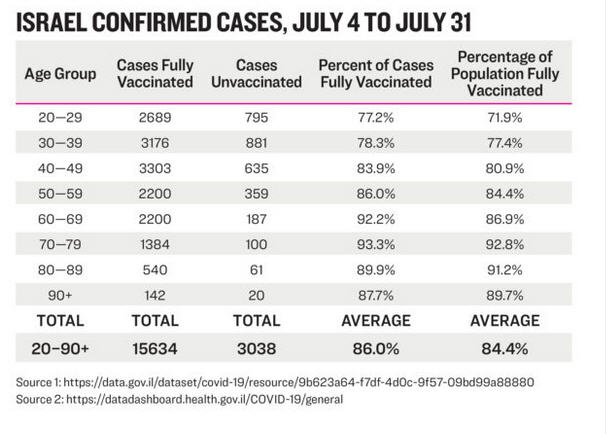 There is a lot of information in this chart that totally contradicts what the American media is reporting. Note the high number of cases in people between the ages of 40 and 49. Also note the low number of cases in those over the age of 70.

In countries with the highest numbers of vaccinated individuals, we are also seeing high numbers of infections. Iceland has one of the most vaccinated populations in the world (over 82 percent) and is reporting that 77 percent of new COVID cases are in fully vaccinated Icelanders, according to Ásthildur Knútsdóttir, Director General of the Ministry of Health.

According to news reports, over 85 percent of the Israeli adult population has been vaccinated. But a July report from Israel’s Ministry of Health found that Pfizer’s vaccine is only 39 percent effective. Though Israeli health officials are telling the public that the cases are more mild in vaccinated individuals, this upsurge in COVID cases and deaths is leading Israel’s prime minister to issue new restrictions.

Dr. Peter McCullough, an academic internist and cardiologist in practice in Dallas, Texas, says that a large number of people in the hospitals right now have, indeed, been fully vaccinated. “Fully vaccinated people are being hospitalized, and … 19 percent of them have died,” McCullough says. “This is not a crisis of the unvaccinated. That’s just a talking point. The vaccinated are participating in this.”

Other physicians are seeing the same thing. “In my practice multiple patients who are fully vaccinated have been admitted to local hospitals,” says Dr. Jeffrey I. Barke, a board-certified primary care physician based in Newport Beach, California. Barke believes part of the problem is exaggeration of the efficacy: “If the vaccine works so well, why are we now pushing a booster?”