Making the trip from Central America to Mexico to the southern border of America is dangerous. The trips are often funded by drug cartels smuggling drugs and trafficked children into America. Generally the people behind the funding are not people you would want to trust. There is also the matter of terrorists entering America in the midst of the overwhelming numbers of people coming here illegally. Meanwhile, the Democrats in the recent debate were all set to give free healthcare and other benefits to people who are coming here illegally. What about putting some money toward medical care for Americans and our veterans? Hopefully most Americans understand that free stuff is never free.

Yesterday Breitbart posted an article about the promises Democrats are making to those who come to America illegally. Has it occurred to these Democrats that their words are a magnet encouraging people to join the caravans coming north?

The article reminds us of the cost of illegal immigration to Americans:

The government also prints out more than one million work permits for foreigners, tolerates about eight million illegal workers, and does not punish companies for employing the hundreds of thousands of illegal migrants who sneak across the border or overstay their legal visas each year, despite the rising loss of jobs to automation.

This policy of inflating the labor supply boosts economic growth for investors because it ensures that employers do not have to compete for American workers by offering higher wages and better working conditions.

Flooding the market with cheap, foreign, white-collar graduates and blue-collar labor also shifts enormous wealth from young employees towards older investors, even as it also widens wealth gaps, reduces high-tech investment, increases state and local tax burdens, and hurts children’s schools and college educations. It also pushes Americans away from high-tech careers and sidelines millions of marginalized Americans, including many who are now struggling with fentanyl addictions. The labor policy also moves business investment and wealth from the Heartland to the coastal cities, explodes rents and housing costs, shrivels real estate values in the Midwest, and rewards investors for creating low-tech, labor-intensive workplaces.

The Washington Examiner posted an article today about the wall that seems to be responsible for the government shutdown.

According to the results of an ABC News and Washington Post poll released Sunday morning, 42 percent of Americans support a wall. That is up from 34 percent one year ago and a previous high of 37 percent in 2017.

With 54 percent, the majority of Americans polled still oppose building a border wall. However, that opposition is shrinking, as 63 percent opposed the wall a year ago and the previous low was 60 percent two years ago.

According to the poll, only about a quarter of Americans — 24 percent — believe there is a crisis-level situation in regards to immigration at the border.

That is a very sad statistic. We have drugs coming across the border, human trafficking is happening at the border, and American citizens are being killed by illegal aliens that should not even be in the country. There is a crisis. A wall will not end that crisis, but it will provide a partial solution that will greatly help the border patrol. Either Americans are not well-informed or they don’t see a crisis because it hasn’t directly impacted them. I am not sure which is the case. At any rate, the wall (and the increased border security requested with it) represents such a small part of the federal budget that there shouldn’t even be a question about whether or not to build it.

In Fiscal Year 2019, the federal budget will be $4.407 trillion. Compare the cost of the wall and the increased security at our border with the annual cost of illegal immigration. The wall is a bargain. 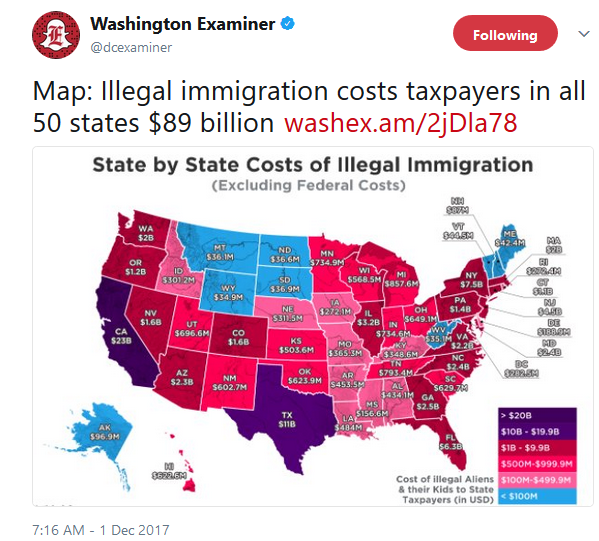 There has been no effort made to close the borders by the Obama Administration. The Administration constantly denies that there is a cost to illegal immigration. Residents of Massachusetts might have a different opinion on that.

Judicial Watch posted an article yesterday detailing the cost of illegal immigration in the Commonwealth of Massachusetts.

Though it violates both state and federal law, Massachusetts spent tens of millions of dollars to give illegal immigrants medical care—including prescription drugs, physical therapy and dental services—through its taxpayer-funded healthcare program for low-income individuals.

Tax-paying residents of the Bay State should be outraged, to say the least. The information comes straight out of a scathing report that contains the findings of an investigation conducted by Massachusetts State Auditor Suzanne Bump. It reveals that questionable or prohibited medical claims totaling $35,137,347 were reimbursed by the state’s Medicaid agency known as MassHealth. A chunk of it went to non-emergency services for illegal immigrants, according to the audit.

The problem has gotten so out of control that a few years ago a Democratic congressman from Ohio introduced legislation requiring foreign countries to reimburse American taxpayers for the exorbitant medical expenses of illegal immigrants. The measure, known as the PAYBACK  Act (Preventing All Your Bucks from Aiding non-Citizens is Key) was estimated to save the U.S. government billions annually and ensure that public funds were not used to finance healthcare services for illegal immigrants. The bill was referred to the House Subcommittee on Border, Maritime and Global Counterterrorism for consideration but didn’t get very far after that.

How long will American taxpayers put up with this?