A friend of mine who is in radio advertising tells me that radio stations do not have the ability to refuse political ads. During an election season, a station must air all ads that a political campaign pays for. Evidently this is the result of the fact that radio stations are controlled by the Federal Communications Commission. Unfortunately the new media is very loosely controlled by anything. This is a very mixed blessing. I don’t want the government telling me that I have to accept political ads on my blog whether or not I agree with the ads. However, the censorship of conservative speech that is going on at YouTube, Facebook, Google, Twitter, etc., is not acceptable.

Breitbart is reporting today that according to a report by 60 minutes more than 300 of President Donald Trump’s political ads have taken down by Google and its video platform YouTube, mostly over the summer.

The CBS reporters were unable to find specific reasons for the mass takedowns of Trump ads, a common problem with social media companies, which are often reluctant to explain precisely why a ban or other act of censorship has happened. “We found very little transparency in the transparency report,” concluded 60 Minutes.

The article includes the following quote from CBS News:

60 Minutes correspondent Lesley Stahl asked Wojcicki, “Have you taken down any of President Trump’s ads at all?” YouTube’s CEO responded, “There are ads of President Trump that were not approved to run on Google or YouTube.” When pressed for an example, Wojcicki added, “Well, they’re available in our transparency report.”

In response to concerns raised after the 2016 election cycle, Google and YouTube, like Facebook, keep a searchable archive of political ads that have run on the site.

60 Minutes reviewed the archive to learn more about President Trump’s problematic political ads. We found that over 300 video ads were taken down by Google and YouTube, mostly over the summer, for violating company policy. But the archive doesn’t detail what policy was violated. Was it copyright violation? A lie or extreme inaccuracy? Faulty grammar? Bad punctuation? It’s unclear. The ads determined to be offending are not available to be screened. We found very little transparency in the transparency report.

We are coming into a very important election season. American voters need to hear both sides of every campaign. We already know that the mainstream media is extremely biased. How are people supposed to get information when free speech is being suppressed? 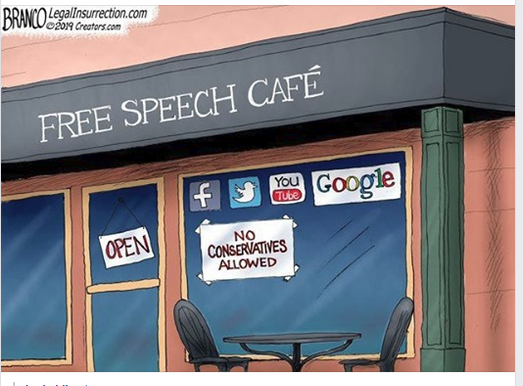 It is becoming obvious that Facebook is doing what it can to limit conservative speech. Their labeling of Diamond and Silk as “unsafe to the community” would have been hilarious if it wasn’t a threat to free speech. Facebook is a private company and has the right to post what they want. We as consumers have the right to use Facebook or not use Facebook. I won’t be boycotting Facebook–it keeps me up to date as to what my grandchildren are up to, but I do understand that the information playing field on Facebook is not level. Please follow the link to The Gateway Pundit to see the actual numbers on the censorship that has already taken place–it is stunning.

The article included the following:

Top conservative websites have seen a stunning drop in their Facebook traffic. This was no accident. This was the plan.

In January 2017, Facebook began making algorithm changes to make sure conservative news was no longer so influential. The Gateway Pundit Facebook traffic has consistently decreased with each algorithm change.

A March 2018 study by The Outline organization found conservative publishers were hit the hardest by Facebook algorithm changes. The study also showed that The Gateway Pundit was hit the hardest.

Facebook official Campbell Brown, a former anchor on NBC and CNN, told attendees at a recent technology and publishing conference that Facebook would be censoring news publishers based on its own internal biases. And they did.

The best way to counter this is to form a conservative Facebook. I am sure some entrepreneur somewhere is already working on that!

The alternative media has had an impact on the politics of America. Facebook and Twitter have been a place where conservatives could share information and ideas. Well, that is changing. According to an article posted at The Gateway Pundit yesterday, google and Facebook are purging conservative content from Facebook and YouTube. That is not a surprise, it is simply an unfortunate truth. Because many arguments by the political left are based on emotion rather than fact, they do not like engaging in rational debate. Thus, if they can, they shut down the conservative side of the debate.

The article lists the websites that have been blacklisted or targeted by Facebook and google:

Young Cons: Extremely popular conservative news site and received millions of daily readers during the election.  The website received nearly all of its traffic from Facebook. Since 2016 Facebook shut down stories to Young Cons.  Each algorithm change meant less traffic for the popular website.  YoungCons was blacklisted by Facebook and struggles to maintain readers.  The site regularly switches domains to save traffic.

SarahPalin.com: With over 4 million fans one of the popular conservative pages on Facebook until Facebook blocked all traffic to the website.  The page was forced to change the domain to save traffic numbers.

Right Wing News:  Right Wing News grew to an enormous website in the past few years thanks its popularity on Facebook. In July of 2015, in just a week, the Right Wing News Facebook page reached 133 million people. Because conservatives were sharing content they were interested in, Right Wing News (with 3.6 million Facebook likes ) was driving the same amount of web traffic as some of the biggest newspapers in America.  Since the 2016 election Facebook blocked traffic to the website.  Owner John Hawkins announced he was shutting down the website in January.

The Gateway Pundit: TGP was ranked as the 4th most influential conservative news source during the 2016 election. The site in 2016 received nearly a third of its traffic from Facebook. This past weekend Facebook blocked all traffic from recent stories to the website. TGP advertised with Facebook and is another top conservative website blacklisted by the company. TGP is also shadow-banned by Google and frequently attacked and smeared by the liberal media.

Breitbart.com:  Breitbart was the most influential conservative news source in 2016 with a massive audience.  Since the election Breitbart is constantly targeted and smeared by far left operations.  Breitbart advertising was targeted by Sleeping Giants and other Soros sites.

InfoWars:  Infowars is another dominant conservative site with enormous traffic.  After several years of video production and tens of thousands of video YouTube gave Infowars its third strike this week and threatens to shut the YouTube Channel down.

Natural News: A very prominent health website and the world’s top source on natural health. The site receives tens of thousands of readers every day. YouTube wiped out over 1,700 videos covering everything from nutrition, natural medicine, history, science and current events.

Prager Report:  PragerU, a conservative educational site, is suing Google and its subsidiary YouTube, accusing the video site of censoring its online videos because of their political leanings.  YouTube has banned several of its videos including segments on abortion and Islam.   Prager U has a massive conservative audience in the millions.

Pamela Geller.com:  Pamela is well-known for speaking out against radical Islam.  ISIS has threatened to behead her several times.  During the election PG had over 100,000 daily views from Facebook.  Today Facebook has shut down most of her traffic.  Her website suffered serious losses in revenue since the election.

Diamond and Silk: Pro-Trump YouTube sensations have a suit against YouTube. The Trump supporters announced in August 2017 that 95% of their videos have been demonetized on YouTube.

I will admit that I do not have 100% confidence in all of these websites, but it is troubling that they are being taken down. We may actually have to fight for the First Amendment rights many of us took for granted for so long.