Breitbart reported yesterday that Senator Lindsey Graham has stated that he would work to end a Senate impeachment trial of President Donald Trump as soon as possible. That is not the right way to handle this. The American people have been bombarded with ‘impeach President Trump’ for almost three years. They have heard lie after lie and accusation after accusation about what the President is or has done. An impeachment trial in the Senate is probably the only chance the President will get to present the evidence which disputes those lies. We need a Senate trial that calls as witnesses the Ukrainian prosecutor that was fired, Hunter Biden, former Vice-President Joe Biden, Adam Schiff, Andrew Weissmann, Lisa Page, Peter Strzok, Andrew McCabe, James Comey, etc. These people need to be forced to testify under oath about their actions from 2016 forward. FISA Warrants need to be looked at.

Graham said, “Here’s what I’m going to do with the trial: I’m going to try to get it over as quickly as possible, listen to the House case — let them present their case. If there’s nothing new and dramatic, I would be ready to vote, and we can do all this other stuff in congressional oversight.”

I totally disagree. It is time for the whole truth to come out. If those responsible for the attempted coup are not held responsible, their actions will be a template for the future removal of duly-elected presidents.

On July 6, The Conservative Treehouse posted the following tweet: 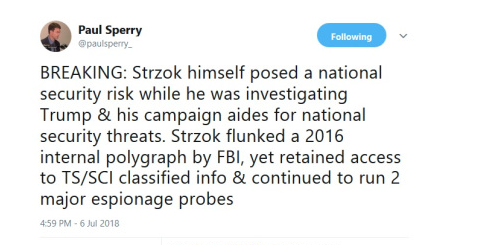 So what is this about?

Yes, FBI Agent Peter Strzok failed his polygraph and his supervisors were notified on January 16th, 2016, his results were “out of scope“. Meaning he failed his polygraph test.  Yet he was never removed from any responsibilities; and against dept policy, he did not have his clearance revoked until he could clear.

The article includes a video of Rod Rosenstein’s testimony before Congress regarding the matter.

The article explains what happened after Strzok failed his polygraph:

After Strzok was recently removed from official responsibility within the FBI, his security clearances were retroactively revoked.  That revocation was due to OPR review and was a retroactive revocation action initiated by career officials within the FBI to cover-up (ie. CYA) the two-and-a-half years he was allowed to work when he should not have been.

Current FBI officials, including Trump appointed FBI Director Christopher Wray, are covering up the scandal within the FBI in a misguided effort to save the institution.

This is the same reason the FBI hid the Strzok/Page memos and emails away from IG review and congressional oversight.

There is a massive, ongoing, ‘institutional’ cover-up within the DOJ and FBI.  These are simply examples highlighting the severity therein.  Peter Strzok and his legal team are counting on the need for the institution to be protected as their shield from any prosecution.

Americans are rapidly losing faith in both the FBI and DOJ because of the lack of accountability of their leadership. It is time to remove the leadership and restore the integrity of these agencies.

Catherine Herridge posted a story at Fox News today about recent clashes between Congress and the Department of Justice. It is becoming very obvious that Deputy Attorney General Rod Rosenstein is not a fan of Congressional oversight.

Deputy Attorney General Rod Rosenstein threatened to “subpoena” emails, phone records and other documents from lawmakers and staff on a Republican-led House committee during a tense meeting earlier this year, according to emails reviewed by Fox News documenting the encounter and reflecting what aides described as a “personal attack.”

The emails memorialized a January 2018 closed-door meeting involving senior FBI and Justice Department officials as well as members of the House Intelligence Committee. The account claimed Rosenstein threatened to turn the tables on the committee’s inquiries regarding the Russia probe.

“The DAG [Deputy Attorney General Rosenstein] criticized the Committee for sending our requests in writing and was further critical of the Committee’s request to have DOJ/FBI do the same when responding,” the committee’s then-senior counsel for counterterrorism Kash Patel wrote to the House Office of General Counsel. “Going so far as to say that if the Committee likes being litigators, then ‘we [DOJ] too [are] litigators, and we will subpoena your records and your emails,’ referring to HPSCI [House Permanent Select Committee on Intelligence] and Congress overall.”

A second House committee staffer at the meeting backed up Patel’s account, writing: “Let me just add that watching the Deputy Attorney General launch a sustained personal attack against a congressional staffer in retaliation for vigorous oversight was astonishing and disheartening. … Also, having the nation’s #1 (for these matters) law enforcement officer threaten to ‘subpoena your calls and emails’ was downright chilling.”

This Thursday we will finally see the Inspector General’s report. It will be interesting to see if Rob Rosenstein is mentioned in this report.

Scott Johnson at Power Line posted an article today about the ongoing efforts of Devin Nunes, Chairman of the Permanent Select Committee on Intelligence in the U.S. House of Representatives, to obtain information from the Federal Bureau of Investigation (FBI). The article notes that Kimberley Strassel has entitled her weekly column at The Wall Street Journal “What is the FBI hiding?” It is beginning to look as if they are definitely hiding something.

The article at Power Line notes:

Strassel notes that House Intelligence Chairman Devin Nunes has just sent another letter to Deputy Attorney General Rod Rosenstein and FBI Director Christopher Wray to demand yet again that they comply with an August 2017 subpoena and hand over, among other things, the electronic communication—“EC” in investigative jargon—that officially kicked off the counterintelligence investigation. In his letter, Rep. Nunes states that the FBI has provided only a “heavily redacted” version of the EC. Beyond that, the FBI would prefer not to give it up.

Rep. Nunes is not amused. He writes: “On March 23, 2018, the FBI’s Assistant Director for Legislative Affairs informed the Committee that the FBI would refuse to further unredact the EC based on its supposed sensitivity. The document in question is not highly classified, and law enforcement sources have apparently not been shy about leaking to the press information that the Department and Bureau refuse to share with Congress.”

The article at Power Line includes a copy of the letter sent by Representative Nunes. It is unfair to ask Congress to exercise Congressional oversight without giving them the requested information. Hopefully the FBI will cooperate in the near future.

Sara Carter has also been following this story. More details are available on her website.