Yesterday The Daily Caller posted an article that explains a few things that were curious at the time. When viewing these events, it’s a good idea to consider the underlying currents–establishment Republicans don’t want the wall any more than the Democrats. Their reasons are different, but the goal is the same. That is why the Secure Fence Act of 2006 was never actually carried out.

100 percent fed up detailed the timeline of events following the passage of the Secure Fence Act of 2006 in an article posted on August 16, 2015.

Here are some highlights from that timeline:

In his speech in El Paso on immigration reform on May 10, 2011, Obama declared that the fence along the border with Mexico is “now basically complete.” Like much of what comes out of the Obama administration, that was a lie. What was supposed to be built was a double-layered fence with barbed wire on top, and room for a security vehicle to patrol between the layers. Except for 36 of the seven-hundred-mile fence, what was built looks like the picture above or the one below.

This is the above picture: 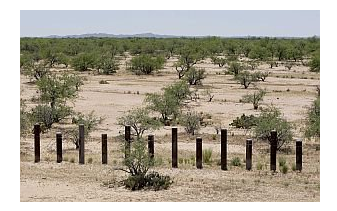 This is the below picture: 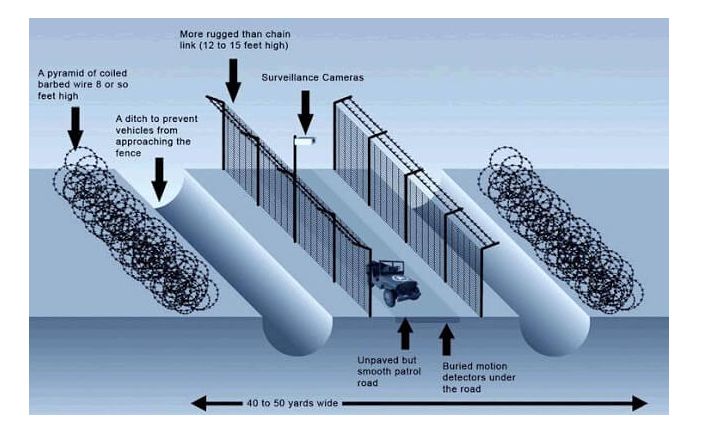 Somehow the two pictures do not appear to be the same.

So what happened? The article reports:

The first blow against the promised fence was made by Kay Bailey Hutchison, Republican Senator from Texas, at the urging of DHS she proposed an amendment to give the Department discretion to decide what type of fence was appropriate in different areas. The law was amended to read,
“Nothing in this paragraph shall require the Secretary of Homeland Security to install fencing, physical barriers, roads, lighting, cameras, and sensors in a particular location along an international border of the United States, if the Secretary determines that the use or placement of such resources is not the most appropriate means to achieve and maintain operational control over the international border at such location.”
Hutchison’s amendment was included in a federal budget bill in late 2007 despite the fact that Rep. Peter King, R-N.Y., had a cow…he argued the amendment effectively killed the border fence promised in the 2006 bill, he was right. Hutchison’s intentions may have been honorable, but she didn’t foresee Barack Obama being the next president.

Here’s the bottom line. Back in 2006, the people of the U.S. were promised a border fence. Since then thanks to Kay Bailey Hutchison and Barack Obama 95% of the fence wasn’t built. The arguments against the fence are bogus especially if you look at Israel’s history. It’s time for America to demand that its leaders build the fence they promised. No one can honestly say it wont work, after all, it hasn’t been tried.

Yesterday after an interview with President Trump, The Daily Caller reported:

But after the president signed the massive, $1.3 trillion spending package, Ryan reneged on his commitment.

“Well, I was going to veto the omnibus bill and Paul told me in the strongest of language, ‘Please don’t do that, we’ll get you the wall.’ And I said, ‘I hope you mean that, because I don’t like this bill,’” the president recounted in an exclusive Wednesday interview with The Daily Caller.

“Paul told me in the strongest of terms that, ‘please sign this and if you sign this we will get you that wall.’ Which is desperately needed by our country. Humanitarian crisis, trafficking, drugs, you know, everything — people, criminals, gangs, so, you know, we need the wall.”

“And then he went lame duck,” Trump said.

Paul Ryan began well. He stood up to President Obama on various issues (without actually accomplishing anything). He began as a budget hawk, trying to keep spending under control. However, he somehow became part of the Republican establishment and went down the wrong path. I seriously doubt that he ever had any intention of building the wall.

On December 26th, Byron York posted an article at The Washington Examiner about building a border wall (or border fence).

In 2006 Congress passed the Secure Fence Act, which mandated the construction of multilayer pedestrian fencing along about 600 miles of the U.S.-Mexico border. It passed with big, bipartisan majorities: 283 votes in the House and 80 in the Senate. Some top Democrats who are still in the Senate today supported the fence: Chuck Schumer, Dianne Feinstein, Ron Wyden, Debbie Stabenow, and Sherrod Brown.

Just the next year, Congress made clear it didn’t really mean what it said. The new law was amended to make fence building optional.

In 2013, Congress got back into the fence game. The Gang of Eight comprehensive immigration reform bill included something called the “Southern Border Fencing Strategy.” It called for 700 miles of at least single-layer pedestrian fencing along the border. It wasn’t a standalone measure; the fence was to be part of a broader package of border security measures alongside provisions that would create a process by which the nation’s 11 million illegal immigrants would ultimately gain a path to citizenship.

I wonder if the Democrats would be so anxious to provide a path to citizenship for illegals if the illegals who were granted citizenship were not allowed to vote for ten years or so.

The article lists the Senators who voted for the Southern Border Fencing Strategy:

With citizenship in the deal — even citizenship that would take a decade to achieve in some cases — Democrats were fully on board for a border barrier. The Gang of Eight bill passed in the Senate with 68 votes, including unanimous Democratic support. Name any Democrat who is in the Senate today who was there for that 2013 vote — Schumer, Durbin, Murray, Baldwin, Bennet, Blumenthal, Brown, Cantwell, Cardin, Casey, Coons, Feinstein, Gillibrand, Hirono, Kaine, Klobuchar, Leahy, Manchin, Menendez, Merkley, Murphy, Reed, Sanders, Shaheen, Stabenow, Tester, Warner, Warren, Whitehouse, Wyden — name any, and they voted for the bill that included the Southern Border Fencing Strategy.

Now the government is 1/4 shut down (not necessarily a bad thing) because those same Senators oppose building a border wall (which they can call a fence if they like). What changed?

This is a description of a bill passed in 2006. (Information on any Congressional legislation can be found at Thomas.gov).

(This measure has not been amended since it was passed by the House on September 14, 2006. The summary of that version is repeated here.)

Secure Fence Act of 2006 – Directs the Secretary of Homeland Security, within 18 months of enactment of this Act, to take appropriate actions to achieve operational control over U.S. international land and maritime borders, including: (1) systematic border surveillance through more effective use of personnel and technology, such as unmanned aerial vehicles, ground-based sensors, satellites, radar coverage, and cameras; and (2) physical infrastructure enhancements to prevent unlawful border entry and facilitate border access by U.S. Customs and Border Protection, such as additional checkpoints, all weather access roads, and vehicle barriers.

Defines “operational control” as the prevention of all unlawful U.S. entries, including entries by terrorists, other unlawful aliens, instruments of terrorism, narcotics, and other contraband.

Directs the Secretary to report annually to Congress on border control progress.

States that if an area has an elevation grade exceeding 10% the Secretary may use other means to secure such area, including surveillance and barrier tools.

Directs the Secretary to: (1) study and report to the House Committee on Homeland Security and the Senate Committee on Homeland Security and Governmental Affairs on the necessity, feasibility, and economic impact of constructing a state-of-the-art infrastructure security system along the U.S. northern international land and maritime border; and (2) evaluate and report to such Committees on U.S. Customs and Border Protection authority (and possible expansion of authority) to stop fleeing vehicles that enter the United States illegally, including related training, technology, and equipment reviews.

This is the vote in the Senate:

Note that Senator Hillary Clinton and Senator Barack Obama voted to build the fence. Before the Democrats decided to make the border fence a political issue, they supported a border fence because they understood that it was necessary for national security. Unfortunately some time between 2006 and 2016 the Democrats chose to put party politics above national security. The border fence was never built, but the authorization is still there. It will be interesting to see if President Trump takes advantage of that authorization.