“Baseline budgeting” is one of those Washington terms that sounds very dry and boring. In reality, baseline budgeting is one of the most sinister ways that politicians claim to cut spending when they are actually increasing spending. The Congressional Budget Office defines the baseline as a benchmark for measuring the budgetary effects of proposed changes in federal revenue or spending, with the assumption that current budgetary policies or current services are continued without change. The baseline includes automatic adjustments for inflation and anticipated increases in program participation. Baseline, or current services, budgeting, therefore builds automatic, future spending increases into Congress’s budgetary forecasts.

Baseline budgeting tilts the budget process in favor of increased spending and taxes. For example, if an agency’s budget is projected to grow by $100 million, but only grows by $75 million, according to baseline budgeting, that agency sustained a $25 million cut. That is analogous to a person who expects to gain 100 pounds only gaining 75 pounds, and taking credit for losing 25 pounds. The federal government is the only place this absurd logic is employed.

Just the News posted an article (updated today) about one result of this practice.

The Golden Horseshoe is a weekly designation from Just the News intended to highlight egregious examples of wasteful taxpayer spending by the government. The award is named for the horseshoe-shaped toilet seats for military airplanes that cost the Pentagon a whopping $640 each back in the 1980s.

This week, in honor of pending federal budget negotiations, our award is going to the entire U.S. government for spending a total of $91 billion taxpayer dollars this month last year, in order to ensure their individual agency and organization budgets would not shrink, as Congress negotiated a new deal.

Every year, in corporate offices around the country, departments coming up on the end of their fiscal term rush to spend any additional funds that might be left on hand, lest they be left with a surplus of cash that would lead their corporate overlords to believe they could do just as much work during the next year, with fewer dollars. Parts of the federal government face the same problem every year, as Congress spends each September renegotiating the federal budget to keep the government funded.

The article concludes with some specifics:

While all parts of the government should assume appropriate responsibility for their year-ending spending sprees, it is worth noting that in 2019, 81% of all contract spending occurred across just five departments of government. Of the $91 billion spree, the Pentagon spent $57.5 billion, Health and Human Services spent $5.7 billion, Veterans Affairs spent $3.8 billion, the General Services Administration spent $3.6 billion, and Homeland Security spend $3.5 billion.

In 2019, the federal government spent $575 billion in total on contracts. So, about one sixth, or just under 16%, of those dollars were spent during the last month of the fiscal calendar. By a long shot, September typically sees the highest annual monthly rate of spending from the federal government.

The federal government is once again entering the period of the year when, despite massive coronavirus relief spending, agencies will throw caution to the wind and spend like there’s no fiscal tomorrow.

And that, my friends, is why the deficit is growing and the value of our money is shrinking.

On September 24, The Daily Signal posted an article about some recent comments made by Senator Joni Ernst. The Senator highlighted the practice of ‘Christmas in September’ spending by government agencies. There are some problems with the way our federal government’s budgeting system works. There is something called ‘baseline budgeting.’ This simply means that your starting point for your yearly budget is how much you actually spent of last year’s budget. Therefore, unless you want your budget to be cut this year, you had better spend all of the money you had in your budget last year. This means that as the fiscal year draws to a close, government agencies have the incentive to spend wildly. It also results in statements that actually make no sense but are widely accepted as fact. For instance, if I ask for a ten percent increase in my budget and only get a five percent increase, I will complain that my budget was cut five percent. In any other world, I got a five percent increase. In the world of government, I got a five percent cut. That is the reason that even though you are reading that the federal budget got cut, the spending actually increased. Unfortunately, to Washington it is all a game. Wild spending of taxpayer money is not a problem to our Congress–only to the taxpayers who have to pay the bill.

The article at The Daily Signal reports:

The fourth-ranking Republican in the Senate called on colleagues Tuesday to pass her legislation to reduce wasteful government spending and rein in agencies’ spending practices.

“If not spent by midnight on Sept. 30, leftover dollars expire and can no longer be used,” Ernst said. “Rather than returning the money to taxpayers, binge-buying bureaucrats are wasting billions of taxpayer dollars needlessly.”

The federal government’s fiscal year ends Sept. 30, and Ernst’s legislation, called the End of Year Fiscal Responsibility Act, would end agencies’ annual 11th-hour sprints to spend all their budgeted money before the fiscal year runs out.

Her bill would curb how much an agency could spend in the last two months of the fiscal year to no more than what the agency usually spends each month on average during the rest of the year.

…“This bill won’t end all wasteful spending, but it will force agencies to put more thought into long-term planning and curtail the bad habit of out-of-control impulsive spending,” Ernst said.

“With our national debt now surpassing $22 trillion, Washington should be looking for ways to save by canceling or delaying unnecessary expenses, rather than splurging on end-of-year wish lists,” Ernst said.

Another piece of legislation pushed by Iowa’s junior senator would keep her colleagues from returning home until they passed a budget.

“Through my No Budget, No Recess Act, members of Congress would be prohibited from leaving Washington if we fail to pass a budget by April 15 or approve regular spending bills by Aug. 1,” she said.

The government must stop enabling agencies to spend money that shouldn’t be spent, Ernst added:

I think Senator Ernst has some really good ideas.

The following graph was posted at The Washington Examiner yesterday: 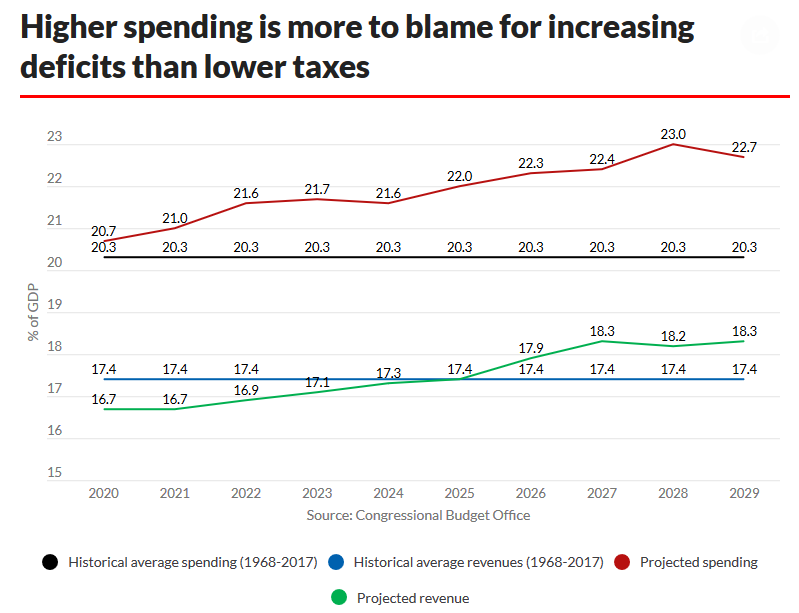 As shown in the chart below, in the 50 years prior to the effective date of the Trump tax cuts (1968-2017), tax revenue averaged 17.4 percent of gross domestic product, while spending averaged 20.3 percent. With the Trump tax cuts in place, revenue is below the historical average for the next few years, but by the middle of the decade, it returns to that average and then surpasses it as some provisions of the tax cut begin to expire. By 2029, the end of the CBO projection period, revenue reaches 18.3 percent — or nearly one point of GDP above its historical average.

We need some serious budget-cutting in Washington. It is time for baseline budgeting to stop. Department budgets need to start from scratch and justify every penny.

On Saturday the Washington Post posted an article about some of the end-of-the-year spending done by government agencies. The spending is a result of one of the side effects of baseline budgeting, which is something our government needs to get rid of. Baseline budgeting is the concept that a department’s budget is based on how much money they spent in the previous year. If they spend 90 thousand dollars and their budget was 100 thousand dollars, the department budget will be 90 thousand dollars in the following year. If they don’t spend all of the money in their budget, their budget is cut. This creates a mad rush to spend their entire budget by September 30, the end of the fiscal year. If they spend the full amount and ask for a 10 percent increase and get a 5 percent increase, that is considered a 5 percent budget cut. That is how Congress can claim they are cutting the budget while the spending continues to increase. These two concepts explain some of the rather interesting end-of-the-year spending done in the past few weeks by the government. As you read this, remember that this is under sequestration when Democrats are complaining that there is no money.

The article posts some examples of spending in recent weeks:

On Monday, VA paid $27,000 for an order of photographs showing sunsets, mountain peaks and country roads. They would go into a new center serving homeless veterans in Los Angeles; a spokeswoman described the art as “motivational and calming, professionally designed to enhance clinical operations.”

On Wednesday, the Coast Guard paid $178,000 for cubicle furniture, replacing high-walled cubes with low-walled ones to improve the air flow in a large office area.

“Other higher-priority projects were not able to be executed, so they moved [money] to this lower-priority project” before the year’s end, said Coast Guard spokesman Carlos Diaz. “The money was going to be spent anyway.”

On Thursday, VA was buying art again. It spent $216,000 on artwork for a facility in Florida. In all, preliminary data showed that the agency made at least 18 percent of all its art purchases for the year in this one week. One-sixth of the buying in one-52nd of the year.

This is not a reasonable system. There is a spreadsheet at adelphi.edu that shows the federal deficit over the years. When President Obama took office, the deficit was approximately 12 million dollars. The deficit is now approaching 17 million dollars. That’s a pretty hefty increase in five years. However, the really interesting part of the spreadsheet is the relationship between the deficit and which party controls the House of Representatives. Remember, the House controls the spending. Please follow the link to the spreadsheet and take a look at the history of the federal deficit.

At any rate–baseline budgeting needs to go.

On Friday, the Daily Caller reported that Harry Reid told reporters that the Senate would not pass a budget this year. Senator Reid did not feel a budget was necessary because he felt that the debt-ceiling agreement already covered that. Never mind that the Senate is constitutionally required to pass a budget.

To add to the confusion, CNS News reported on Friday that the House of Representatives has now passed a bill to eliminate baseline budgeting. Baseline budgeting is the practice that allows Congress to claim it is cutting the budget while it continues to increase spending. This is done by assuming every government agency will have a certain percentage increase every year. If the amount of that increase is cut, it is a considered a spending cut, even though the agency got an actual increase in the amount it could spend. For example, let’s say the Department of Education spent $100 this year. Next year they would automatically get $110. If Congress cut the budget and they were only given $105, that would be considered a budget cut, even though their budget grew.

That is baseline budgeting. That is what the House of Representatives voted to end on Friday. Is anyone willing to make a bet on how far this bill will get in the Senate?