House Democrats told the Supreme Court on Monday they need access to secret grand jury materials because they are still investigating President Donald Trump in connection with Russia “collusion” and may want to impeach him, again.

In a legal filing published by CNN, Democrats said that they need the grand jury materials because the House Judiciary Committee’s impeachment inquiry into Trump’s alleged obstruction of justice in the Russia investigation is ongoing.

Unbelievable. The story belongs in the Babylon Bee, but unfortunately it is real. This needs to be added to the list of reasons to end Democrat control of the House of Representatives in November. I can’t believe this is what Democrat voters voted for.  What have the Democrats accomplished in the House of Representatives in the past two years other than harass the President?

The Democrat-run House seeks “disclosure to the House Committee on the Judiciary of a limited set of grand-jury materials for use in the Committee’s ongoing Presidential impeachment investigation,” the Supreme Court filing says.

The saga began in 2019, when Special Counsel Robert Mueller determined that there had been no collusion between Russia and the Trump campaign. When he released his report, however, Mueller submitted two volumes — one on the collusion investigation, and one on a separate obstruction of justice investigation. Though he made no recommendation for prosecution, Democrats seized on the latter as providing the basis for potentially impeaching Trump for obstruction.

Democrats also claimed that certain redactions in the report must have hidden relevant information — though they declined to read a less redacted version. They also demanded access to material that Mueller had shown a grand jury. Normally grand jury proceedings are secret, and so Attorney General William Barr, citing federal law, declined the Democrats’ request. They then held him in contempt of Congress, and took their case for the materials to federal court.

The case made its way through the courts, and Democrats won at the D.C. Circuit. The Department of Justice appealed to the Supreme Court on May 7, and Chief Justice Roberts put a temporary hold on the grand jury materials on May 8.

In their court filing, the Democrats complain that further delays in the release of the grand jury materials would make it impossible for them to impeach the president again before Congress’s term ends:

Maybe the Democrats should actually try to accomplish something instead of chasing partisan unicorns.

There was a Second Amendment rally in Richmond, Virginia, yesterday. 22,000 Second Amendment supporters showed up on Martin Luther King Day to support the Second Amendment. The media was predicting riots. On Sunday I posted an article based on a Canada Free Press story that predicted a ‘false flag’ operation by Antifa. That did not materialize.

Yesterday John Hinderaker at Power Line Blog posted a few observations about the rally. The headline on his article was, “Pro-Gun Rally In Richmond Is Peaceful; Liberals Hardest Hit.”

Today an estimated (by police) 22,000 people demonstrated at the Virginia capitol in Richmond in favor of Second Amendment rights, which are being threatened by the newly-elected Democratic majority in that state’s legislature. Liberal news outlets were hoping the rally would turn violent, and their disappointment when it didn’t was palpable. 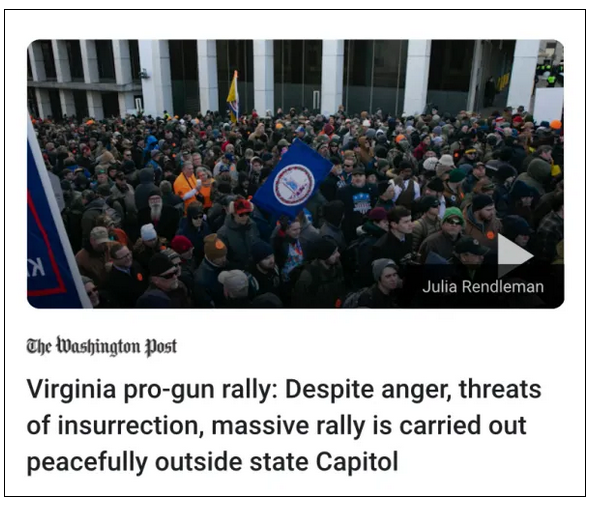 The Babylon Bee probably had the best headline and article:

The Babylon Bee headlines: “Media Offers Thoughts And Prayers That Someone Would Start Some Violence At Gun Rights Rally.”

Somber members of the press offered their thoughts and prayers that someone would start some violence at the gun rights rally in Virginia today.

Reporters expressed their grief and condolences as the violence they hyped has so far failed to materialize.

“Nobody has so much as fired a shot. This is an unbelievable tragedy,” said one teary-eyed MSNBC reporter, clearly caught up in the anguish of the moment.

Antifa threatened to show up at the rally, and likely would have created violence if it had done so. But for some reason, the group’s leaders changed their minds. Maybe they focused on the fact that the 2x4s, pipes and baseball bats with which they are used to beating up innocent bystanders might not fare so well in this crowd. One young guy who looked suspiciously like a leftist advocated jumping the fence and killing people. The genuine demonstrators denounced him as an “infiltrator”–which I suspect he was–and told him to “get the f*** out.”

Virginia’s Democrats are unabashedly in favor of gun confiscation. Why is it that when Democrats take control of a legislative body, they instinctively move to confiscate legally-owned firearms from law-abiding citizens, in violation of the Second Amendment? It would take a psychiatrist to answer that question. Certainly a student of crime statistics wouldn’t be able to explain it. Whatever the cause, the Democrats’ move against the citizens’ constitutional rights is manna from Heaven for Republicans, many of whom mingled with the demonstrators and endorsed their cause.

I would also like to note that those who attended the rally cleaned up after themselves before they left. It is also interesting to me that when so many ‘good people with guns” are in one place, there is no violence.