Unfortunately it appears that the Democrat’s definition of unity is to silence any dissenting views on their policies. The idea of compromise and debate seems to have vanished somewhere in the recent election. This is not the way our country was set up, and many Americans are unhappy with the direction the Democrats are already taking us.

Just the News posted an article yesterday about the approval ratings of some of our Congressional leaders. 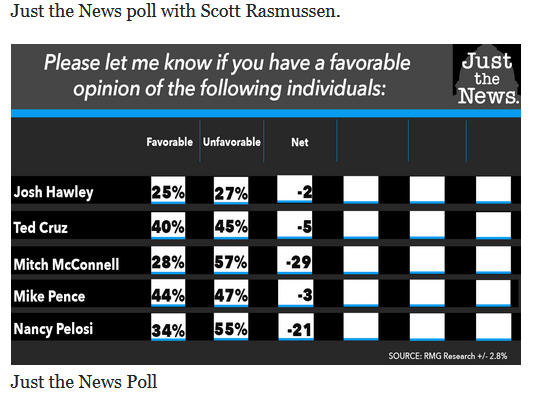 Less than a majority of Republican voters (45%) expressed approval for McConnell, showing a growing divide within the Republican party. Meanwhile, a majority of Democrats (67%) still approve of Pelosi, who was recently elected Speaker of the House by a slender margin.

This survey polled 1,200 registered voters and was conducted by Scott Rasmussen from Jan 7-9, 2021.

The poll’s cross-demographic tabulations can be found here and here.To see the poll’s methodology and sample demographics, click here.

The Republican Party does not easily unify. It is made up of people who do not naturally fall into lock step. There are many Republicans (myself included) who would like to see the Republican Party actually lead instead of sitting back and playing the victim. Mitch McConnell has done a good job of confirming judges, but he has not always been on the President’s team. That is unfortunate because the President is the highest elected official in the Republican Party–he should be considered its leader. It is unfortunate that the Party has not been willing to unite behind him to get things done. Had the members of the Party been willing to take a strong stand, they might have been able to work out an infrastructure bill and get it passed despite the Democrats’ objections. Had the party stuck together instead of playing their ‘never Trump’ games, they might have been able to overcome Democrat resistance to policies that would have moved our country forward. I believe the approval ratings above reflect the frustration of the American people that the two parties have not been able to work together for the good of the country. Based on their actions so far, I don’t see that changing under a new Congress and administration.