Yesterday PJ Media posted an article about President Biden’s plans to get his legislative agenda passed.

Joe Biden is telling Democratic leaders in the House and Senate that he will lean on moderate Democrats in order to force passage of change to the Senate’s filibuster. He will also lobby hard to pass the voting rights bill that Senate Majority Leader Chuck Schumer says he wants to vote on this week.

Biden and the Democrats want a “carve-out” for the electoral power grab known as the “For the People Act.” It would allegedly be a one-time exception to the filibuster and allow for a straight up-or-down vote on the bill, which Democrats mischaracterize as a “voting rights” bill.

Both Senators Joe Manchin and Kyrsten Sinema have publicly come out against altering the filibuster and both have expressed doubts about the voter bill without substantial changes. But Biden apparently believes his powers of persuasion will work on them and other centrist Democrats.

Manchin will be a tough nut for Biden to crack. The West Virginia senator has been adamant about opposing any “tweaks” to the filibuster.

Make no mistake–this is a serious threat to our Republic. The U.S. Constitution specifically states that election policies are left to the states–they are not under the jurisdiction of the federal government. Unfortunately at this time, we have no guarantee that the Supreme Court will uphold the Constitution.

Winning over the two Democrats who’ve declared their opposition to filibuster reform, Sens. Manchin and Sinema, won’t be easy. In April, Manchin wrote in an op-ed that he would not support tweaking or abolishing the filibuster, which he described as a “critical tool” to protect the interests of small and rural states like his. Sinema, for her part, likes to point out how often Democrats used the filibuster when they were in the minority during Donald Trump’s presidency. The filibuster, she wrote in June, “compels moderation and helps protect the country from wild swings between opposing policy poles.”

Yet Sinema has broadly endorsed the need for voting-rights reforms, and Manchin says “inaction is not an option.” Congressional aides and anti-corruption activists who support the For the People Act say Schumer’s strategy has been to give Republicans every opportunity to work with Democrats on a compromise bill, and to allow Manchin the space to lead those negotiations, if only to show that Republicans won’t support any version of pro-democracy reform that Democrats come up with. “We continue to see that the Republicans are not willing to negotiate in good faith on these fundamental issues to protect our democracy,” says Tiffany Muller of End Citizens United.

First of all, we are not a democracy–we are a constitutional republic. If you really want to get to the root of our current political problems, you might want to take a look at the 17th Amendment to the U.S. Constitution. This opened the door for the corruption we currently see–the illegal campaign money, the earmarks, the runaway spending, the power grabs, etc. The election reforms the Democrats want will make it even easier to cheat.

On Monday, The Daily Signal posted an article about President Obama’s legacy. It’s something that the press has not really highlighted.

In President Barack Obama’s second term, the Senate has confirmed more than twice the number of judicial nominees than were confirmed in President George W. Bush’s second term. This is due mostly to the fact that Senate Majority Leader Harry Reid, D-Nev., succeeded in eliminating the filibuster for judicial nominees (excluding the Supreme Court, at least for now) in November 2013..

The chart below illustrates how the elimination of the filibuster has impacted the nomination process: 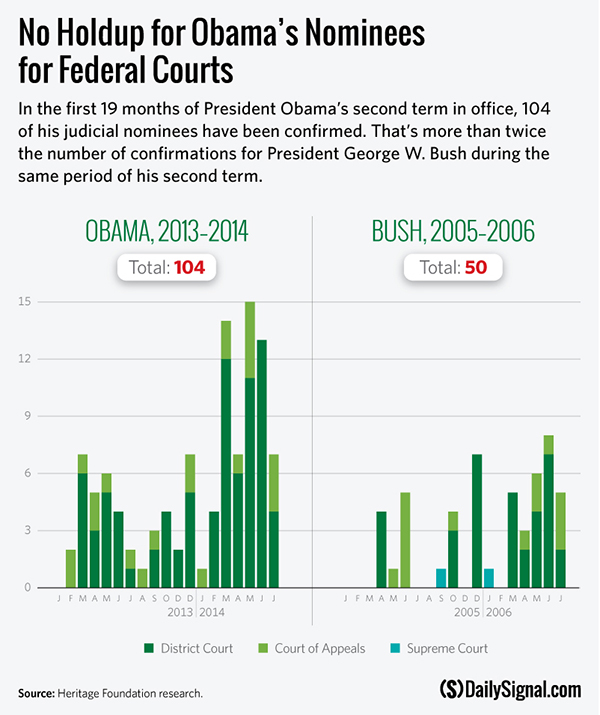 I am not a big supporter of the filibuster, but I am also not a big supporter of stacking the courts with judges with a political bias. That is what has been going on. Since many of the problems with ObamaCare will be decided in the courts, the Obama appointments to the lower courts could easily move America further to the left than Congress would have been able to do. Our Constitution was designed to create a representative republic. The idea was that laws would be made in Congress. People could hold their Congressman accountable and vote him out of office if they did not like the laws he supported. (Actually, that is not totally true. Initially, the House of Representatives was elected by the people, and the Senators were appointed by the state legislatures. In 1913, Congress passed the 17th Amendment, which called for the direct election of Senators. Up until that point, the state legislature could recall their Senator if he was not supporting bills that were in the interest of their state. The direct election of Senators changed the balance of power in the U.S. government and seriously diminished the power of the states against the much larger federal government.) Unfortunately, we have now reached a point where our courts are making laws. As the courts lean left, we may find ourselves living in a country with a very different form of government than what the Founding Fathers envisioned.