CBN News is reporting today that Pastor Youcef Nadarkhani was re-arrested in Iran on Christmas Day. Pastor Nadarkhani has been told that he will have to serve out the remainder of his three-year sentence because he is guilty of the crime of evangelizing Muslims. Iran is governed by Sharia Law, which makes it illegal (and punishable by death) to evangelize Muslims or to preach Christianity. Wishing someone Merry Christmas is considered slander against the prophet Mohammad, and is also punishable by death.

Christian activists worry that Nadarkhani still may not be safe, even if he is released after the 45 days are finished.

“We hope that Pastor Nadarkhani will be released without delay once this alleged sentence has been fully served,” Thomas said. “We are also asking for prayers for the pastor’s safety, and for his family at this difficult time.”

Please pray for the Pastor and while you are at it, thank God for the religious freedom we have in America.

Fox News is reporting today that Iranian Pastor Youcef Nadarkhani has been released from prison in Iran and has been reunited with his family. The Pastor had been in prison for three years on charges of apostasy, which is punishable by death in Iran. The charges were lowered to evangelizing to Muslims, which carries a three-year sentence, and he was released.

…He was released with time served, according to the American Center for Law and Justice, a Washington-based watchdog group that had been campaigning for the pastor’s release.

“Today our sources in Iran reported that Pastor Youcef was acquitted of apostasy and released from prison. After languishing in prison for almost three years, he has been reunited with his family,” Jordan Sekulow, executive director of ACLJ said in a statement to FoxNews.com.

“While we are working on confirming the exact details of his release, some sources report that the court alternatively convicted Pastor Youcef of evangelizing to Muslims, sentencing him to three years and granting him time served.  Pastor Youcef’s story is an example of how the world can join together to ensure that justice is served and freedom preserved.”

I am glad that the Pastor has been released and is home with his family, but we need to look at the overall situation here. Iran is a country governed by Sharia Law. There is no freedom of religion–sharing any faith other than Islam will result in a jail sentence or worse if you are caught. This is a part of Sharia Law. Please keep that in mind as you hear Muslims in America attempt to introduce Sharia Law into American courts.

The article further reminds us:

“While we praise the release of Pastor Youcef, we must recognize that Iran felt obligated to save face among its people and continue its pattern of suppressing religious freedom with intimidation tactics,” Tiffany Barrans, a legal director for ACLJ said to FoxNews.com.

“International attention to this matter saved this man’s life, but we must not forget the human right of freedom of religion includes the right to freedom of expression.”

As Americans, we need to treasure our freedom and work to protect the freedom of people like Pastor Youcef.

On July 8, the Jerusalem Post posted an update on the story of evangelical Pastor Youcef Nadarkhani, who has been in prison in Iran on apostasy charges. July 8, 2012, marked the 1000th day of his time in prison. In Iran, it is a capital crime to convert from Islam to Christianity, and the Iranian government claims that Pastor Nadarkhani was once a Muslim. He has been sentenced to death.

Pastor Nadarkhani is scheduled to appear in an Iranian court again on September 8.

In an email to The Jerusalem Post on Friday, Jordan Sekulow, executive director of the American Center for Law & Justice, wrote, “We have confirmed that Pastor Youcef is scheduled to appear in court on September 8. We do not know the purpose of the appearance or the likelihood of new charges. We want to dispel any rumors that his current apostasy charge, for which he was sentenced to death, has been removed. Until the regime unconditionally exonerates and releases Pastor Youcef, his apostasy charge stands.”

The American Center for Law & Justice (ACLJ) has been the principle advocate of Pastor Nadarkhani’s release. Their hope is that by drawing attention to his imprisonment due to his Christianity, they can obtain his release.

“…Our (AVLJ) global support to free Pastor Youcef continues to grow. Our Tweet for Youcef campaign now reaches more than 2.5 million people a day in more than 220 counties and territories,” Sekulow added.

Pastor Nadarkhani’s attorney, Muhammad Ali Dadkhah, has been sentenced to nine years in prison and barred from practicing law because of his work on behalf of religious liberty.

We need to remember that Iran is a Muslim country governed according to Sharia Law. The death sentence for Pastor Nadarkhani is considered appropriate under Sharia Law. Please remember also that there are those in our government who want to bring Sharia Law to America. At the state appellate court level there have been 50 cases in 23 states where judges admitted using Sharia Law. Our Constitution states that the Constitution is the law of the land. We need to keep that in mind when political leaders ask to interject laws from other countries into our court system at any level. Pastor Nadarkhani’s case is not unusual for any country practicing Sharia Law. We don’t want Sharia law to come to America.

The idea that Islam is a peaceful religion that happily coexists with other religions occasionally seeps into our national dialogue. One example that disproves this idea is the story of Youcef Nadarkhani, a Christian house church pastor facing execution in Iran for leaving Islam. One reporter at CBN.com posted a recent letter from Mr. Nadarkhani. This is the letter:

Greetings from your servant and younger brother in Christ, Youcef Nadarkhani.

To: All those who are concerned and worried about my current situation.

First, I would like to inform all of my beloved brothers and sisters that I am in perfect health in the flesh and spirit. And I try to have a little different approach from others to these days, and consider it as the day of exam and trial of my faith. And during these days which are hard in order to prove your loyalty and sincerity to God, I am trying to do the best in my power to stay right with what I have learned from God’s commandments.

I need to remind my beloveds, though my trial due has been so long, and as in the flesh I wish these days to end, yet I have surrendered myself to God’s will.

I am neither a political person nor do I know about political complicity, but I know that while there are many things in common between different cultures, there are also differences between these cultures around the world which can result in criticism, which most of the times response to this criticisms will be harsh and as a result will lengthen our problems.

From time to time I am informed about the news which is spreading in the media about my current situation, for instance being supported by various churches and famous politicians who have asked for my release, or campaigns and human rights activities which are going on against the charges which are applied to me. I do believe that these kind of activities can be very helpful in order to reach freedom, and respecting human rights in a right way can bring forth positive results.

I want to appreciate all those are trying to reach this goal. But at the other hand, I’d like to announce my disagreement with the insulting activities which cause stress and trouble, which unfortunately are done with the justification (excuse) of defending human rights and freedom, for the results are so clear and obvious for me.

I try to be humble and obedient to those who are in power, obedience to those in authority which God has granted to the officials of my country, and pray for them to rule the country according to the will of God and be successful in doing this. For I know in this way I have obeyed God’s word. I try to obey along with those whom I see in a common situation with me. They never had any complaint, but just let the power of God be manifested in their lives, and though sometimes we read that they have used this right to defend themselves, for they had this right, I am not an exception as well and have used all possibilities and so forth and am waiting for the final result.

So I ask all the beloved ones to pray for me as the holy word has said. At the end I hope my freedom will be prepared as soon as possible, as the authorities of my country will do with free will according to their law and commandments which are answerable to.

May God’s Grace and Mercy be upon you now and forever. Amen.

All of us need to be grateful for our freedom and pray that this man regains his freedom and is reunited with his family.

Yesterday the International Business Times reported that Christian Pastor Youcef Nadarkhani, who is facing the death penalty in Iran, is actually being charged with rape–not apostasy.

However, the article reports:

However, a December 2010 court ruling issued and signed by Supreme Court judges Morteza Fazel and Azizoallah Razaghi mentions the religious charges against Nadarkhani and nothing more.

What has happened here is that the world has noticed that Pastor Nadarkhani was facing the death penalty for apostasy and has begun to question the Iranian record on human rights.

As the case slowly garners international attention, the rape allegation is a signal that Nadarkhani has become, to put it bluntly, a public relations disaster for Iran.

In what could prove to be Nadarkhani’s last days, world leaders have finally condemned the death sentence and pushed for the pastor’s release.

There is no doubt in my mind that this is a made-up charge. Hopefully the civilized nations of the world can put enough pressure on the Iranian government to prevent the execution of an innocent man. 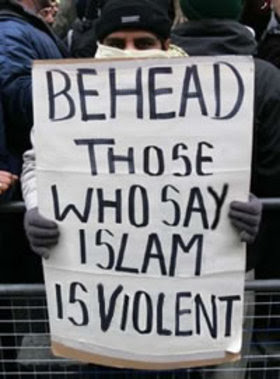