On Saturday, Breitbart posted an article quoting Walter Williams on the new gun registration measures being instituted in Virginia. Walter Williams is a columnist and a George Mason economics Professor.

On December 10, 2019, Breitbart News reported that Northam changed his position from supporting an across-the-board ban on possession of such weapons to supporting a ban only in a situation where a person refuses to register the firearm with the government. The Virginia Mercury quoted Northam spokeswoman Alena Yarmosky saying, “The governor’s assault weapons ban will include a grandfather clause for individuals who already own assault weapons, with the requirement they register their weapons before the end of a designated grace period.”

On December 27, 2019, Walter E. Williams used a Fox News op-ed to warn Virginians “not to fall for the registration trick.” He said, “Knowing who owns what weapons is the first step to confiscation.”

In the article, Walter Williams quoted James Madison in Federalist Paper No. 46:

James Madison, in Federalist Paper No. 46 wrote that the Constitution preserves “the advantage of being armed, which the Americans possess over the people of almost every other nation … (where) the governments are afraid to trust the people with arms.”

Thomas Jefferson wrote: “What country can preserve its liberties if its rulers are not warned from time to time that their people preserve the spirit of resistance? Let them take arms.”

Too many Americans believe the Second Amendment grants Americans the right to own firearms only to go hunting and for self-protection. The framers of our Constitution had no such intent in mind.

Eighty-six of Virginia’s 95 counties have declared themselves Second Amendment Sanctuaries in which future gun controls passed by Northam and his Democrat colleagues will not be enforced.

Walter Williams, a professor of economics at George Mason University, posted an article at The Daily Wire today about taxes.

Professor Williams noted a few things about taxes in America:

The argument that tax cuts reduce federal revenues can be disposed of quite easily. According to the Congressional Budget Office, revenues from federal income taxes were $76 billion higher in the first half of this year than they were in the first half of 2017. The Treasury Department says it expects that federal revenues will continue to exceed last year’s for the rest of 2018. Despite record federal revenues, 2018 will see a massive deficit, perhaps topping $1 trillion. Our massive deficit is a result not of tax cuts but of profligate congressional spending that outruns rising tax revenues. Grossly false statements about tax cuts’ reducing revenue should be put to rest in the wake of federal revenue increases seen with tax cuts during the Kennedy, Reagan and Trump administrations.

A very disturbing and mostly ignored issue is how absence of skin in the game negatively impacts the political arena. It turns out that 45 percent of American households, nearly 78 million individuals, have no federal income tax obligation. That poses a serious political problem. Americans with no federal income tax obligation become natural constituencies for big-spending politicians. After all, if one doesn’t pay federal income taxes, what does he care about big spending? Also, if one doesn’t pay federal taxes, why should he be happy about a tax cut? What’s in it for him? In fact, those with no skin in the game might see tax cuts as a threat to their handout programs.  (The underline is mine.)

The above information might explain why Democrats keep getting elected despite their overtaxation and reckless spending (yes, I know the Republicans also overspend).

Another part of the Trump tax cuts was with corporate income — lowering the rate from 35 percent to 21 percent. That, too, has been condemned by the left as a tax cut for the rich. But corporations do not pay taxes. Why? Corporations are legal fictions. Only people pay taxes. If a tax is levied on a corporation, it will have one or more of the following responses in order to remain in business. It will raise the price of its product, lower its dividends to shareholders and/or lay off workers. Thus, only flesh-and-blood people pay taxes. We can think of corporations as tax collectors. Politicians love our ignorance about this. They suggest that corporations, not people, will be taxed. Here’s how to see through this charade: Suppose a politician told you, as a homeowner, “I’m not going to tax you. I’m going to tax your land.” I hope you wouldn’t fall for that jive. Land doesn’t pay taxes.

Getting back to skin in the game, sometimes I wonder whether one should be allowed in the game if he doesn’t have any skin in it.

It’s time to insure that everyone has some tax burden so that they will consider that burden when they vote. 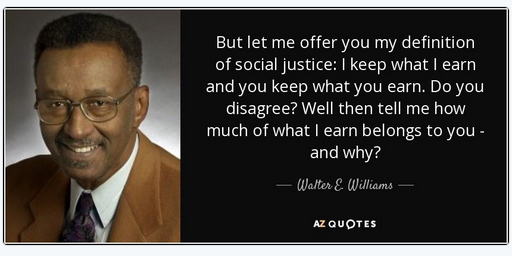