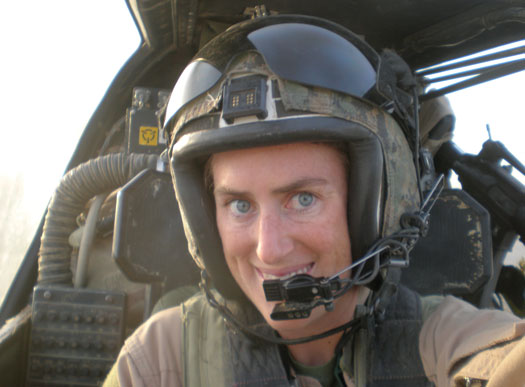 Ky Hunter served in the Marine Corps. She was a Cobra pilot during the Iraq War. When I first met her a number of years ago, I asked her how that was possible since as far as I knew women were not in combat. She answered, “I wasn’t in combat, I was a few hundred feet up and a few hundred feet back.” I loved her answer, and I respect her views on the subject. She posted the following on her blog, welcometokylandblogspot.com yesterday:

Those Who Should, Will

Secretary Panetta lifted the ban on women on combat roles.  The Washington Post calls this a “watershed policy change that was informed by women’s valor in Iraq and Afghanistan and that removes the remaining barrier to a fully inclusive military.”
Given my time spent as an AH-1W pilot in the Marine Corps, my phone, email, Facebook, twitter, etc has been bombarded with questions about how I feel about this.  So rather than answer everyone individually, below, I wrap up all question and give my response.
First, a disclaimer.  I am no longer in the Marine Corps.  The views, idea, feeling, rants, offensive comments, off color remarks, or general pissyness are mine and mine alone.  They do not reflect the the views of the Corps, or University of Denver.  So, with that aside, here I go.
Historically, the central question of the women in combat debate has been “are women physically capable of performing the duties required for combat?” This question is quickly and easily answered.  Objectively, women are increasingly proving themselves as physically capable as men.  In both endurance events and tests of strength-to-weight, women are evening the playing field and living up to what has been thought of as “mens standards.”  Women have also proven themselves tactically as capable as men in all objectively measurable fields.
If these objective standards – how fast one can run, how much one can lift, how well one can shoot – were the only indicators of success in combat there would be no argument or debate; those meeting the standard would be inarguably successful.  However, success in combat units is determined by more than just objective abilities, and thus the debate deepens. It is universally accepted that the safety and success of our military units is paramount.  It is for this reason that I believe the debate needs to shift away from “are women capable” of serving to “are women a value added”.   This changes the argument from “can or cannot” to “should or should not”; a question that needs to be addressed top-down rather than bottom-up.
Throughout the last decade-plus of the United States’ involvement in the conflicts encompassing the Global War on Terror, there is no arguing that women have found themselves “in combat situations.”  In these situations, women have shown valor, strength, leadership, fortitude, and upheld the values of honor, courage and commitment.  Many have given the ultimate sacrifice, and each and every one of them deserves a place in history and our hearts as a true hero.
But being “in combat situations” is not the same as being a “combatant.”  Combatants are offensive.  Their mission is to close with and destroy the enemy.  They seek engagement.  Their primary purpose is to assert superiority over an enemy force.
Having the technical and tactical skill to react properly when coming under fire during the performance of primary duties – whether it be an ambushed logistics patrol, FET team patrol, or MP checkpoint attack – provides a foundation of knowledge and experience necessary for the argument supporting a woman’s ability to be in combat.  However, mastery of this baseline alone does not necessarily equate to success of a woman in the role of a combatant.
Successful combat units are a product of the intangible – the fabled esprit de corps – as much as technical and tactical proficiency.  This elusive intangible cannot be “trained in” to a recruit.  It cannot be taught in infantry school.  No amount of extra pushups, remedial weapons training or nights in the field ensure that it exists.
Women are just as capable as men of developing the necessary esprit de corps.  But it cannot be forced.  I hope that in implementing these changes, no arbitrary timelines are put in place.  If it takes 2 weeks, 2 months, 2 years or 2 decades for the right women to come into combat roles, so be it.  The US military is an all-volunteer force, and to respect that tradition, combat roles must be volunteer.  Quota systems will only set the work of every woman who has served back, by making light of the sacrifices involved in paving the paths they did.
I have the upmost trust that the DoD will set standards appropriately.  And I sincerely hope that the civilian oversight and general population will let this change grow organically and fruitfully, while respecting the grave responsibility for life given to each member of the US military.

I can say from experience that the road for these women will not be easy.  I have chronicled much of my coming to grips with what my experience and service mean.  But I know that I, and all my sisters in arms, are more than capable to serve in all roles necessary for defense of this great nation.  Yet it will not be easy.  And hopefully the public will understand that in such a situation we all must be patient for the women who should emerge to lead our sons and daughters in arms, and not force them in their time.