I am very glad that I am no longer raising children. Keeping track of their social media, internet use, and entertainment choices would give me more gray hair than I already have. However, even as a grandparent, I need to remember that generally speaking, the entertainment industry is working against the morals that most of us tried to teach our children. Gone are the days of the good guys winning and those who played the good guys serving in the military and staying married to the same person. The teenage idols our children look up to today are more than a little scary to those of us who are early baby boomers. Today’s teenage idols make Elvis and the Beatles look like choir boys.

So where am I going with this? I have said before that I think Disney has been taken over by radical feminists who love special effects. A number of recent Disney movies confirmed that suspicion. Now we have further evidence of the entertainment industry being used to shape our children’s values.

An article posted at Townhall yesterday included the following:

Planned Parenthood Keystone published (and later deleted) an inflammatory tweet advocating for several Disney princess characters that it claimed “we need.” Although conservative parents who wish to shield their young children from media propaganda promoting ideas like abortion and transgender ideology would likely disagree.

The list of princesses proposed by Planned Parenthood Keystone included a princess who has undergone an abortion, a transgender princess and others. 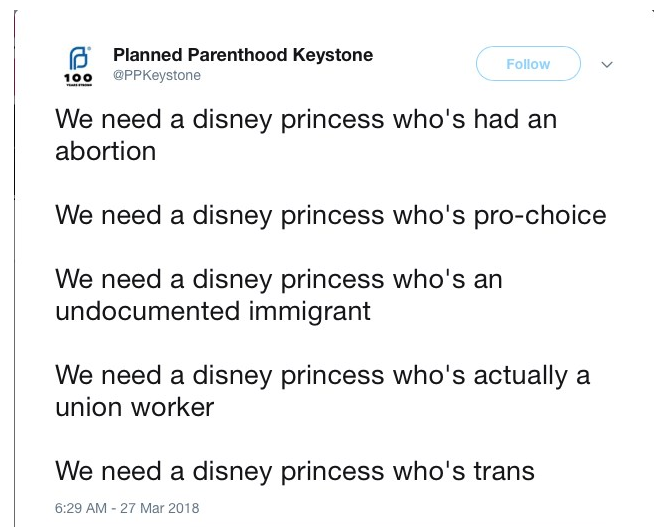 Does anyone else fondly remember the days of Annette Funicello?

This seems trivial, but maybe it’s not. MyWay News is reporting today that Paul McCartney is giving up smoking pot.

The former Beatle told the Daily Mirror he doesn’t want to set a bad example for his children and grandchildren by using marijuana. He said Saturday his decision is “a parent thing.”

He says “the last time I smoked was a long time ago.”

It is interesting to me that someone who smoked pot for a long time does not want his children and grandchildren smoking it. It’s a very interesting statement for him to make. Paul McCartney’s actions are in stark contrast to the move in America to legalize marijuana. I wonder if this is the real answer to America’s drug problem–just convince the grown-ups to act like grown-ups.