Former Democratic House Speaker Tip O’Neill is credited with saying, “All politics is local.” I think that fact is partially responsible for the victory of Republican Karen Handel over Democrat Jon Ossoff in Tuesday’s special election in Georgia.

This was the most expensive U.S. House of Representatives race in American history. For those people screaming that we need to get the money out of politics, here are some numbers from an article posted at Hot Air today. As of the end of May, Republican Karen Handel had spent $3.2M. Democrat Jon Ossoff had spent $22.5M. Obviously this election was not for sale.

To add irony and a touch of chutzpah to this:

MARTIN: How do you feel about the money that’s been spent on this campaign? The Atlanta Journal Constitution published a calculation that said you and your opponent have spent or reserved over $40 million for TV and radio ads. Does that disturb you? What does it say about our political culture?

OSSOFF: The role of money in politics is a major problem and particularly the role of unchecked anonymous money. There have been super PACs in Washington who have been putting up tens of millions of dollars of attack ads in air for months now. When you have that kind of an environment, it’s necessary to raise the resources to fight back. I’m proud of the fact that my campaign has raised that money in small-dollar contributions, on average less than $50.

MARTIN: Although, it was your party that started the big spending. The Atlanta Journal Constitution also found your campaign and groups supporting it spent about $2 million more in ad spending than Handel during the runoff.

OSSOFF: Well, the overwhelming majority of money spent supporting my opponent has come from super PACs in Washington. And the overwhelming amount of money that’s been spent supporting my candidacy has come from small-dollar donors. But there’s no question that money in politics is a major problem, which is one of the reasons that we need campaign finance reform so that candidates and campaigns will spend more time talking to voters and discussing the issues and less time raising money.

On Friday, The Daily Caller reported:

Only about 3.5 percent of Ossoff’s $15 million reported fundraising total came from within Georgia, according the Atlanta Journal Constitution. More than 14 percent came from California and New York.

Here are some of my observations on the election. The mainstream media again had it wrong–they predicted a much closer race or a victory for Jon Ossoff. The money in the election was not the determining factor–the voters looked at the candidates and made their choice according to what they knew. The media has totally lost contact with the voters–they have no idea what the pulse of America is.

The picture below sums up last night: 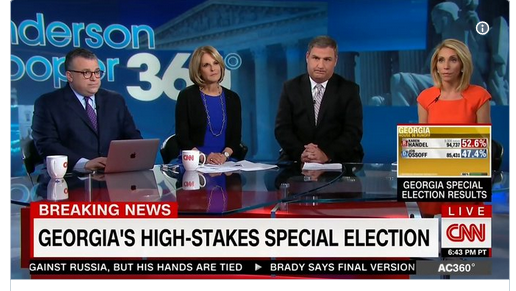 By now we have all heard the story of Matthew Lasner and his husband, who were removed from a JetBlue flight for harassing Ivanka Trump. However, I doubt that you have heard the entire story. A website I am an unfamiliar with, Heavy.com, posted details of some information I have seen referred to elsewhere.

The intention here was to harass another passenger on the plane. How noble. It gets even worse. According to Heavy.com, and other sources, Mr.. Lasner is a professor at Hunter College. What kind of example is he setting for his students? What is he teaching his students? According to the article, Matthew Lasner is married to Daniel Goldstein, a New York Attorney. Mr. Goldstein was holding their child as he was yelling at Ivanka Trump. Great example to set for your child.

The Washington Examiner also carried the story yesterday, noting that it had been sanitized in the mainstream media.

Lasner later deleted the tweets, and he appears to have suspended his Twitter account altogether following the incident.

JetBlue later put out a statement reading, “The decision to remove a customer from a flight is not taken lightly. If the crew determines that a customer is causing conflict on the aircraft, the customer will be asked to deplane, especially if the crew feels the situation runs the risk of escalation during flight. In this instance, our team worked to re-accommodate the party on the next available flight.”

I would not have been so accommodating.

Some of the mainstream media reports of the incident are included in The Washington Examiner article:

From the Associated Press: “Man says he and husband removed from JetBlue flight after ‘expressing displeasure’ that Ivanka Trump was aboard.”

From Yahoo News: “Man kicked off JetBlue flight for questioning why Ivanka Trump was on it.”

From the Atlanta Journal Constitution: “Passengers kicked off flight after run-in with Ivanka Trump.”

From the Washington Post: “Passenger who confronted Ivanka Trump gets kicked off Jet Blue flight.”

I can’t remember anyone ever doing anything similar to any of the Obama family members when they were out in the public–the girls at concerts or shopping. This is disgraceful. There need to be serious consequences for this sort of behavior. You can disagree with anyone politically for any reason, but you do not have the right to harass them or their family.