Taylor Force was an American who was stabbed to death in 2016 while visiting Israel. He was a former U.S. Army officer who was part of a Vanderbilt University tour group visiting the country.

On February 16th of this year, Mr. Lamborn [Congressman Doug Lamborn] (for himself and Mr. Zeldin [Representative Lee Zeldin]) introduced the following bill; which was referred to the Committee on Foreign Affairs (H.R. 1164): 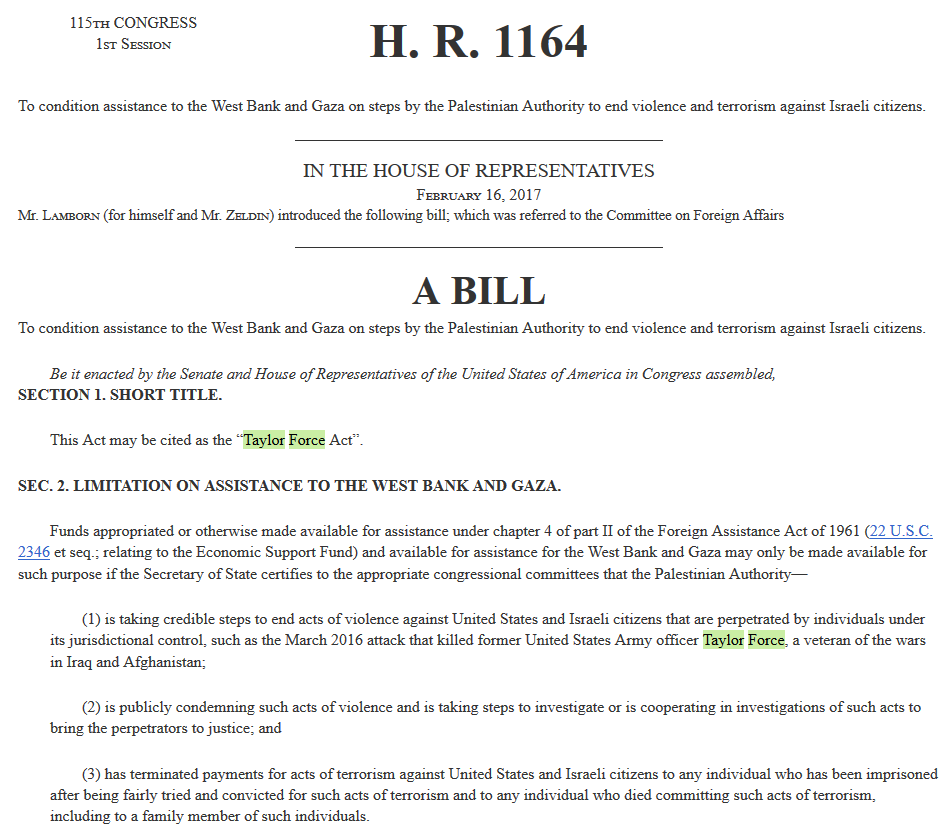 On September 28th of last year, Mr. Graham (for himself, Mr. Coats, Mr. Blunt, Mr. Rubio, Mr. Kirk, Mr. Cotton, Mr. Boozman, Mr. Cruz, and Mr. Scott) introduced the following bill; which was read twice and referred to the Committee on Foreign Relations (S. 3414). The Senate Bill and the House Bill are the same. So what is this about?

CUFI has posted the following:

Since September of 2015, the beginning of the so-called “stabbing intifada,” Palestinian terrorists have murdered more than 50 innocent people and wounded hundreds more.

Sen. Lindsey Graham re-introduced a critical piece of legislation — The Taylor Force Act. Representatives Lamborn and Zeldin introduced similar legislation in the House of Representatives. This bill requires that we cut all U.S. aid to the PA until it stops funding terrorism.

This bill is named after Taylor Force, a West Point graduate who survived tours of duty in Iraq and Afghanistan only to be murdered in Israel by a Palestinian terrorist.

The plaintiffs, some of whom have been victims of Palestinian terrorism, “are fearful that the money that is going to the Palestinian Authority eventually winds up in the hands of the terrorist organizations that can be facilitated to carry out attacks against them,” Nitsana Darshan-Leitner, the director of the Shurat HaDin Israel Law Center and one of the lawyers on the case, told The Daily Caller. “So they find themselves in a very weird situation where their tax money is going actually to attacks against them,” she added.

The Obama administration, not surprisingly, has filed a motion to dismiss the lawsuit.  It argued that the plaintiffs do not have legal standing to bring the suit – i.e., they did not suffer direct personal injury traceable to the actions alleged to be illegal. The Obama administration also argued that the courts have no business getting involved in foreign policy decisions that are inherently “political questions.” These are nothing more than pretextual arguments to prevent discovery of the truth whether the Obama administration is violating express congressional conditions on the granting of aid to the Palestinian Authority and for the West Bank and Gaza.

American foreign aid has been funding terrorism for a while. It will be interesting to watch the fate of the House and Senate bills that are trying to end this practice.