Hot Air posted a very interesting article today on climate change. There is a theory from the University of Wisconsin that was included in the journal Nature.

The article quotes a press release from the University of Wisconsin:

Using evidence from alternating layers of limestone and shale laid down over millions of years in a shallow North American seaway at the time dinosaurs held sway on Earth, the team led by UW–Madison Professor of Geoscience Stephen Meyers and Northwestern University Professor of Earth and Planetary Sciences Brad Sageman discovered the 87 million-year-old signature of a “resonance transition” between Mars and Earth. A resonance transition is the consequence of the “butterfly effect” in chaos theory. It plays on the idea that small changes in the initial conditions of a nonlinear system can have large effects over time.

In the context of the solar system, the phenomenon occurs when two orbiting bodies periodically tug at one another, as occurs when a planet in its track around the sun passes in relative proximity to another planet in its own orbit. These small but regular ticks in a planet’s orbit can exert big changes on the location and orientation of a planet on its axis relative to the sun and, accordingly, change the amount of solar radiation a planet receives over a given area. Where and how much solar radiation a planet gets is a key driver of climate. 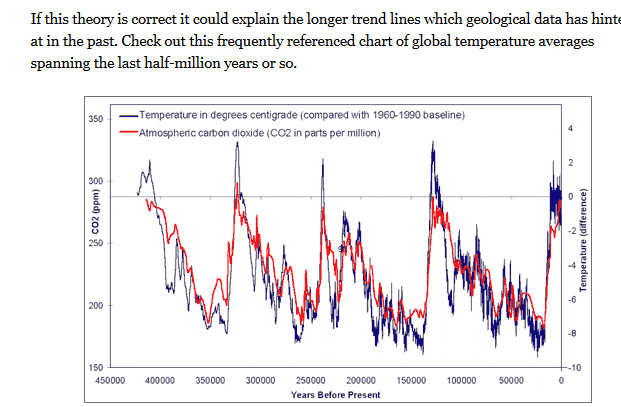 There is no doubt that the climate has gone through various changes over the centuries. We need to have a serious apolitical discussion about climate change to see if we have the power to influence or prevent it (or if we want to prevent it). This new information should be part of the discussion. This also might explain the period of global warming during the Middle Ages which was obviously not caused by carbon emissions.