I watched a portion of the hearings about January 6th yesterday. It was high drama and very little truth. I am sorry that the police and the congressmen were so traumatized by unarmed citizens after the Capitol police waved those citizens into the building (there is video evidence of this). The hearings were a sad reflection of the political left trying to paint opposing views as dangerous. What happened on January 5th was inexcusable, but it wasn’t an insurrection–insurrections involve guns and violence (much like what we saw in major cities last summer). The only person killed was an unarmed civilian. That needs to be investigated, but the politically biased hearings that are taking place will never investigate that.

Yesterday Red State posted an article about the lies told in the hearings. 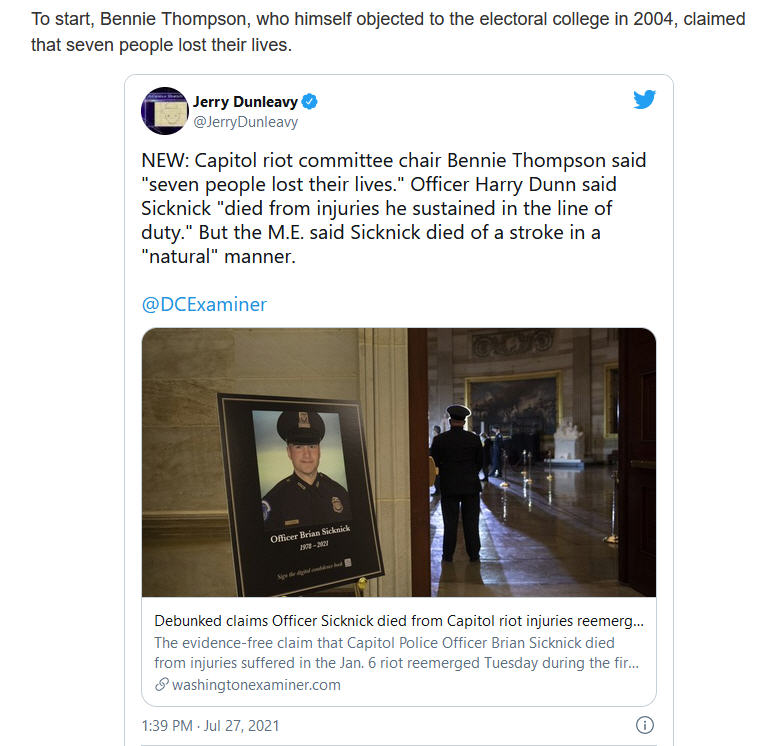 Actually, if we are going to use the broad rubric that Thompson is using, thousands of people lost their lives for a variety of different reasons across the country. Regardless, only one was a direct result of something done at the Capitol that day. That would be Ashli Babbitt, who was shot and killed by an unidentified police officer. No, Officer Brian Sicknick did not die of injuries he sustained in the line of duty. He died a day later of a stroke he suffered nearly 12 hours after the events of January 6th. That is not in dispute. Any connection to January 6th is purely speculative, and in no other situation do we blame the deaths of officers who die of natural causes on stress endured while on duty. That’s not how any of this works.

Thompson is also lumping in two officers who later committed suicide despite there being no direct evidence whatsoever that their decisions were based on January 6th. All the other deaths in the “seven” mentioned were of natural causes.

Then there was the claim that January 6th was the worst attack on the Capitol since 1812.

…Further, the Capitol building has been bombed numerous times throughout its history, resulting in extensive damage. The idea that the meandering trespassers of January 6th represented a greater threat than literally being shot or blown up does not pass muster. It’s the kind of claim a hysteric makes without regard for the facts.

Officer Harry Dunn also used the analogy of a hitman in an attempt to link President Trump to what happened at the Capitol. That is also a false charge.

A lot of things happened on January 6th. What did not happen is a hitman directly ordering people to attack the Capitol, in this case, Donald Trump. During his speech, Trump specifically asked people to peacefully protest. That some of the protesters didn’t is ultimately on them for choosing not to listen. We have agency in this country, and people are responsible for their own actions.

America didn’t used to have show trials. This is one. It does not portend good things for the future of the country.