Yesterday a group of people connected to the Coastal Carolina Taxpayers’ Association (CCTA) went up to Raleigh to talk to our legislators. Below is a picture we took with Senator Lazzara. 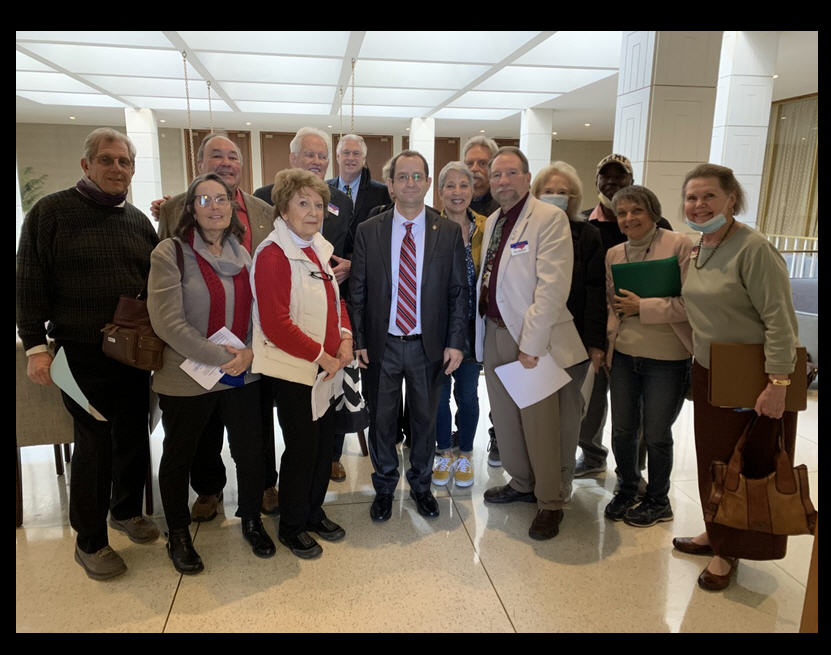 We visited a number of Representatives and Senators from eastern North Carolina. We also sat in the gallery and watched a session of the House of Representatives. The two main issues we asked our legislators about were election integrity and education. There are a number of simple steps that can be taken in North Carolina to protect the integrity of our elections. These were discussed with our lawmakers. It is also time to bring our children back into the classroom. Remote learning has failed too many children and left them depressed and behind their grade levels. One of the bills passed in the House of Representative yesterday would establish an optional six-week summer program that would give students a chance to make up for some of the time missed. Eastern North Carolina students have lost a lot of school in the past three years not only because of the Covid virus, but also because of Hurricane Florence. We need to do everything we can to help them redeem that time.

I just want to remind everyone that anyone can visit our state legislators when they are in session. They are constantly visited by lobbyists, and we the people need to make sure our voices are also heard. CCTA visits Raleigh periodically and invites all interested citizens to come along. If you think you might be interested in coming with us in the future, please send an email to Raynor@cctaxpayers.com. We would love to have you along.

This is the report from the meeting from one of the attendees:

…the meeting room was very crowded.  It was also hot, and uncomfortable.  CCTA’s Common Core Committee with Kim Fink, our Chairman, was in attendance.

Unfortunately, it appeared to us that the review committee had been stacked with supporters of Common Core, although it was clear that some of the members definitely want the standards adopted to be North Carolina Standards.  Senator Jerry Tillman made an impassioned statement that the US Constitution left eduction to the people and the States by not directly allocating authority for education to the federal government.  He also said that the “bar must be raised” because NC’s children need to compete in national and world economies and that our top quarter of school graduates were not fairing well in competition with other states and the rest of the world.

Senator Tillman said the General Assembly would not stand for a re-hash of Common Core, but expected the review committee to do its job and develop North Carolina Education Standards which he said would drive curriculum, something proponents of Common Core deny.

Representative Speciale spoke first. He talked about the need for the conservatives in the state legislature to stand for their principles. He reminded us that he was sent to Raleigh to vote for conservative principles and for what was best for the State of North Carolina. Recently H.B. 1224 was defeated by a 54 to 47 vote. The bill included special interest spending that was not necessary, and needed to be voted down, despite the fact that many Republicans supported it.

Senator Sanderson reminded us that the reports in the press of disunity in Raleigh have been exaggerated. He stated that the Senate and the House agreed on about 95 percent of the budget. About 5 percent of the budget required compromise to work out differences, which the legislature did. Senator Sanderson listed the recent accomplishments of the legislature. These accomplishments included expanded restrictions on sex offenders, rules regarding mo-peds on North Carolina highways, allowing prayer in North Carolina schools, election laws designed to protect the integrity of elections in North Carolina, and energy laws to allow North Carolina to develop its energy resources.

There was an extended period of questions from those who attended the meeting. A variety of subjects were addressed that concern those of us who live in eastern North Carolina–education funding, Common Core, the tourism industry, the fishing industry, and other issues.

The evening was very informative. The meeting was sponsored by the Coastal Carolina Taxpayers Association (CCTA). The CCTA meets at Stanly Hall on the third Tuesday of every month at 7 pm. Attending a CCTA meeting is a good start in becoming an informed voter.

In November of this year, North Carolina voters will be asked to vote on an amendment to the North Carolina Constitution that would allow a person to forgo their right to a Superior Court trial by jury. At first glace this sounds like a great idea–it would help loosen the log jam that is in our courts and it would keep the flow of cases in our court system moving quickly. But what would it do to the rights of North Carolina residents?

The Sun Journal posted an article about this amendment on March 23. The article pointed out that State Representative Michael Speciale, R-Craven, was the only member of the North Carolina House of Representatives to vote against putting this on the ballot.

The article lists some of Representative Speciale’s reasons for his vote:

The question on the ballot, for which voters will pick “yes” or “no,” will read: “Constitutional amendment providing that a person accused of any criminal offense for which the state is not seeking a sentence of death in Superior Court may, in writing or on the record in court and with the consent of the trial judge, waive the person’s right to a trial by jury.”

He said “The title of the bill SB399 is ‘An act to amend the constitution to provide that a person accused of any criminal offense in Superior Court for which the state is not seeking a sentence of death may waive the right to trial by jury and instead be tried by a judge.’”

…Speciale said, “The government is already taking our rights away; the last thing we need to do is give them up willingly. There is nothing good about it for the American citizen. A person could be coerced into signing by being held in nastier circumstances or being told that ‘if you don’t sign, a jury is going to convict you and send you a way for a long time.’”

He added: “This was one of the last bills passed in a flurry of bills and I’ve talked to people at a couple of organizations — Civitas and John Locke Foundation — who weren’t aware of it. They are looking at it and will get back to me. I just want to get word out that this is coming.”

What are the unintended consequences of passing this bill? Unfortunately this bill will result in a two-tiered justice system. Most of us ordinary citizens do not have an in-depth understanding of how our justice system works (I include myself in that category). Most of us do not have a high-powered lawyer that we can call if we are ever accused of a serious crime–we would have to rely on a public defender. Chances are that the public defender would ask us to waive our right to a jury trial–it would help with the overload of court cases and it would help with his workload. It is also quite possible that we might be under pressure from the court to waive the right to a jury trial. If we were in a high income bracket, we would have a different story–our high-powered lawyer would take us to trial and probably win the case. So what this bill will actually do is create a quickie justice system for the average American that may or may not be fair and a more precise justice system for the wealthier than average American. That is absolutely not what America is about.

Please keep your eyes open for more about SB399. I suspect that as we near the November election more information about this amendment will come out and people will begin to see the problems with it. Meanwhile, Michael Speciale will be making the rounds to do his part in informing the voters of North Carolina what this amendment would mean to all of us.

CBN News reported today that Love Wins Ministries, a ministry that serves breakfast to homeless people in a downtown part in Raleigh, North Carolina, has been banned from handing out food.

Rev. Hugh Hollowell, the group’s leader had to explain to 70 people standing in line on Saturday that he could not feed them without being arrested.

The police were enforcing a city ordinance that bans the distribution of food in any of the city’s parks.

Love Wins had permission to set up on the sidewalk as long as they didn’t block it and cleaned up after themselves. Now they will need to get a permit that costs $800 a day.

The city ordinance will be discussed Wednesday in town hall.

I understand that the city might not want to encourage homelessness, but the fact is that homelessness is already here. I would think that the city would appreciate the fact that Love Wins is engaged in feeding the homeless–helping the city in that effort. Hopefully on Wednesday common sense will prevail.