Yesterday the U.K. Daily Mail reported that Saudi Arabia had shot down a missile from Yemen aimed at one of the kingdom’s major international airports on the outskirts of Riyadh.

This is a map showing the geographical relationship between Saudi Arabia and Yemen: 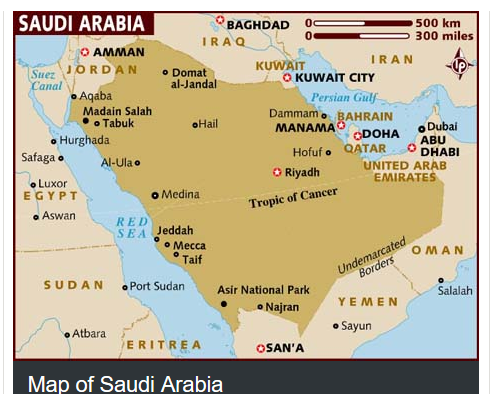 Saudi Arabia said its forces intercepted a ballistic missile fired by Iran-backed rebels in Yemen toward one of the kingdom’s major international airports on the outskirts of Riyadh.

A Saudi-led coalition launched a war against the Houthi rebels and their allies in March 2015 that grinds on today, a campaign overseeing by Crown Prince Mohammed.

The conflict between Iran and Saudi Arabia is an expression of the Sunni vs. Shiite conflict. Both the Sunnis and the Shiites want a caliphate reminiscent of the Ottoman Empire covering the Middle East. The dispute is over who will lead it–the Sunnis or the Shiites.

Only hours before the missile was shout out of the sky, Lebanese prime minister Saad Hariri resigned from his post in a televised address from Riyadh, offering a vicious tirade against Iran and its Lebanese proxy Hezbollah group for what he said was their meddling in Arab affairs.

‘Iran’s arms in the region will be cut off,’ Hariri said.

Yemen, Saudi Arabia’s southern neighbour, has been ripped apart by a war between the Saudi-backed government of president Abedrabbo Mansour Hadi and Huthi rebels backed by Iran.

A Saudi-led coalition became involved in 2015 to help prop up Hadi’s government after Shiite Huthis seized the capital Sanaa.

The missile was knocked down by the Patriot missile system that the Saudis bought from America.