Education First posted an article on November 16th about some of the money funding what is being taught in our schools.

Last week, it emerged that North Carolina Attorney General Josh Stein is threatening to transfer $1.7 billion of taxpayer dollars from the state’s general fund to the Department of Public Instruction. The money would go to implement reccomendations from a report drafted by consultants.

People wondered where the $2 million to fund the report came from. In analyzing all the details, it became evident that the Leftist agenda and Critical Race Theory (CRT) were at the core of this development.

WestEd, a San Francisco-based educational consulting company, produced the Leandro report to suggest ways the state could comform to Supreme Court ruling in Leandro v. State. WestEd claims to be a nonpartisan organization, however it trains schools and districts on ways to implement CRT and SEL programs. The group has a cooperative agreement with the U.S. Department of Education and CASEL to promote SEL in schools across America.

The article notes the source of the funding for the report:

WRAL reports that the far-left Belk Foundation and Z. Smith Reynolds helped fund the WestEd report, but that the Goodnight Foundation was the largest private donor.

Jim Goodnight is the founder and CEO of SAS, a global analytics software company based in Cary. Goodnight is a billionaire with an oversized influence in the state’s education policy, because of his equally oversized donations to politicians.

The article also mentions the campaign donations made by Mr. Goodnight. It seems as if Mr. Goodnight is working hard to buy his seat at the table rather than have the ideas he espouses stand on their own merit.

Please follow the link above to read the entire article. The recommendations on the study named are not things we want to add to our education system in North Carolina.

Roy Cooper is the North Carolina Democratic Attorney General who is running for governor in November. However, it appears that some of his campaign donations are in direct conflict with his current job as Attorney General.

The Beaufort County Now posted the following graphic on Thursday: 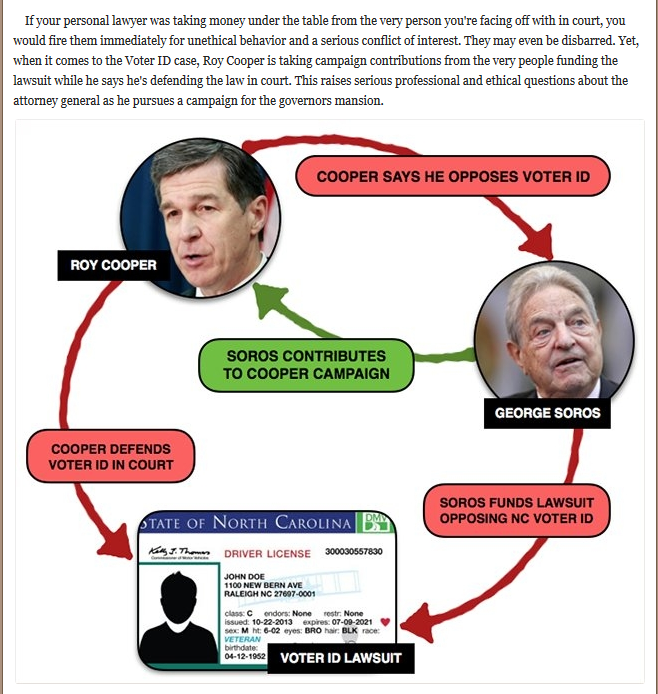