Well, well, well…. though financial media will say this is remarkably unexpected, it is something CTH specifically predicted we would see – and it is happening exactly on the timeline CTH anticipated. 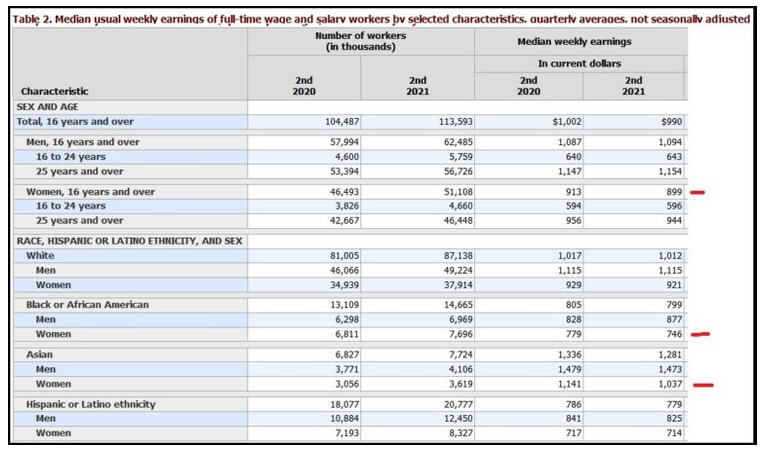 Combine a 1.2% decline in earned wages with a 5.4% overall inflation rate recently reported {Go Deep},  and what you get is a 6.6% drop in real income amid the working class.  That, my friends, is exactly what we said should be expected.  That is also why the JoeBama administration needs to pump more money into the system (human infrastructure spending) in order to stop people from realizing just how bad it is.

You cannot have declining wages and massive inflation and expect the middle-class to survive.  Additionally, when I said six weeks ago that we had just passed peak home value, this is another data point to bolster that prediction.  We are in a plateau period on macro-level real home values, from this point they start dropping.  You cannot have near double digit drops in real income and simultaneously expect people to afford high mortgages.  It just doesn’t happen.

The declining wage rates, and the more substantive drop in real wage rates due to massive inflation, are specifically hitting the lower tier of the working class harder.  Yet despite this,  Biden is intent on importing even more economic migrants to put even more downward pressure on wages for the working class.

These are very real outcomes of policy.  Working class Blacks and Latinos will feel this even more, yet this is the special interest group that Democrats claim to support.  The reality is exactly opposite from the narrative sold by the Biden administration.

The only hope we have for the future economy of America is to elect conservative Republicans to Congress next year. RINO’s might as well be Democrats–they won’t help. Look at the voting record of your House of Representatives member or Senator if they are up for election, and then decide whether to support them. There is still time to recruit conservatives for public office.