CBS News reported yesterday that on Thursday night Israel launched a SpaceX Falcon 9 from Cape Canaveral. The rocket launched an Indonesian communications satellite into orbit and carried a small Israeli spaceship that is scheduled to land on the moon in April. The mission is privately-funded.

If successful, the $100 million mission will put Israel in an exclusive club, joining the United States, the Soviet Union/Russia and China as only the fourth nation in space history to pull off a powered landing on the moon.

“This is going to be the first private interplanetary mission that’s going to go to the moon. This is a big milestone,” said Yonatan Winetraub, co-founder of SpaceIL, the non-profit that is promoting the mission to boost STEM education initiatives across Israel.

“This is going to be the first time that it’s not going to be a superpower that’s going to go to the moon. This is a huge step for Israel.”

The article describes the Israeli spaceship and its mission:

Landing on the moon’s Mare Serenitatis is targeted for April 11. During the final descent to the surface, a magnetometer will measure the local magnetic field before the main engine shuts down at an altitude of about 16 feet. From there, the spacecraft will free fall to the surface.

Beresheet is equipped with a high-resolution camera to capture panoramic views of the landing site to help scientists better understand the area. The spacecraft also carries a small “time capsule” loaded with cultural artifacts, including a copy of the Bible engraved on a coin-size disk.

“We have a vision to show off Israel’s best qualities to the entire world,” said Sylvan Adams, a Canadian-Israeli businessman and philanthropist who contributed to the SpaceIL project and is an enthusiastic, if unofficial, “ambassador.”

Payloads aside, the Falcon 9 launching was of vital importance to NASA, helping clear the way for the March 2 launch of a SpaceX Crew Dragon astronaut ferry ship on an unpiloted test flight to the International Space Station. NASA plans to hold a flight readiness review Friday.

Space exploration is moving to the private sector.

The Washington Times posted an article yesterday that included some recent quotes by Congresswoman-elect Alexandria Ocasio-Cortez. The lady is obviously very impressed with herself. I wonder if she realizes that she is one of 435 members of the House of Representatives.

The New York Democrat told reporters on Friday that once again the U.S. is “at the brink, at the cusp of an abyss” that requires citizens of a special kind of mettle. She says that such an elite group exists — and that she and other newly elected Democrats are in it.

“This is not just about a Green New Deal, this is about a new deal for the United States of America,” the 29-year-old said at a “Sunrise Movement” press conference in Washington. “Because in every moment where our country has reached the depths of darkness, in every moment, when we were at the brink, at the cusp of an abyss, and we did not know if we could be capable of saving ourselves, we have.”

“We’ve done what we thought was impossible. We went to the moon,” she added. “We electrified the nation. We established civil rights. We enfranchised the country. We dug deep and we did it. We did it when no one else thought that we could. That’s what we did when so many of us won an election this year. That’s what so many of us did.”

I believe that if you look back at history, the Republicans passed the Civil Rights Act of 1964. The Democrats in the Senate staged a 75-day filibuster against the measure. I don’t think you can say that the Democrats established civil rights.

This is a picture of the voting taken from the govtrack website: 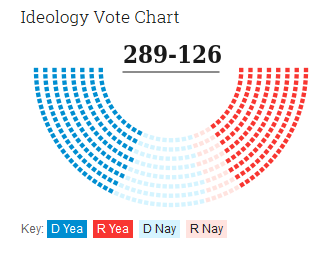 I look forward to many more interesting statements from Representative Ocasio-Cortez.