One of the problems we are seeing in recent years is the concept that there are different rules for different classes of people. We have seen state governments at pricey restaurants without a mask while declaring everyone else should wear a mask and stay home. We have seen elected politicians take advantage of beauty salons while denying access to those salons to everyone else. We have seen the World Economic Forum arrive at Davos for their meeting in private jets while telling the rest of us we need to reduce our carbon footprint. On Tuesday, however, Microsoft outdid itself.

Layoffs are plaguing the tech industry left and right, but that doesn’t mean the big-wigs have to suffer too. Ahead of laying off several thousand employees, Microsoft hosted an exclusive Sting concert at Davos for executives.

The Wall Street Journal reported earlier this week that the concert was about 50 people, including executives from Microsoft, who got to enjoy the musings of English rock artist Sting. The concert reportedly occurred on Tuesday in Davos, Switzerland at the World Economic Forum and the following day the company announces its largest sweep of layoffs yet—10,000 employees. Microsoft CEO Satya Nadella issued a memo to staff on Wednesday announcing the layoffs, some of which began the same day.

I realize that a company is permitted to layoff people whenever necessary, but to me this seems like a misuse of money. How much income did the concert at Davos generate? How much did it cost? If the money had been spent on salaries of employees, how much money would that have generated?

Microsoft says that the layoffs will last through Q3 of 2023, and that the blow will only impact 5% of the company’s workforce. The burn of these layoffs is exacerbated not only by the execs living it up in Switzerland, but also due to the company backtracking on its claims that talk of layoffs was simply hearsay. A Microsoft spokesperson told Gizmodo in an email earlier this week that layoffs at the company were a “rumor.”

Layoffs have hit the tech industry far and wide over the past several months, with some of the titans like Microsoft and Google making huge cuts to their workforce while citing economic uncertainty. Amazon also wound up announcing a plan to cut thousands of positions earlier this month.

On Thursday, Townhall.com posted an article about speaking fees collected by Bill Clinton during the time that Hillary Clinton was Secretary of State. You have to hand it to Bill and Hillary, regardless of what in the world goes on in their marriage, they know how to wash each other’s hands financially. She had amazing profits on cattle futures while he was leading Arkansas, and he had amazing speaking fees while she was Secretary of State. Wow. What an incredible coincidence.

This is the chart from the article that tells it all? 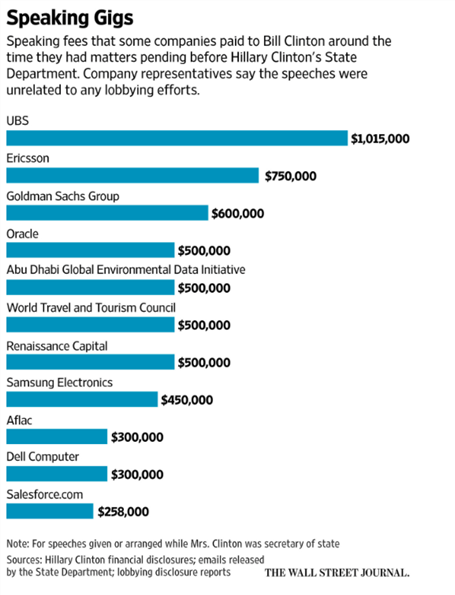 Note the last sentence before the numbers. Company representatives say the speeches were unrelated to any lobbying efforts. Sure they were.

Mr. Clinton also had a large payday from Oracle Corp.: a total of $500,000 for two talks given or approved while Mrs. Clinton was secretary of state. He gave one in October 2012 as the company was urging the State Department to increase the number of skilled-worker visas being issued, lobbying reports show.

Mrs. Clinton has long supported increasing skilled-worker visas, known as H-1B visas, as did her husband when he was president. The issue has remained mired in the broader congressional debate about immigration.

In 2009, the Biotechnology Industry Organization lobbied the State Department to get diplomats to oppose rules against genetically modified foods. In December, Mrs. Clinton sent a cable to diplomats telling them to “pay particular attention” to countries considering biotech regulation and to push an “active biotech agenda” that would “protect the interests of U.S. farmers and exporters,” according to a copy released by WikiLeaks.

Five months later, the biotechnology group paid Mr. Clinton $175,000 to appear at its convention. After Mrs. Clinton left the State Department, she also spoke at the trade group’s convention, earning $335,000.

Seriously, haven’t we had enough of Clinton scandals? Do we really want to go through this with a President Clinton again?