It is no surprise to anyone that the media is acting as cheerleaders for the Biden administration. Currently that job is rather difficult–rising gas prices, rising inflation, supply chain issues, open borders, Afghanistan, vaccine mandates, the end of American energy independence, saber rattling by our enemies, etc. It’s not a pretty picture. However, in true Biden administration fashion, the President is meeting with the media to try to change their spin on the various crises rather than trying to solve the problems.

On Tuesday, The Daily Caller posted an article about the Biden White House’s attempts to persuade the media to report on the disasters the Biden administration is creating with a more positive spin.

The White House has been working with major news outlets “behind the scenes” to “reshape coverage” on the economic crisis, according to CNN.

The administration has been “briefing major newsrooms over the past week” while “discussing with newsrooms trends pertaining to job creation, economic growth, supply chains, and more,” CNN reports, citing an anonymous source.

The administration has argued that “the country’s economy is in much better shape than it was last year.” CNN reported the conversations have “been productive, with anchors and reporters and producers getting to talk with the officials.”

The article quotes a Dana Milbank article where he states that the press has done more negative reporting on President Biden than it did on President Trump:

“Sure, Biden has had his troubles, with the delta variant, Afghanistan and inflation,” Milbank continued. “But the economy is rebounding impressively, he has signed major legislation, and he has restored some measure of decency, calm and respect for democratic institutions.”

A recent CBS News/YouGov poll found that three out of 10 Americans think the country is doing “somewhat well” under Biden. Biden received a higher disapproval rating when polled on the economy, immigration, race relations and inflation.

News coverage of Biden’s first 100 days in office were “modestly more negative than positive,” according to a Pew Research Center study.

Gaslighting at its best. After a while, you just wonder what the media is looking at that they continuously get things so wrong. Would someone please list the accomplishments of President Biden for me.

The Washington Examiner reported yesterday that President Biden has received less negative press coverage than any president in the past thirty years. Obviously he has gotten some negative coverage from conservative news sources, but the mainstream media has chosen to ignore the crisis at the southern border, the increasingly frequent senior moments, and the outright lies in the stories told and the credit claimed for the coronavirus vaccine and its rollout.

The study found that about 19% of the coverage of Biden’s fir 60 days days has been negative over the first 60 days of his administration, which ranked best among presidents of the last three decades. Former Presidents Bill Clinton (28%), George W. Bush (28%), Barack Obama (20%), and Donald Trump (62%) all saw more negative coverage than Biden.

“While the media landscape has changed dramatically since Clinton’s presidential inauguration, the Center has been able to conduct a long-term comparison for each of the recent administrations across a smaller subset of outlets and variables,” Pew Research Center wrote of its findings.

The difference in coverage between the early days of Trump’s presidency compared to Biden’s was particularly stark, with negative stories about Trump outnumbering positive ones by a “four-to-one” ratio.

The article notes an interesting difference in how President Trump and President Biden were covered by the media:

“Another stark difference in the early coverage of the Biden and Trump administrations was in how stories were framed,” Pew wrote. “About two-thirds of Biden stories (65%) were framed around ideology and agenda, while about one-third (35%) focused on leadership and character. With Trump, the numbers were roughly reversed, with 74% framed around leadership and character and 26% around policy and ideology.”

Unfortunately Americans will be reaping the results of the Biden agenda in the near future. I don’t think it will be fun. 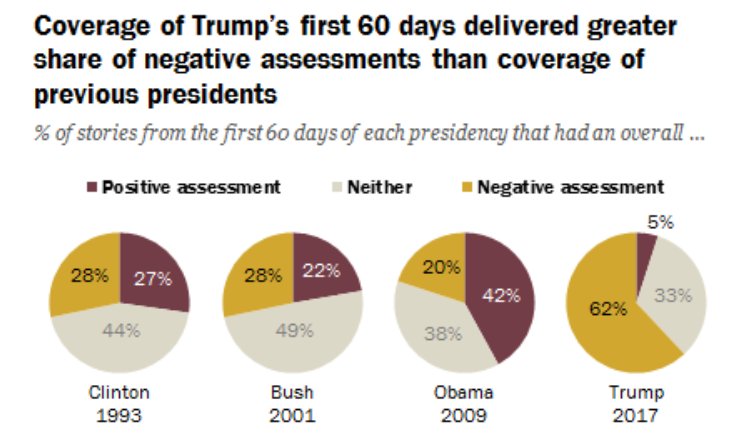