Yesterday The National Review posted an article about some recent statements by Boston Mayor Marty Walsh.

Walsh said $3 million would be immediately transferred from overtime for city police to the Boston Public Health Commission. The mayor will also propose that the City Council divert 20 percent of the polices’s overtime budget, or around $12 million, to other programs.

Is there anyone who actually believes this is going to make Boston safer?

However, Walsh also praised the city police department, noting that use of force complaints dropped by 50 percent from 2013 to 2019. Over the same period, the crime rate dropped by 30 percent and the number of arrests dropped by one third.

“They have made this progress…by lifting people up, not locking people up,” Walsh said. “They, too, want to be a part of the solution, and they continue to deserve our respect and gratitude.”

Calls have grown to “defund” police forces across the country following the death of George Floyd, an African American man killed during arrest by Minneapolis officers. Massive demonstrations protesting Floyd’s death have spread across the country, devolving into riots and looting in some cities, including Boston.

At the same time, African Americans have also seen a higher mortality rate from coronavirus infections than in the general population.

This is pandering. The Mayor knows that moving the money away from the police department is not going to make anyone safer–in fact, it may put some neighborhoods in danger. This decision is bowing to the pressure of the mob that is currently running wild.

Yesterday Breitbart posted an article about the demands Black Lives Matter is making in Boston. George Floyd’s death was a horrible tragedy, but it seems that it has become nothing more than an excuse for special interest groups to shake down American cities.

The Boston, Massachusetts, chapter of Black Lives Matter (BLM) is asking that $15 million in American taxpayer money be spent on providing summer jobs to illegal aliens.

In a list of demands posted by the BLM Boston, the organization demands the city spend millions on creating thousands of summer jobs — some of which would be given to 14 to 22-year-old illegal aliens:

These are the demands:

We demand that Mayor Marty Walsh cut the police budget by 10% from $414 million to $372 million or less, including cutting at least $40 million from the Police Department’s $60 million overtime budget. Those funds should be reinvested in the needs of Black and Brown communities, including providing housing and jobs to people released from prison. [Emphasis added]

In addition, we demand that funds are reinvested in youth jobs during a global pandemic and economic crisis. The City should fund $15 million for 5000 summer jobs and 1000 year-round jobs lasting from September to June, including hiring 14-22 year olds, hiring undocumented young people, and providing grants to organizations. Mayor Walsh, CFO Emme Handy, and Director Justin Sterritt: meet with young people immediately to discuss protecting young people this summer! [Emphasis added]

Every year, hundreds of thousands of illegal aliens are added to the U.S. population in addition to about 1.2 million legal immigrants who permanently resettle in the country and another more than one million foreign visa workers who arrive to take American jobs.

The results have stifled upward mobility in wages and employment for, specifically, black Americans. Research in the past has revealed that every ten percent increase in the immigrant share of an occupation reduces the wages of black American men by about five percent.

Likewise, every one percent increase in the immigrant share of an occupation reduces overall American weekly wages by about 0.5 percent, researcher Steven Camarotta has found. This means the average native-born American worker today has their weekly wages reduced by perhaps 8.5 percent because of current legal immigration levels.

I think we need to increase police budgets and give the police anything they need to keep a protest from becoming a riot. BLM obviously does not understand that the requests they are making would harm the black community rather than help them.

Violence is a problem in America (just as it is in most countries). Gun violence is often the problem cited because it is the most obvious. Some of the people who want to fight gun violence seem to have lost the concept of common sense.

This is a chart from a website called Gun Facts: 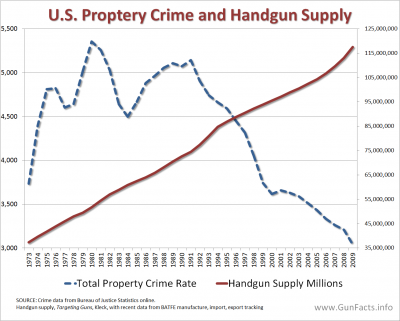 There is a lot of good information on the site. Here are a few of the facts cited:

Fact: Felons report that they avoid entering houses where people are at home because they fear being shot. 8

Please visit the site to check the sources on the footnotes.

All this brings me to a story from CBS Boston posted on Thursday. Boston Mayor Marty Walsh and Police Commissioner William Evans have formulated a plan to reduce gun violence in Boston. The first step of the plan involves sending a letter to all gun owners.

The letter will give gun owners information about reporting a private gun sale, loss or theft. It also advertises a free gun lock, a program that offers a $200 gift card if a firearm owner turns in their weapon and advice on gun storage.

“As a legal gun owner, it is important that you also do your part to ensure that guns are stored safely, and kept out of the hands of children and criminals,” the letter states.

“We must think creatively in order to reduce the amount of illegal guns and violence on our streets,” Walsh said.

The city will also reach out to gun vendors about preventing illegal firearm sales.

I fully support safety courses for people who own guns, but the people who legally own guns are not the problem. Statistics show that crime goes down when more people legally own guns. Boston’s problem won’t be solved by buying back guns–it might be solved by allowing more of its upstanding citizens to own guns and ending the hassle Massachusetts puts you through to get a gun permit. Sometimes you just wonder who comes up with these ideas.